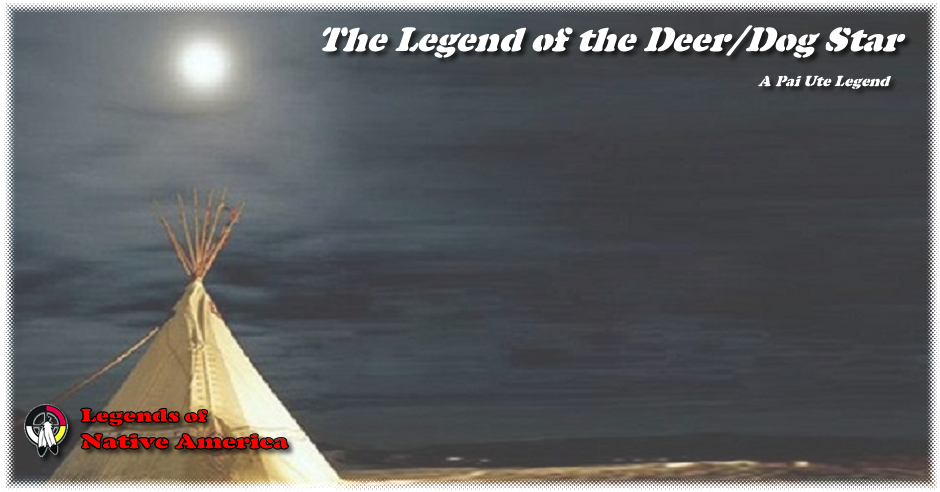 The Paiute Indians in the desert hills have this story of the bright star that may be seen low down in the eastern sky about sunrise of summer mornings -- the star we know as Sirius, in the constellation Canis Major, commonly called the "dog-star."

A long time ago, one of their young men attempted to run down a deer. All the village watched them as they ran across the desert, away over the rim of the world into the sky. There they were changed, the deer and the runner, to a star. Since that time the Indians say that the best deer-hunting is to be had when the "deer-star" is in the sky; and this is really true.

Hear now a tale of the deer-star,
Tale of the days agone,
When a youth rose up for the hunting

In the bluish light of dawn
Rose up for the red deer hunting,
And what should a hunter do
Who has never an arrow feathered,

Nor a bow strung taut and true?
The women laughed from the doorways,
the maidens mocked at the spring;
For thus to be slack at the hunting is ever a shameful thing.

The old men nodded and muttered,
but the youth spoke up with a frown:
"If I have no gear for the hunting,
I will run the red deer down."

He is off by the hills of the morning,
By the dim, untrodden ways;
In the clean, wet, windy marshes
He has startled the deer agraze;

And a buck of the branching antlers
Streams out from the fleeing herd,
And the youth is apt to the running
As the tongue to the spoken word.

They have gone by the broken ridges,
by mesa and hill and swale,
Nor once did the red deer falter,
nor the feet of the runner fail;

So lightly they trod on the lupines
that scarce were the flower-stalks bent,
And over the tops of the dusky sage
the wind of their running went.

They have gone by the painted desert,
Where the dawn mists lie uncurled,

And over the purple barrows
On the outer rim of the world.

The people shout from the village,
And the sun gets up to spy

The royal deer and the runner,
Clear shining in the sky.

And ever the hunter watches for the rising of that star
When he comes by the summer mountains
where the haunts of the red deer are,

When he comes by the morning meadows
where the young of the red deer hide;
He fares him forth to the hunting
while the deer and the runner bide.