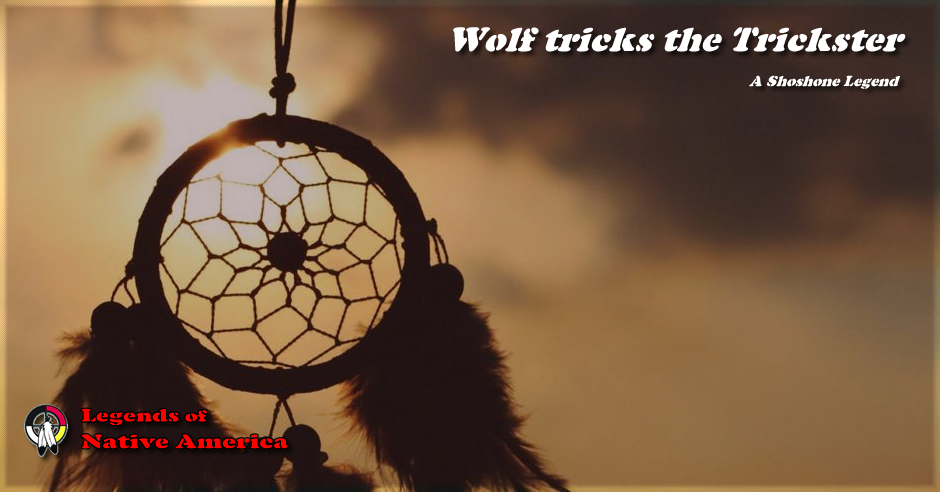 The Shoshoni people saw the Wolf as a creator God and they respected him greatly. Long ago, Wolf, and many other animals, walked and talked like man.

Coyote could talk, too, but the Shoshoni people kept far away from him because he was a Trickster, somebody who is always up to no good and out to double-cross you.

Coyote resented Wolf because he was respected by the Shoshoni. Being a devious Trickster, Coyote decided it was time to teach Wolf a lesson. He would make the Shoshoni people dislike Wolf, and he had the perfect plan. Or so he thought.

One day, Wolf and Coyote were discussing the people of the land. Wolf claimed that if somebody were to die, he could bring them back to life by shooting an arrow under them. Coyote had heard this boast before and decided to put his plan into action.

Wearing his most innocent smile he told Wolf that if he brought everyone back to life, there would soon be no room left on Earth. Once people die, said Coyote, they should remain dead. If Wolf takes my advice, thought Coyote, then the Shoshoni people would hate Wolf, once and for all. Wolf was getting tired of Coyote constantly questioning his wisdom and knew he was up to no good, but he didn't say anything. He just nodded wisely and decided it was time to teach Coyote a lesson.

A few days after their conversation, Coyote came running to Wolf. Coyote's fur was ruffled and his eyes were wide with panic. Wolf already knew what was wrong: Coyote's son had been bitten by Rattlesnake and no animal can survive the snake's powerful venom.

Coyote pleaded with Wolf to bring his son back to life by shooting an arrow under him, as he claimed he could do. Wolf reminded Coyote of his own remark that people should remain dead. He was no longer going to bring people back to life, as Coyote had suggested.

The Shoshoni people say that was the day Death came to the land and that, as a punishment for his mischievous ways, Coyote's son was the first to die. No one else was ever raised from the dead by Wolf again, and the people came to know sadness when someone dies. Despite Coyote's efforts, however, the Shoshoni didn't hate Wolf. Instead, they admired his strength, wisdom and power, and they still do today.