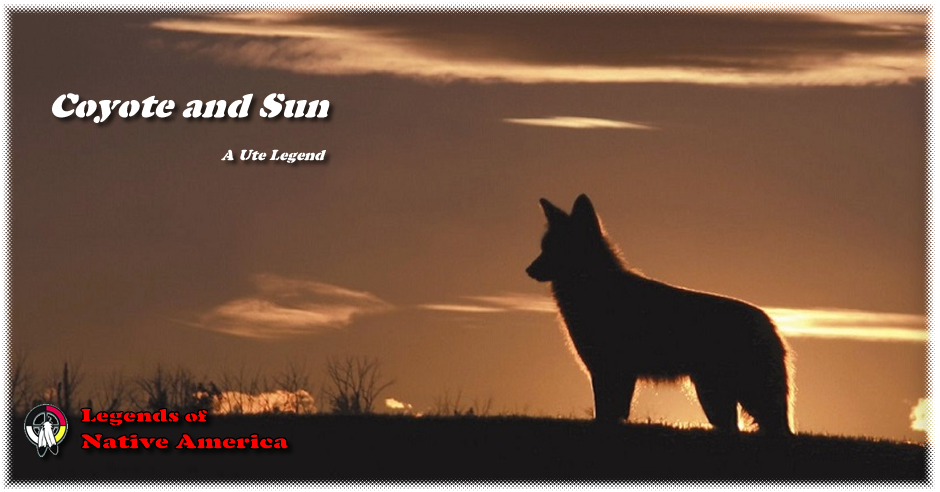 Along time ago, Coyote wanted to go to the sun. He asked Pokoh, Old Man, to show him the trail. Coyote went straight out on this trail and he traveled it all day. But Sun went round so that Coyote came back at night to the place from which he started in the morning.

The next morning, Coyote asked Pokoh to show him the trail. Pokoh showed him, and Coyote traveled all day and came back at night to the same place again. But the third day, Coyote started early and went out on the trail to the edge of the world and sat down on the hole where the sun came up. While waiting for the sun he pointed with his bow and arrow at different places and pretended to shoot. He also pretended not to see the sun. When Sun came up, he told Coyote to get out of his way.

Coyote told him to go around; that it was his trail. But Sun came up under him and he had to hitch forward a little. After Sun came up a little farther, it began to get hot on Coyote's shoulder, so he spit on his paw and rubbed his shoulder. Then he wanted to ride up with the sun. Sun said, "Oh, no"; but Coyote insisted. So Coyote climbed up on Sun, and Sun started up the trail in the sky. The trail was marked off into steps like a ladder. As Sun went up he counted "one, two, three," and so on. By and by Coyote became very thirsty, and he asked Sun for a drink of water.

Sun gave him an acorn-cup full. Coyote asked him why he had no more. About noontime, Coyote became very impatient. It was very hot. Sun told him to shut his eyes. Coyote shut them, but opened them again. He kept opening and shutting them all the afternoon.

At night, when Sun came down, Coyote took hold of a tree. Then he clambered off Sun and climbed down to the earth.