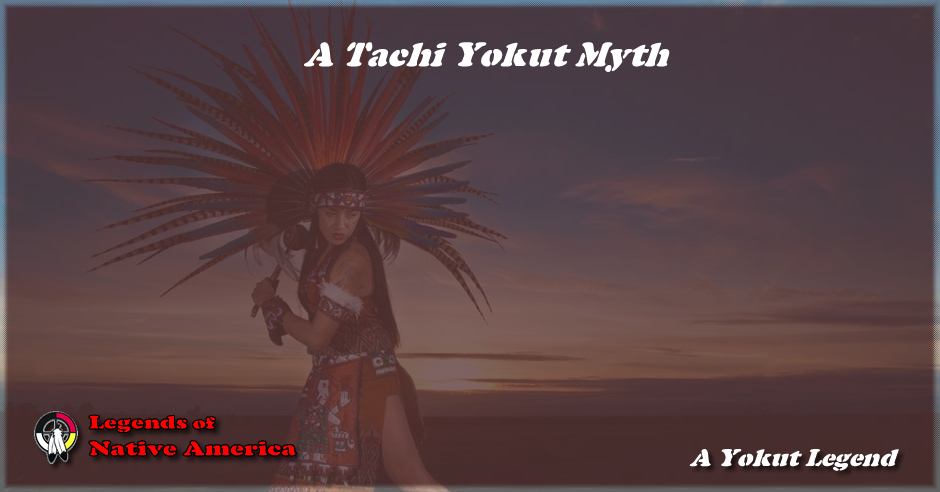 A Tachi had a fine wife who died and was buried. Her husband went to her grave and dug a hole near it. There he stayed watching, not eating, using only tobacco. After two nights he saw that she came up, brushed the earth off herself, and started to go to the island of the dead. The man tried to seize her but could not hold her. She went southeast and he followed her. Whenever he tried to hold her she escaped.

He kept trying to seize her, however, and delayed her. At daybreak she stopped. He stayed there, but could not see her. When it began to be dark the woman got up again and went on. She turned westward and crossed Tulare Lake (or its inlet). At daybreak the man again tried to seize her but could not hold her. She stayed in the place during the day. The man remained in the same place, but again he could not see her. There was a good trail there, and he could see the footprints of his dead friend and relatives. In the evening his wife got up again and went on. They came to a river which flows westward towards San Luis Obispo, the river of the Tulamni (the description fits the Santa Maria, but the Tulamni are in the Tulare drainage, on and about Buena Vista lake).

There the man caught up with his wife and there they stayed all day. He still had nothing to eat. In the evening she went on again, now northward. Then somewhere to the west of the Tachi country he caught up with her once more and they spent the day there. In the evening the woman got up and they went on northward, across the San Joaquin river, to the north or east of it. Again he overtook his wife. Then she said: 'What are you going to do? I am nothing now. How can you get my body back? Do you think you shall be able to do it?' He said: 'I think so.' She said: 'I think not. I am going to a different kind of a place now.' From daybreak on that man stayed there. In the evening the woman started once more and went down along the river; but he overtook her again. She did not talk to him. Then they stayed all day, and at night went on again.

Now they were close to the island of the dead. It was joined to the land by a rising and falling bridge called ch'eleli. Under this bridge a river ran swiftly. The dead passed over this. When they were on the bridge, a bird suddenly fluttered up beside them and frightened them. Many fell off into the river, where they turned into fish. Now the chief of the dead said: 'Somebody has come.' They told him: 'There are two. One of them is alive; he stinks.' The chief said: 'Do not let him cross.' When the woman came on the island, he asked her: 'You have a companion?' and she told him: 'Yes, my husband.' He asked her: 'Is he coming here?' She said, 'I do not know. He is alive.' They asked the man: 'Do you want to come to this country?' He said: 'Yes,' Then they told him: 'Wait, I will see the chief.' They told the chief: 'He says that he wants to come to this country. We think he does not tell the truth.' 'Well, let him come across.' Now they intended to frighten him off the bridge. They said: 'Come on. The chief says you can cross.' Then the bird (kacha) flew up and tried to scare him', but did not make him fall off the bridge into the water. So they brought him before the chief. The chief said: 'This is a bad country. You should not have come. We have only your wife's soul (itit). She has left her bones with her body. I do not think we can give her back to you.' In the evening they danced. It was a round dance and they shouted. The chief said to the man: 'Look at your wife in the middle of the crowd. Tomorrow you will see no one.'

Now the man stayed there three days. Then the chief said to some of the people: 'Bring that woman. Her husband wants to talk to her.' They brought the woman to him. He asked her: 'Is this your husband?' She said.- 'Yes.' He asked her: 'Do you think you will go back to him?' She said: 'I do not think so. What do you wish?' The chief said: 'I think not. You must stay here. You cannot go back. You are worthless now.' Then he said to the man: 'Do you want to sleep with your wife?' He said: 'Yes, for a while. I want to sleep with her and talk to her.' Then he was allowed to sleep with her that night and they talked together. At daybreak the woman was vanished and he was sleeping next to a fallen oak. The chief said to him: 'Get up. It is late.' He opened his eyes and saw an oak instead of his wife. The chief said: 'You see that we cannot make your wife as she was. She is no good now. It is best that you go back. You have a good country there.' But the man said: 'No, I will stay.' The chief told him: 'No, do not. Come back here whenever you like, but go back now.'

Nevertheless he man stayed there six days. Then he said: 'I am going back.' Then in the morning he started to go home. The chief told him: 'When you arrive, hide yourself. Then after six days emerge and make a dance.' Now the man returned. He told his parents: 'Make me a small house. In six days I will come out and dance.' Now he stayed there five days. Then his friends began to know that he had come back. 'Our relative has come back,' they all said. Now the man was in too much of a hurry. After five days he went out. In the evening he began to dance and danced all night, telling what he saw.

In the morning when he had stopped dancing, he went to bathe. Then a rattlesnake bit him. He died. So be went back to island. He is there now. It is through him that the people know it is there. Every two days the island becomes fall. Then the chief gathers the people. 'You must swim,' he says. The people stop dancing and bathe. Then the bird frightens them, and some turn to fish, and some to ducks; only a few come out of the water again as people. In this way room is made when the island is too full. The name of the chief there is Kandjidji.