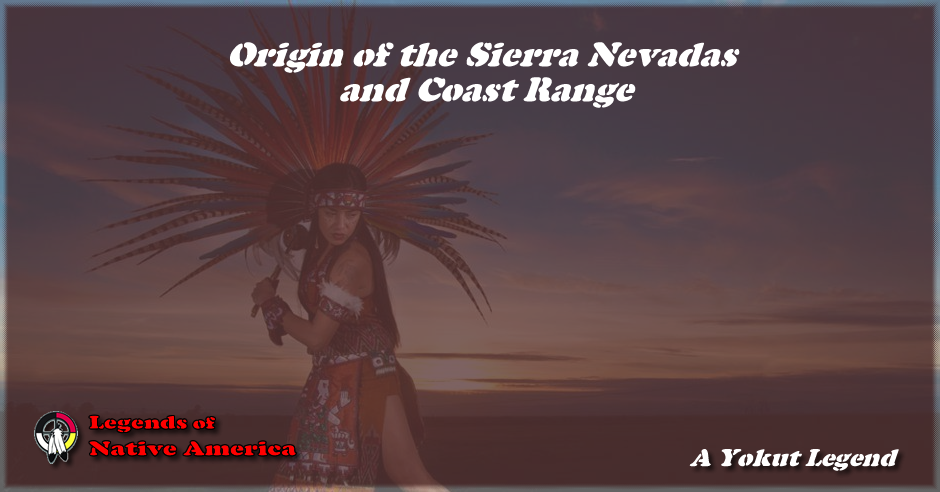 Once there was a time when there was nothing in the world but water. About the place where Tulare Lake is now, there was a pole standing far up out of the water, and on this pole perched Hawk and Crow.

First Hawk would sit on the pole a while, then Crow would knock him off and sit on it himself. Thus they sat on the top of the pole above the water for many ages. At last they created the birds which prey on fish. They created Kingfisher, Eagle, Pelican, and others. They created also Duck. Duck was very small but she dived to the bottom of the water, took a beakful of mud, and then died in coming to the top of the water. Duck lay dead floating on the water. Then Hawk and Crow took the mud from Duck's beak, and began making the mountains.

They began at the place now known as Ta-hi-cha-pa Pass, and Hawk made the east range. Crow made the west one. They pushed the mud down hard into the water and then piled it high. They worked toward the north. At last Hawk and Crow met at Mount Shasta. Then their work was done. But when they looked at their mountains, Crow's range was much larger than Hawk's.

Hawk said to Crow, "How did this happen, you rascal? You have been stealing earth from my bill. That is why your mountains are the biggest." Crow laughed.

Then Hawk chewed some Indian tobacco. That made him wise. At once he took hold of the mountains and turned them around almost in a circle. He put his range where Crow's had been. That is why the Sierra Nevada Range is larger than the Coast Range.