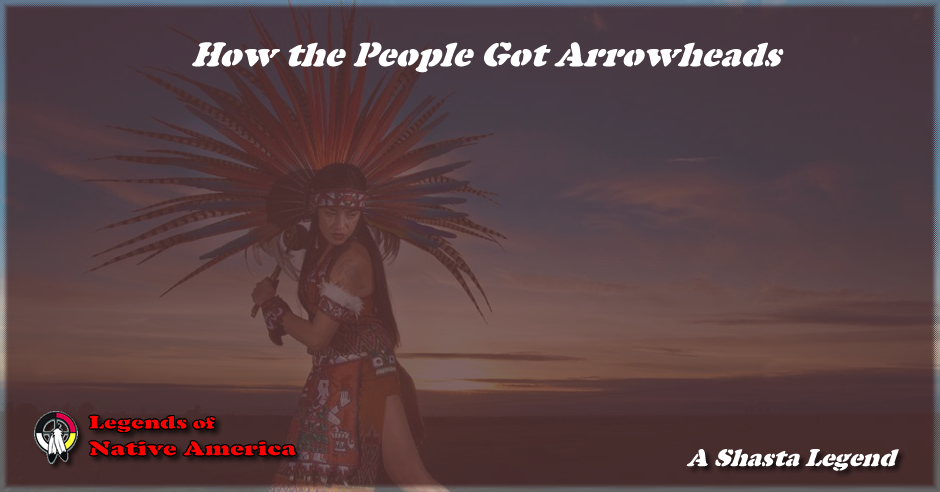 In the days when the first people lived, they used to go hunting with arrows that had pine-bark points. They did not know where to get obsidian, or they would have used it, for obsidian made a sharp, deadly point which always killed the animals that were shot.

"Sit down," Grizzly Bear said. "Let me sit in your lap. Feed me those roots by the handful."

Ground Squirrel was very much afraid of huge Grizzly Bear, so he did as he was told. Grizzly Bear gobbled the roots and got up. "Obsidian Old Man's mother cleaned roots for someone," he said as he went away.

"Tomorrow we will both go to find roots," he said.

So early the next morning they set off. Obsidian Old Man hid near the place where Ground Squirrel started digging. Soon Ground Squirrel's basket was filled, and then along came Grizzly Bear.

"I am sick. I am bruised because that great fellow sat upon me. Really, I am sick," he was groaning.

Obsidian Old Man was sorry for Ground Squirrel. "I'll go and get wood," he said to himself. "But I'll watch him, for he may be fooling me. These people are very clever."

So he went for wood, and on the way he thought, "I had beter to back and look."

When he crept back softly and peeped in, he saw Ground Squirrel lying there, groaning.>o> "He is really sick,! Obsidian Old Man said to himself, and went off in earnest--this time for wood.

But Ground Squirrel was very clever; he had been fooling all the time. As soon as Obsidian Old Man was far away, he got up. Taking all the obsidian points and typing them up in a bundle, he ran off.

As sson as Obsidian Old Man returned, he missed Ground Squirrel. He dropped the wood, ran after him, and almost caught him, but Ground Squirrel ran into a hole in the ground. As he went, he kicked the earth into the eyes of the old man, who was digging fast, trying to catch him.

After a while Obsidian Old Man gave up and left. Ground Squirrel came out the other end of the hole, crossed the lake, and went home.

He emptied the bundle of points on the ground and distributed them to everyone. All day long the people worked, tying them onto arrows. They threw away all the old bark points, and when they were hunting they used the new arrow points and killed a great many deer.