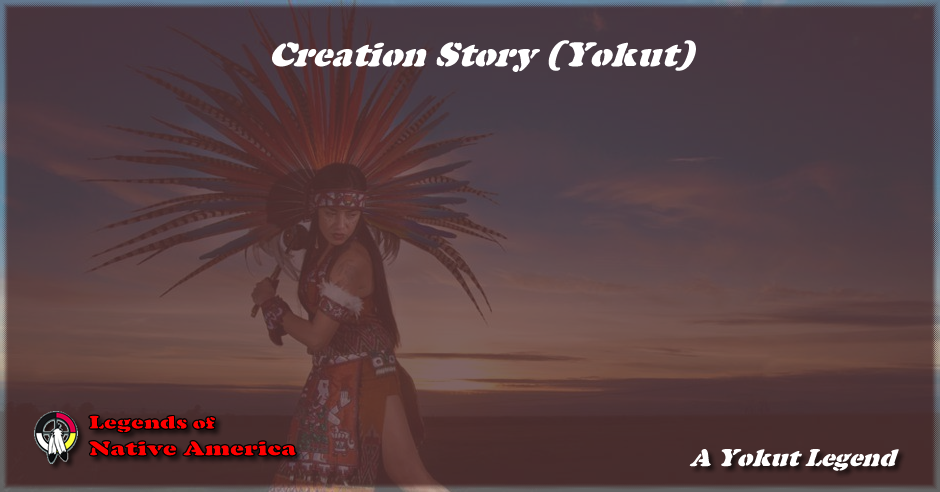 A Great Flood had occurred upon Earth long, long ago. While Earth was still covered with water, there were no living creatures upon the land.

Then out of the sky one day glided an enormous Eagle with a black Crow riding upon its back, searching for a place to light.

Around and around Eagle flew until he discovered a projecting tree stump, or what appeared to be a stump, upon which he landed to rest. There was a home at last upon the flat surface, which was amply large enough for Eagle and Crow to roost upon.

From here, they surveyed the greenish gray water as far as they could see. The sky was a gorgeous bright blue with a few white drifting clouds, occasionally swirled by a passing breeze. All seemed serene to Eagle and Crow.

Small fish were visible below the water, sometimes leaping out of the sea playfully. Hunger caused Eagle and Crow to swoop down, catching a meal for themselves from time to time. Soon a game developed between the two birds to see which one would be the winner in the fish-catching contest. Upon their return to the stump, however, they always shared the reward.

Because of Eagle's great size and wingspan, he soared to great heights and surveyed widely, as the two birds often flew in opposite directions exploring for land. But no land did they find. No other flying creatures did they see. But they always returned to their home base on the tree stump.

Between them, they wondered "How can we possibly think of a way to make land?"

"We know we cannot dive deep enough to find dirt, and the fish are of no help except to provide food."

Day after day these scenes were repeated, exploring in search of land or wondering how to create land, only to return to their stump and catch more fish.

One morning soon thereafter and much to their surprise, a Duck was swimming around and around their stump.

Occasionally, it dived deep in the water, rose to the surface chewing small fish, twisting its head from side to side trying to swallow its meal. One time, Duck emerged with more mud than fish in its mouth.

Eagle and Crow bird talked excitedly about this! "Can Duck possibly bring up enough mud for us to build land?" they wondered.

How could they let Duck know that mud was what they needed most?

An idea occurred to Eagle, which he bird talked to Crow, "If we supply fish for Duck, maybe he will bring up more mud than fish."

By trial and error, the two birds caught fish for Duck, placing them at the edge of the stump, until Duck learned that the fish were for him in exchange for mud!

When Duck appeared on the surface after a deep dive, Eagle and Crow brushed off the mud from Duck's bill and his body with their wings. Progress was slow but steady.

Gradually, Eagle had a pile of mud on his side of the stump and Crow had a similar pile on his side. Each placed fish on his own side for Duck, who now responded by carrying more and more mud to Eagle and Crow. This became a great game of fish-and-mud exchange.

Duck worked very hard, consequently he was always hungry. The birds were surprised at how large each one's mud pile grew every day. In bird talk they said, "Duck is helping us to make a new world. This we will share equally."

Occasionally, Eagle and Crow flew toward the horizon, exploring for any new signs of land. But they returned with nothing new to report; however, they noticed a slight lowering of water around the tree stump.

"Surely, the flood must be coming to an end," Crow and Eagle bird talked.

Each day they watched for a change in the waterline. Each day their piles of mud seemed higher and higher.

Faithful Duck kept up his good work as Eagle and Crow caught fish for him and scraped off mud from him for each side of the new world.

Another time, Eagle flew high and far in search of dry land, not returning until late. The sun set and darkness enveloped his world on the stump. Next morning, to Eagle's surprise, he saw how much more mud he had acquired, and he was pleased. But after looking across at Crow's mud pile, Eagle was astounded to see that Crow had given himself twice as much mud while Eagle was away.

"Was this Crow's idea of sharing the new world equally?" accused Eagle.

Of course, they quarrelled all that day and the next over Crow's unfairness. But the following day, they went back to work making their new land. Eagle decided that he must catch up. He caught two fish for Duck and put them in his usual place. Duck responded by bringing up mud twice to Eagle in exchange for his two fish. All three worked very hard for many, many moons.

Gradually, Eagle's half of the new world became taller and taller than Crow's half, even though Crow seemed to work just as hard as Eagle. Duck was faithful to his task, never tiring in his effort to supply mud. Of

course, Duck continued to give Eagle twice as much mud for his two fish. Crow never seemed to notice why Eagle's half became higher and higher than his half.

One morning, as the sun rose brightly, the two birds looked down through the water and saw what appeared to be land!

"So that is where Duck finds the mud," they bird talked. They were pleased to see that the water was subsiding. How they hoped that soon they would be high and dry on their new world. 0

But all was not so easy, for that very night lightning flashed across the waters and thunder rolled and rolled from one horizon to the other followed by a heavy, drenching rain. Eagle and Crow sought shelter in

holes they dug into the sides of their mud piles. All night long the rain continued to fall, washing away much of the new world into the sea.

As the rain stopped and the sun rose, Eagle and Duck looked out upon the waters and saw an arc of many colours reaching from one edge of the horizon across the sky to the other horizon. This brilliant display

held their eyes in wonderment. What did it mean? They marvelled at how long the colours lingered in the sky.

Eagle flew toward the scene for a closer look, returning when the arc disappeared.

In bird talk, Eagle and Crow decided that the storm of the night before must have been a clearing shower.

They began their land- building project again, hoping that Duck would resume his work as mud-carrier. Soon the sun's rays burned strong and hot, packing the mud until it was hard. Duck appeared and the team of three continued to build the two halves of the new world.

In retelling this creation story, Yokut tribal historians always claim that Eagle's half became the mighty Sierra Nevada Mountains. They also tell how Crow's half became known as the Coast Mountain Range.

Yokut historians end their tale by saying that people everywhere honour the brave and strong Eagle, while Crow is accorded a lesser place because of his unfair disposition displayed during the creation of the new world by Eagle and Crow.