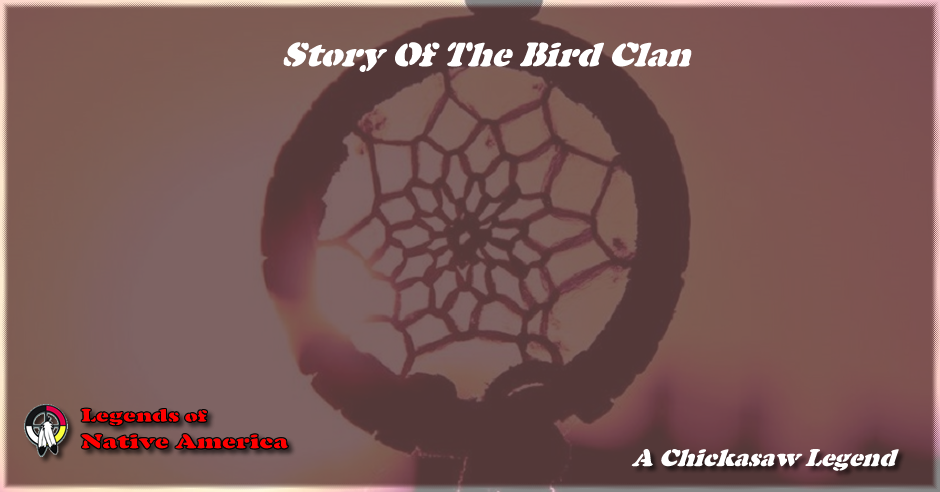 This clan was not very numerous. Their origin was not known for some time, but finally it was discovered. There were some people living on two neighboring hills, but for a long time it was not thought that these had inhabitants.

These hills were thought uninhabited because other people did not see how they could get down from them to hunt. When they found that they actually were inhabited they thought that the occupants mush have wings, and so they called them Birds.

They were people who were up and off before day. They did not have many peculiar customs. They were like real birds in that they would not bother anybody. They usually had many wives, and they had a good custom of not marrying anyone outside of their clan or those belonging to another house group. A woman might belong to the very same clan as a man, but if her house name was different from his he would not marry her.

The reason was that they did not want to mix their blood with that of other people. They kept to the ways of their ancestors without disturbing anyone else. They were satisfied with what had been handed down to them. The people of this clan had different sorts of minds, just as there are different species of birds.

Some have homes and some have not, as is the case with birds. It seems as though the best people of the Bird clan were wiser than any others. They do not work at all, but have an easy time going through life and go anywhere they want to.

They have many offspring as birds have. They do whatever they desire, and when anything happens to them they depend on persons of their own house group without calling in strangers.

This is the end of the story of the Birds, although much more might be written about them.

Story Of The Bird Clan
A Chickasaw Legend
John R. Swanton, 44th Annual Report of the Bureau of American Ethnology, 1926