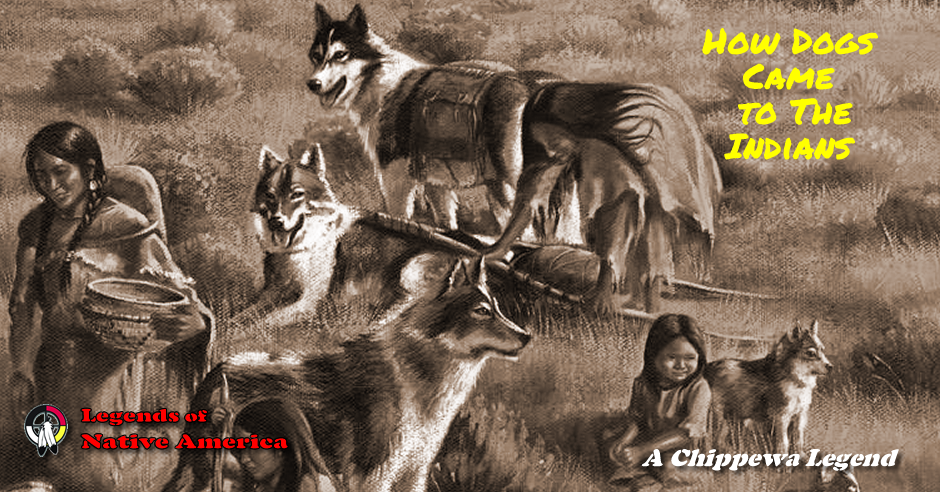 Two Ojibwa Indians in a canoe had been blown far from shore by a great wind. They had gone far and were hungry and lost. They had little strength left to paddle, so they drifted before the wind.

At last their canoe was blown onto a beach and they were glad, but not for long.

Looking for the tracks of animals, they saw some huge footprints which they knew must be those of a giant. They were afraid and hid in the bushes. As they crouched low, a big arrow thudded into the ground close beside them.

Then a huge giant came toward them. A caribou hung from his belt, but the man was so big that it looked like a rabbit. He told them that he did not hurt people and he like to be a friend to little people, who seemed to the giant to be so helpless.

He asked the two lost Indians to come home with him, and since they had no food and their weapons had been lost in the storm at sea, they were glad to go with him. An evil Windigo spirit came to the lodge of the giant and told the two men that the giant had other men hidden away in the forest because he like to eat them.

The Windigo pretended to be a friend, but he was the one who wanted the men because he was an eater of people. The Windigo became very angry when the giant would not give him the two men, and finally the giant became angry too. He took a big stick and turned over a big bowl with it.

A strange animal which the Indians had never seen before lay on the floor, looking up at them. It looked like a wolf to them, but the giant called the animal 'Dog.' The giant told him to kill the evil Windigo spirit. The beast sprang to its feet, shook himself, and started to grow, and grow, and grow. The more he shook himself, the more he grew and the fiercer he became. He sprang at the Windigo and killed him; then the dog grew smaller and smaller and crept under the bowl.

The giant saw that the Indians were much surprised and please with Dog and said that he would give it to them, though it was his pet. He told the men that he would command Dog to take them home. They had no idea how this could be done, though they had seen that the giant was a maker of magic, but they thanked the friendly giant for his great gift. The giant took the men and the dog to the seashore and gave the dog a command. At once it began to grow bigger and bigger, until it was nearly as big as a horse.

The giant put the two men onto the back of the dog and told them to hold on very tightly. As Dog ran into the sea, he grew still bigger and when the water was deep enough he started to swim strongly away from the shore.

After a very long time, the two Ojibwa began to see a part of the sea coast which they knew, and soon the dog headed for shore. As he neared the beach, he became smaller and smaller so that the Indians had to swim for the last part of their journey.

The dog left them close to their lodges and disappeared into the forest. When the men told their tribe of their adventure, the people though that the men were speaking falsely. "Show us even the little mystery animal, Dog, and we shall believe you," a chief said.

A few moons came and went and then, one morning while the tribe slept, the dog returned to the two men. It allowed them to pet it and took food from their hands. The tribe was very much surprised to see this new creature. It stayed with the tribe.