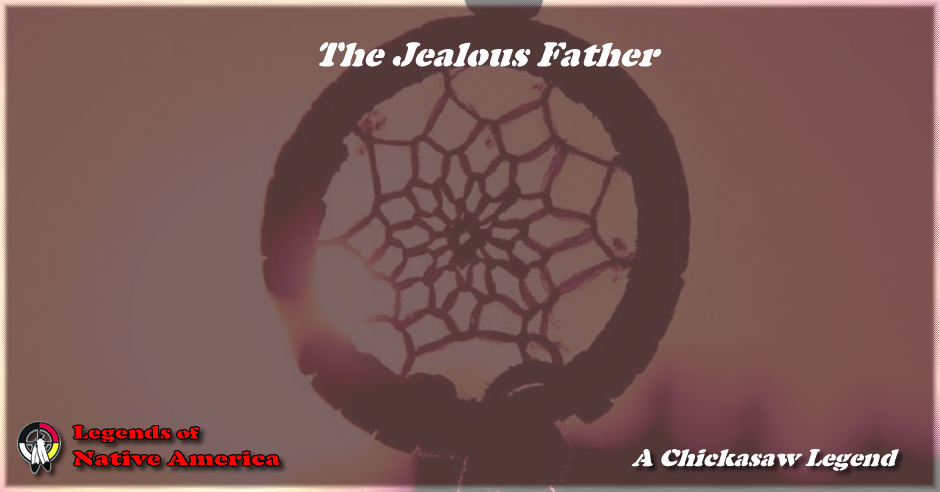 Once there was an old man named Aioswé who had two wives. When his son by one of these women began to grow up, Aioswé became jealous of him.

One day, he went off to hunt and when he came back, found marks on one of the women (the co-wife with his son's mother) which proved to him that his son had been on terms of intimacy with her.

One day the old man and the boy went to a rocky island to hunt for eggs. Wishing to get rid of his son, the old man persuaded him to gather eggs farther and farther away from the shore. The young man did not suspect anything until he looked up and saw his father paddling off in the canoe. "Why are you deserting me, father? "he cried.

"Because you have played tricks on your stepmother," answered the old man.

When the boy found that he was really left behind, he sat there crying hour after hour. At last, Walrus appeared. He came near the island and stuck his head above the water. "What are you crying for, my son?" said Walrus.

"My father has deserted me on this island and I want to get home to the mainland. Will you not help me to get ashore?" the boy replied.

Walrus said that he would do so willingly. "Get on my back," said Walrus, "and I will take you to the mainland." Then Walrus asked Aioswé's son if the sky was clear. The boy replied that it was, but this was a lie, for he saw many clouds. Aioswé's son said this because he was afraid that Walrus would desert him if he knew it was cloudy. Walrus said, "If you think I am not going fast enough, strike on my horns [tusks] and let me know when you think it is shallow enough for you to get ashore, then you can jump off my back and walk to the land."

As they went along, Walrus said to the boy, "Now my son, you must let me know if you hear it thunder, because as soon as it thunders, I must go right under the water." The boy promised to let Walrus know. They had not gone far, when there came a peal of thunder. Walrus said, "My son, I hear thunder." "Oh, no, you are mistaken," said the boy who feared to be drowned, "what you think is thunder is only the noise your body makes going so quickly through the water." Walrus believed the boy and thought he must have been wrong.

Some time later, there came another peal of thunder and this time, Walrus knew he was not mistaken, he was sure it was thunder. He was very angry and said he would drop Aioswé's son there, whether the water was shallow or not. He did so but the lad had duped Walrus with his lies so that he came where the water was very shallow and the boy escaped, but Walrus was killed by lightning before he could reach water deep enough to dive in. This thunderstorm was sent to destroy Walrus by Aioswé's father, who conjured for it. Walrus, on the other hand, was the result of conjuring by his mother, who wished to save her son's life.

When Aioswé's son reached the shore, he started for home, but he had not gone far before he met an old woman, who had been sent as the result of a wish for his safety by his mother (or was a wish for his safety on his mother's part, personified). The old woman instructed the lad how to conduct himself if he ever expected to reach his home and mother again. "Now you have come ashore there is still a lot of trouble for you to go through before you reach home," said she, and she gave him the stuffed skin of an ermine (weasel in white winter coat). "This will be one of your weapons to use to protect yourself," were her words as she tendered him this gift, and she told him what dangers he would encounter and what to do in each case.

Then the son of Aioswé started for his home once more. As he journeyed through the forest he came upon a solitary wigwam inhabited by two old blind hags, who were the result of an adverse conjuration by his father. Both of these old women had sharp bones like) daggers; protruding from the lower arm at the elbow." They were very savage and used to kill everybody they met. When Aioswé's son approached the tent, although the witches could not see him, they knew from their magic powers that he was near. They asked him to come in and sit down, but he was suspicious, for he did not like the looks of their elbows.

He thought of a plan by which he might dupe the old women into killing each other. Instead of going himself and sitting between them he got a large parchment and fixing it to the end of a pole, he poked it in between them. The old women heard it rattle and thought it was the boy himself coming to sit between them.

When the young man had vanquished the two old women he proceeded on his journey. He had not gone very far when he came to a row of dried human bones hung across the path so that no one could pass by without making them rattle. Not far away, there was a tent full of people and big dogs. Whenever they heard anyone disturb the bones, they would set upon him and kill him. The old woman who had advised Aioswé's son told him that when he came to this place he could escape by digging a tunnel in the path under the bones.

When he arrived at the spot he began to follow her advice and burrow under. He was careless and when he was very nearly done and completely out of sight, he managed to rattle the bones. At once, the dogs heard and they cried out, "That must be Aioswé's son." All the people ran out at once, but since Aioswé's son was under ground in the tunnel they could not see him, so after they had searched for a while they returned. The dogs said, "We are sure this is the son of Aioswé," and they continued to search. At length, they found the mouth of the hole Aioswé's son had dug. The dogs came to the edge and began to bark till all the people ran out again with their weapons.

Then Aioswé's son took the stuffed ermine skin and poked its head up. All the people saw it and thought it was really ermine. Then they were angry and killed the dogs for lying. Aioswé's son escaped again and this time he got home. When he drew near his father's wigwam, he could hear his mother crying, and as he approached still closer he saw her. She looked up and saw him coming. She cried out to her husband and co-wife, "My son has come home again."

The old man did not believe it. "It is not possible," he cried. But his wife insisted on it. Then the old man came out and when he saw it was really his son, he was very much frightened for his own safety. He called out to his other wife, "Bring some caribou skins and spread them out for my son to walk on." But the boy kicked them away. "I have come a long way," said he, "with only my bare feet to walk on."

That night, the boy sang a song about the burning of the world and the old man sang against him but he was not strong enough. "I am going to set the world on fire," said the boy to his father, "I shall make all the lakes and rivers boil." He took up an arrow and said, "I am going to shoot this arrow into the woods; see if I don't set them on fire." He shot his arrow into the bush and a great blaze sprang up and all the woods began to burn.

"The forest is now on fire," said the old man, "but the water is not yet burning." "I'll show you how I can make the water boil also," said his son. He shot another arrow into the water, and it immediately began to boil. Then the old man who wished to escape said to his son, "How shall we escape?" The old man had been a great bear hunter and had a large quantity of bear's grease preserved in a bark basket. "Go into your fat basket," said his son, "you will be perfectly safe there."

Then he drew a circle on the ground and placed his mother there. The ground enclosed by the circle was not even scorched, but the wicked old man who had believed he would be safe in the grease baskets, was burned to death.

Aioswé's son said to his mother, "Let us become birds. What will you be?" "I'll be a robin," said she. "I'll be a whisky jack (Canada jay)," he replied. They flew off together.