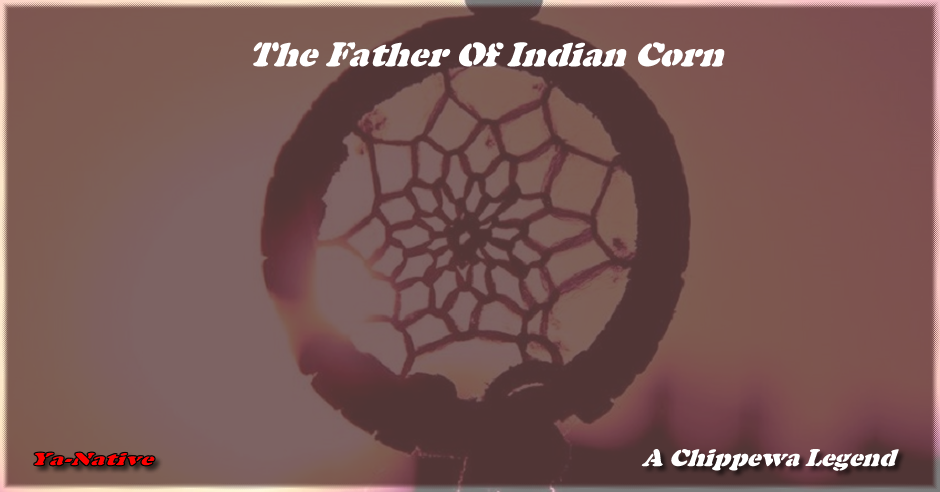 In the long, long ago, a poor Ojibwa Indian lived with his wife and children in a remote part of the present state of Wisconsin. Because he was such a poor hunter, he was not very expert in providing food and supplies for his family.

His children were too young to give him much help. But he was a good man with a kind and contented disposition. He always was thankful to Chief of the Sky Spirits for everything he received to share with his family.

His good disposition was inherited by his eldest son, who had just reached the age when he wanted to pursue his Guardian Spirit Quest. Each young Indian boy looked forward to the time of finding the secret Spirit that would be his guide through his life. Each boy sought to learn his spirit name and what special power would be given him by his Guardian Spirit.

Eldest son had been obedient since early childhood. He seemed pensive, thoughtful of others, mild in manner, and always a joy to his family and to his tribe. At the first indication of spring, tradition told him to build a hut somewhere in an isolated place. There, he would not be disturbed during his dream quest. He prepared his hut and himself and went immediately to begin his fast for seven days.

For the first few days, he amused himself walking in the woods and over the mountain trails. He examined trees, plants, and flowers. This kind of physical effort in the outdoors prepared him for a night of sound sleep. His observations of the day filled his mind with pleasant ideas and dreams.

More and more he desired to know how the trees, plants, flowers, and berries grew. Seemingly they grew wild without much help from the Indians. He wondered why some species were good to eat, while others contained poisonous juices. These thoughts came back to him many times as he retreated to his lodge at night. He secretly wished for a dream that would reveal what he could do to benefit his family and his tribe.

"I believe the Chief of Sky Spirits guides all things and it is to him I owe all things," he thought to himself. "I wonder if Chief Sky Spirit can make it easier for all Indians to acquire enough food without hunting animals every day to eat."

"I must try to find a way in my dreams," he pondered. He stayed on his bed the third day of fasting, because he felt weak and faint. Sometimes he thought that he was going to die. He dreamed that he saw a strong, handsome young man coming down from the sky, advancing toward him. He was richly dressed in green and yellow colors. He wore a plume of waving feathers on his head. His every movement was graceful.

"I have been sent to you," said the sky-visitor. "The Sky Chief who made all things in the sky and upon the Earth intends for me to be your Guardian Spirit and I have come to test you.

"Sky Chief has observed all that you have done to prepare yourself for your Quest. He understands the kind and worthy secret wish of your heart. He knows that you desire a way to benefit your family and your tribe. He is pleased that you do not seek strength to make war. I have come to show you how to obtain your greatest wish. First, your spirit name shall be Wunzh."

The stranger then told Wunzh to arise and wrestle with him. This was the only way for him to achieve his sacred wish. As weak as he was from fasting, Wunzh wondered how he could ever wrestle the stranger.

He rose to the challenge--determined in his heart to die in the effort if he must. The two wrestled. After some time when Wunzh felt nearly exhausted, the Sky Stranger said, "It is enough for today. I will come in tomorrow to test you some more." Smiling, the visitor ascended in the same direction from which he came.

Next day at the same time, the stranger appeared. Again the two wrestled. While Wunzh felt weaker than the day before, he set his mind and heart to his task. His courage seemed to increase, however, in reverse proportion to his waning physical strength. The stranger stopped just in time before Wunzh dropped to the ground.

"Tomorrow will be your last chance. I urge you to be strong, my friend, as this is the only way for you to achieve your heart's sacred wish," said the sky- visitor.

Wunzh took to his bed with his last ounce of energy. He prayed to the Sky Chief for wisdom and enough strength to endure to the end of his Quest.

The third time they wrestled, Wunzh was so weak that his arms and legs felt like rubber. But his inner determination drove him forward with the kind of endurance necessary to win. The same length of time passed as in the first two wrestling bouts. Suddenly the stranger stopped and declared himself conquered by Wunzh!

Then the sky-visitor entered the lodge for the first time. He sat down beside Wunzh to instruct him in the way he should now proceed to achieve his secret wish.

"Great Sky Chief has granted your desire. You have wrestled manfully. Tomorrow will be your seventh day of fasting. Your father will come to see you and bring you food. As it is the last day of your fast, you will be able to succeed.

"Now I will tell you what you must do to achieve your final victory. Tomorrow we will wrestle once more. When you have prevailed over me for the last time, then throw me down and strip off my clothes. You must clean the Earth of roots and weeds and make the ground soft. Then bury me in that very spot, covering me with my yellow and green clothes and then with Earth.

"When you have done this, leave my body in the Earth. Do not disturb it. Come occasionally to see if I have come to life. Be careful to see that no grass or weeds cover my grave. Once a month, cover me with fresh Earth. If you follow what I have told you, you will succeed in your Guardian Spirit Quest. You will help your family and all the Indians by teaching them what I have now taught you," the Sky Stranger concluded as they shook hands and the visitor left.

On the seventh morning, Wunzh's father came with some food.

"My son, how do you feel? You have fasted long enough. It is seven days since you have eaten food. You must not sacrifice your life. The Great Spirit does not require that of you."

"My father, thank you for coming and for the food. Let me stay here alone until the sun goes down. I have my own special reasons."

"Very well. I shall wait for you at home until the hour of the setting sun," replied the father as he departed.

The Sky Stranger returned at the same hour as before. The final wrestling match began. Wunzh had not eaten the food his father brought. But already he felt a new inner power that had somehow been given to him. Was it Spirit Power from his Guardian Spirit?

Wunzh grasped his opponent with supernatural strength and threw him to the ground. Wunzh removed the beautiful clothes and the plume. Then he discovered his friend was dead.

He remembered the instructions in every detail and buried his Guardian Spirit on the very spot where he had fallen. Wunzh followed every direction minutely, believing his friend would come to life again.

Wunzh returned to his father's lodge at sundown. He ate sparingly of the meal his mother prepared for him. Never for a moment could he forget the grave of his friend. Throughout the spring and into summer he visited the grave regularly. He carefully kept the area clean of grass and weeds. He carefully kept the ground soft and pliable. Soon he saw the tops of green plumes emerging through the Earth. He noticed that the more care he gave the plants, the faster the green plumes seemed to grow.

Wunzh concealed his activity from his father. Days and weeks passed. Summer was drawing to a close. Then one day, Wunzh invited his father to follow him to the site of his Quest. He showed his father the graceful-looking plants growing there. They were topped with yellow silken hair and waving green plumes. Gold and green clusters of fruit adorned each side of the stalks.

"Father, these plants are from my dream friend," explained Wunzh. "He is my Guardian Spirit, a friend to all mankind, named Mon-daw-min, meaning 'corn for all Indians.' This is the answer to my Quest, my secret heart's wish. No longer will we need to hunt animals every day for our food. As long as we take care of our corn gift, the Earth will give us good food for our living."

Wunzh pulled off the first ear of corn and give it to his father.

"See, my father. This corn is what I fasted for. The Chief of Sky Spirits has granted my Quest. He has sent us this wonderful new food of corn. From now on our people need not depend entirely upon hunting and fishing to survive."

Wunzh talked with his father, giving him all of the instructions he had received from his Guardian Spirit. He showed his father how the corn husks should be pulled off the stalks, and how the first seed must be saved for future plantings. He explained how the ears of corn should be held before the fire only long enough for the outer leaves to turn brown, so that the inside kernels remained sweet and juicy.

The entire family gathered for Wunzh's feast of corn. The father led a prayer of thanksgiving for the bountiful and good gift from the Chief of Sky Spirits. Wunzh felt happy that his Guardian Spirit Quest was successfully completed.

This is how Wunzh became known as the father of Indian corn by the Chippewa and Ojibwa Indian tribes.