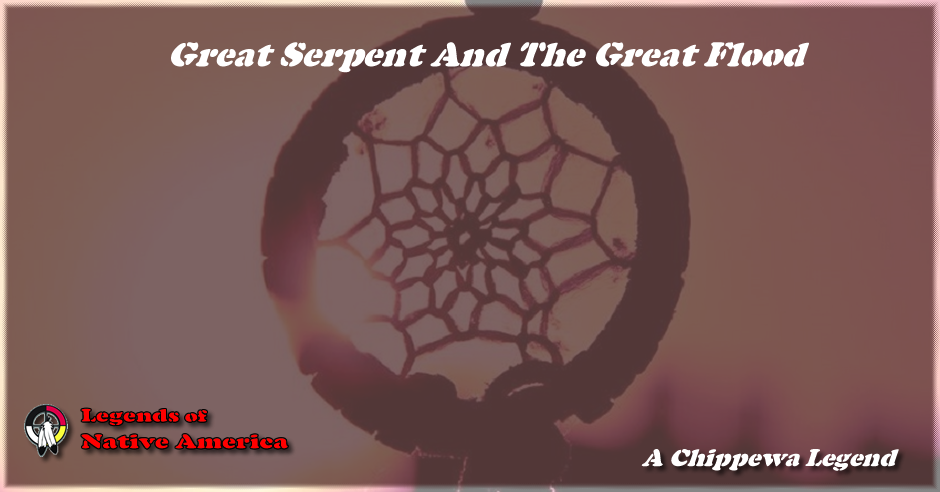 From Maine and Nova Scotia to the Rocky Mountains, Indians told stories about the Great Serpent. More than a century ago the serpent was considered to be "a genuine spirit of evil."

Some version of the story of the Great Flood of long ago, as recounted here, is told around the world.

Nanabozho (Nuna-bozo, accented on bozo) was the hero of many stories told by the Chippewa Indians. At one time they lived on the shores of Lake Superior, in what are now the states of Minnesota and Wisconsin and the province of Ontario.

One day when Nanabozho returned to his lodge after a long journey, he missed his young cousin who lived with him. He called the cousin's name but heard no answer. Looking around on the sand for tracks, Nanabozho was startled by the trail of the Great Serpent. He then knew that his cousin had been seized by his enemy.

Nanabozho picked up his bow and arrows and followed the track of the serpent. He passed the great river, climbed mountains, and crossed over valleys until he came to the shores of a deep and gloomy lake. It is now called Manitou Lake, Spirit Lake, and also the Lake of Devils. The trail of the Great Serpent led to the edge of the water.

Nanabozho could see, at the bottom of the lake, the house of the Great Serpent. It was filled with evil spirits, who were his servants and his companions. Their forms were monstrous and terrible. Most of them, like their master, resembled spirits. In the centre of this horrible group was the Great Serpent himself, coiling his terrifying length around the cousin of Nanabozho.

The head of the Serpent was red as blood. His fierce eyes glowed like fire. His entire body was armed with hard and glistening scales of every color and shade.

Looking down on these twisting spirits of evil, Nanabozho made up his mind that he would get revenge on them for the death of his cousin.

He said to the clouds, "Disappear!"

And the clouds went out of sight.

"Winds, be still at once!" And the winds became still.

When the air over the lake of evil spirits had become stagnant, Nanabozho said to the sun, "Shine over the lake with all the fierceness you can. Make the water boil."

In these ways, thought Nanabozho, he would force the Great Serpent to seek the cool shade of the trees growing on the shores of the lake. There he would seize the enemy and get revenge.

After giving his orders, Nanabozho took his bow and arrows and placed himself near the spot where he thought the serpents would come to enjoy the shade. Then he changed himself into the broken stump of a withered tree.

The winds became still, the air stagnant, and the sun shot hot rays from a cloudless sky. In time, the water of the lake became troubled, and bubbles rose to the surface. The rays of the sun had penetrated to the home of the serpents. As the water bubbled and foamed, a serpent lifted his head above the centre of the lake and gazed around the shores. Soon another serpent came to the surface. Both listened for the footsteps of Nanabozho, but they heard him nowhere.

"Nanabozho is sleeping," they said to one another.

And then they plunged beneath the waters, which seemed to hiss as they closed over the evil spirits.

Not long after, the lake became more troubled. Its water boiled from its very depths, and the hot waves dashed wildly against the rocks on its banks. Soon the Great Serpent came slowly to the surface of the water and moved toward the shore. His blood-red crest glowed. The reflection from his scales was blinding--as blinding as the glitter of a sleet-covered forest beneath the winter sun. He was followed by all the evil spirits. So great was their number that they soon covered the shores of the lake.

When they saw the broken stump of the withered tree, they suspected that it might be one of the disguises of Nanabozho. They knew his cunning. One of the serpents approached the stump, wound his tail around it, and tried to drag it down into the lake. Nanabozho could hardly keep from crying aloud, for the tail of the monster prickled his sides. But he stood firm and was silent.

The evil spirits moved on. The Great Serpent glided into the forest and wound his many coils around the trees. His companions also found shade--all but one. One remained near the shore to listen for the footsteps of Nanabozho.

From the stump, Nanabozho watched until all the serpents were asleep and the guard was intently looking in another direction. Then he silently drew an arrow from his quiver, placed it in his bow, and aimed it at the heart of the Great Serpent. It reached its mark. With a howl that shook the mountains and startled the wild beasts in their caves, the monster awoke. Followed by its terrified companions, which also were howling with rage and terror, the Great Serpent plunged into the water.

At the bottom of the lake there still lay the body of Nanabozho's cousin. In their fury the serpents tore it into a thousand pieces. His shredded lungs rose to the surface and covered the lake with whiteness.

The Great Serpent soon knew that he would die from his wound, but he and his companions were determined to destroy Nanabozho. They caused the water of the lake to swell upward and to pound against the shore with the sound of many thunders. Madly the flood rolled over the land, over the tracks of Nanabozho, carrying with it rocks and trees. High on the crest of the highest wave floated the wounded Great Serpent. His eyes glared around him, and his hot breath mingled with the hot breath of his many companions.

Nanabozho, fleeing before the angry waters, thought of his Indian children. He ran through their villages, shouting, "Run to the mountaintops! The Great Serpent is angry and is flooding the Earth! Run! Run!"

The Indians caught up their children and found safety on the mountains. Nanabozho continued his flight along the base of the western hills and then up a high mountain beyond Lake Superior, far to the north. There he found many men and animals that had escaped from the flood that was already covering the valleys and plains and even the highest hills. Still the waters continued to rise. Soon all the mountains were under the flood, except the high one on which stood Nanabozho.

There he gathered together timber and made a raft. Upon it the men and women and animals with him placed themselves. Almost immediately the mountaintop disappeared from their view, and they floated along on the face of the waters. For many days they floated. At long last, the flood began to subside. Soon the people on the raft saw the trees on the tops of the mountains. Then they saw the mountains and hills, then the plains and the valleys.

When the water disappeared from the land, the people who survived learned that the Great Serpent was dead and that his companions had returned to the bottom of the lake of spirits. There they remain to this day. For fear of Nanabozho, they have never dared to come forth again.