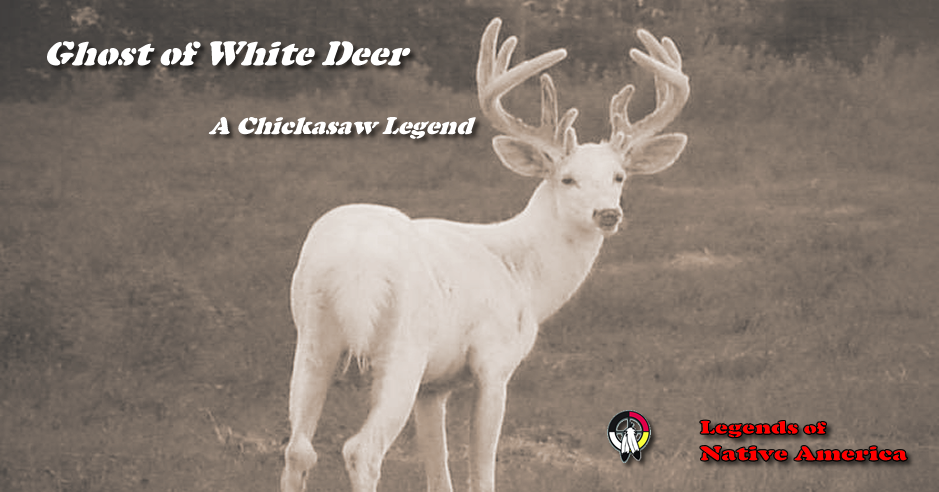 A brave, young warrior for the Chicaksaw Nation fell in love with the daughter of a chief. The chief did not like the young man, who was called Blue Jay. So the chief invented a price for the bride that he was sure that Blue Jay could not pay.

" Bring me the hide of the White Deer, : said the chief. The Chickasaws believed that animals that were all white were magical. "The price for my daughter is one white deer." Then the chief laughed. The chief knew that an all white deer, an albino, was very rare and would be very hard to find. White deerskin was the best material to use in a wedding dress, and the best white deer skin came from the albino deer.

Blue Jay went to his beloved, whose name was Bright Moon. "I will return with your bride price in one moon, and we will be married. This I promise you." Taking his best bow and his sharpest arrows Blue Jay began to hunt.

Three weeks went by, and Blue Jay was often hungry, lonely, and scratched by briars. Then, one night during a full moon, Blue Jay saw a white deer that seemed to drift through the moonlight. When the deer was very close to where Blue Jay hid, he shot his sharpest arrow. The arrow sank deep into the deers heart. But instead of sinking to his knees to die, the deer began to run. And instead of running away, the deer began to run toward Blue Jay, his red eyes glowing, his horns sharp and menacing.

A month passed and Blue Jay did not return as he had promised Bright Moon. As the months dragged by, the tribe decided that he would never return.

But Bright Moon never took any other young man as a husband, for she had a secret. When the moon was shinning as brightly as her name, Bright Moon would often see the white deer in the smoke of the campfire, running, with an arrow in his heart. She lived hoping the deer would finally fall, and Blue Jay would return.

To this day the white deer is sacred to the Chickasaw People, and the white deerskin is still the favorite material for the wedding dress.