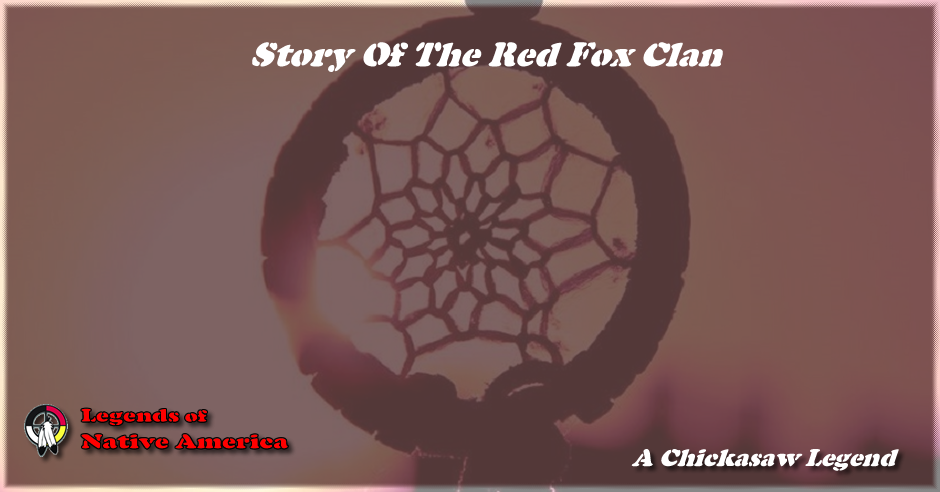 Red Fox (Tcula) was once found in a cave asleep by a hunter. The hunter crept up to him and saw that it was Tcula. As he lay there asleep he looked red all over, and in consequence the hunter called him Red Fox.

From that time on his descendants have been known as the Red Fox clan.

Some time after this Red Fox took up with a woman belonging to the Wildcat clan. Their descendants were known as Tcula homa iksa, and they lived only in the woods. They made a living by stealing from other people, and that was why they wanted to live in the timber continually. If this clan had been handed down through the women, it would have been numerous to-day; but since it depended on the father’s side it did not last long. They kept on stealing until about 1880, when the other people got tired of them and killed nearly all, so that there are now only a few remaining among the Choctaw and Chickasaw.

A person of the Red Fox clan did whatever he liked.

Once a man of this clan went hunting. He did not return that day nor the next day after. In fact he was gone for several days, and presently the people thought something had happened to him and chose three men to send in search of him.

These men at length reached a place where they expected to find him, but when they got close to it he was not there. They discovered that he had taken up with a woman of the Bird clan; that was why he had not returned home. When they at length came to the place where he was living, he told them that he did not think it was harmful to take any woman, whether she was of the same clan or not.

Therefore, when he met this woman and found that he liked her and that she liked him, they lived together. The men told him that it was against the will of his people and contrary to their customs, but he could not be persuaded and after a while they left him. Before he left his people he had already been married. Afterwards he wanted to go back to live with them as he had before, but they would not listen to him.

It was the belief of the people of the Red Fox clan that one should not marry outside, and it was their law that if one did so they would not have anything to do with him. They would not help him in any way but he who obeyed their customs was held in respect among them. They believed that things moved on as was intended by the Creator, but some people did not have any regard for this and did not care what happened to them. The customs and habits of the Red Fox clan are different from those of any other, and the same was true of those of the Double Mountain people. Anyone who wanted to learn their ways must marry one of their women (which, judging by what was said in the last paragraph in the case of the Red Foxes, would seem to have been difficult).

When winter was approaching and these people wanted to go on a hunt, they began their preparations a considerable time in advance. Some of them would get together and decide how many were to go and how long they would be gone.

Then these persons would fast for four days and meanwhile the women would cook food for them to take, enough to last for the time determined upon. They made sacks into which to put cold flour (banaha). While the men were fasting they would not sleep with their wives, for if one did he thought that luck would abandon him and he would kill no deer.

Some would not observe these rules and in consequence they were usually excluded from the party. If such a person were permitted to go, the deer would see him first and run off. But those who obeyed the regulations would have good luck and kill many deer and bear to bring home.

When they killed a deer they dried the meat to last them through the winter. When they went after bear they hunted about until they discovered his lair and then one of the hunters went into it bearing a pine torch.