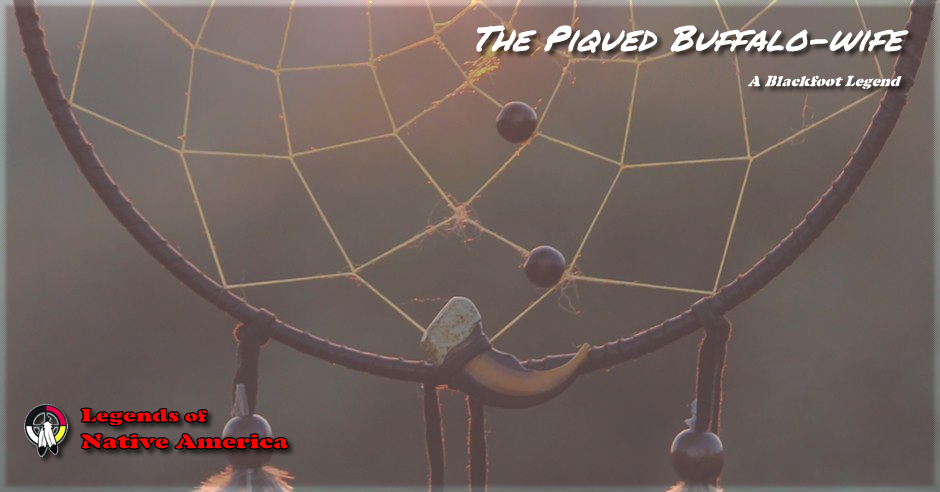 Once a young man went out and came to a buffalo-cow stuck fast in the mire. He took advantage of her situation. After a time she gave birth to a boy.

When he could run about, this boy would go into the Indian camps and join in the games of the children, but would always mysteriously disappear in the evening. One day this boy told his mother that he intended to search among the camps for his father.

Not long after this he was playing with the children of the camps as usual, and went into the lodge of a head man in company with a boy of the family. He told this head man that his father lived somewhere in the camp, and that he was anxious to find him.

As they were coming into the head man's lodge, the boy ran to one of them, embracing his, said, "Here is my father."

After a time the boy told his father that he wished to take him to see his mother. The boy said, "When we come near her, she will run at you and hook four times, but you are to stand perfectly still."

The next day the boy and his father started out on their journey. As they were going along they saw a buffalo-cow, which immediately ran at them as the boy had predicted. The man stood perfectly still, and the fourth time, as the cow was running forward to hook him, she became a woman. Then she went home with her husband and her child. One day shortly after their return, she warned her husband that whatever he might do he must never strike at her with fire.

They lived together happily for many years. She was a remarkably good woman. One evening when the husband had invited some guests, the woman expressed a dislike to prepare food for them, he became very angry and, catching up a stick from the fire, struck at her. As he did so, the woman and her child vanished, and the people saw a buffalo-cow and calf running from the camp.

Now the husband was very sorry and mourned for his wife and child. After a time he went out to search for them. In order that he might approach the buffalo without being discovered, he rubbed himself with filth from a buffalo-wallow.

In the course of time he came to a place where some buffalo were dancing. He could hear them from a distance. As he was approaching, he met his son, who was now, as before, a buffalo-calf. The father explained to the boy that he was mourning for him and his mother and that he had come to take them home.

The calf-boy explained that this would be very difficult, for his father would be required to pass through an ordeal. The calf-boy explained to him that when he arrived among the buffalo and inquired for his wife and son, the chief of the buffalo would order that he select his child from among all the buffalo calves in the herd. Now, the calf boy wished to assist his father and told him that he would know his child by a sign, because when the calves appeared before him, his own child would hold up its tail.

Then the man proceeded until he came to the place where the buffalo were dancing. Immediately he was taken before the chief of the buffalo-herd. The chief required that he first prove his relationship to the child by picking him out from among all the other calves of the herd. The man agreed to this and the calves were brought up. He readily picked out his own child by the sign.

The chief of the buffalo, however, was not satisfied with this proof and said that the father could not have the child until he identified him four times. While the preparations were being made for another test, the calf-boy came to his father and explained that he would be know this time by closing one eye.

When the time arrived, the calves were brought in as before, and the chief of the buffalo directed the father to identify his child, which he did by the sign. Before the next trial the calf-boy explained to his father that the sign would be one ear hanging down.

Accordingly, the calves were brought up for the father to choose, and he again identified his child. Now, before the last trial, the boy came again to his father and notified him that the sign by which he was to be known was dancing and holding up one leg.

Now the calf-boy had a chum among the buffalo-calves and when the calves were called up before the chief so that the father might select his child, the chum saw the calf-boy beginning to dance holding up one leg, and he thought to himself, "He is doing some fancy dancing." So he, also, danced in the same way.

Now the father observed that there were two calves giving the same sign and he realized he had to make a guess and he did so, but the guess was wrong. Immediately the herd rushed upon the man and trampled him into the dust.

Then they all ran away except the calf-boy, his mother, and an old bull. These three mourned together for the fate of the unfortunate man. After a time the old bull requested that they examine the ground to see if they could find a piece of bone.

After a long and careful search they succeeded in finding one small piece that had not been trampled by the buffalo. The bull took this piece, made a sweathouse, and finally restored the man to life.

When the man was restored, the bull explained to him that he and his family would receive some power, some headdresses, some songs, and some crooked sticks, such as he had seen the buffalo carry in the dance at the time when he attempted to pick out his son.

The calf-boy and his mother then became human beings, and returned with the man. It was this man who started the Bull and the Horn societies, and it was his wife who started the Matoki.

The Piqued Buffalo-wife
A Blackfoot Legend