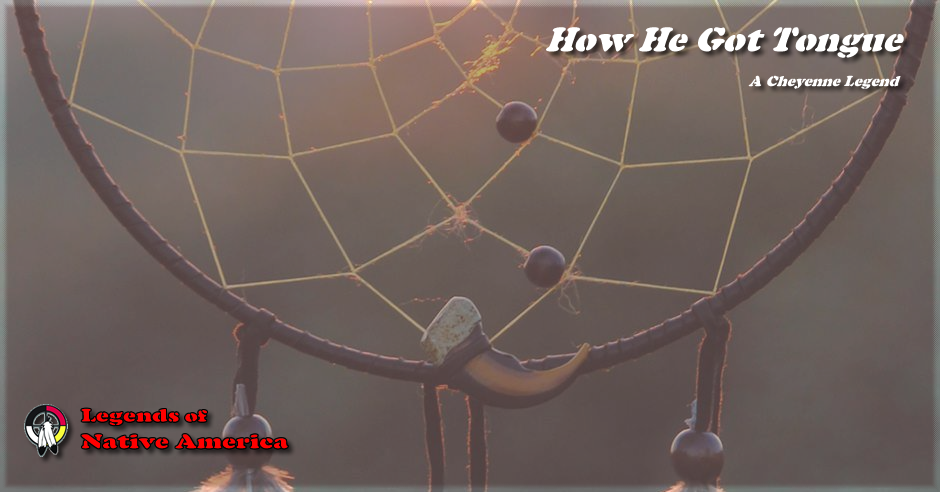 Wihio was living in his home, and not far away was a camp of people. One day he had nothing to eat, and now way to kill anything; so he paid a visit to one of his neighbors, hoping that he would be asked to eat with them.

When Wihio stepped into the lodge he saw that there was plenty of food there--dried meat and back fat and tongues. Every time the man went out he killed an elk, and when he did so he took the tongue out and saved it, and tongues hung all about his lodge. Wihio longed for the tongues but the man did not offer him any; he just gave him some dried meat. As Wihio was returning to his lodge, he saw a coyote not far off, and called to him asking him to come in.

When the coyote had sad down, Wihio told him about what he had seen in the man's lodge, and he asked the coyote to go there with him again, so they might eat there.

The coyote thought the man would not let him come in, because everyone knows that coyotes always steal meat.

"Well," said Wihio, "let us arrange some plan by which you can come. What can we do? How can we get in?" The coyote thought for a long time, and at last he told Wihio how they might do what they wished to. The coytoe said, "You dress up like a woman, and tie me up like a baby, and carry me there. Give me good things to eat when you get the meat."

"Ah," said Wihio, "it is good, I will give you a part of everything that is given to me." Then he began to tie up the coyote like a baby, so that he could carry him. After he had done so, he took up the coyote on his arm like a baby, and went back to the lodge and said to the man, "My child is crying for food." Wihio whispered to the coyote to cry for tongue, and he did so. The man asked Wihio what the baby wanted, and Wihio said, "He is crying for tongue." The man took a tongue and put it in the water and boiled it.

After the tongue was cooked the man gave it to Wihio, who began to eat, and gave the coyote only just a taste of it. Wihio ate all he could, for he was hungry. The coyote kept whispering to him, "Give me some too, I am hungry"; but Wihio continued to eat, and just dipped his fingers in the soup and let the coyote lick them. At last the coyote grew angry and said, "I am going to tell him about you, that you have dressed me up like a baby in order to get some tongue."

Wihio kept eating very fast, and gave the coyote none of the tongue, and at last went out of the lodge, carrying the baby. He went to the river, and said to the coyote, "You were going to tell about me, were you? You ought to keep quiet when I'm eating; you trouble me too much." Then he threw the coyote, all tied up, into the river, and he floated down the stream.