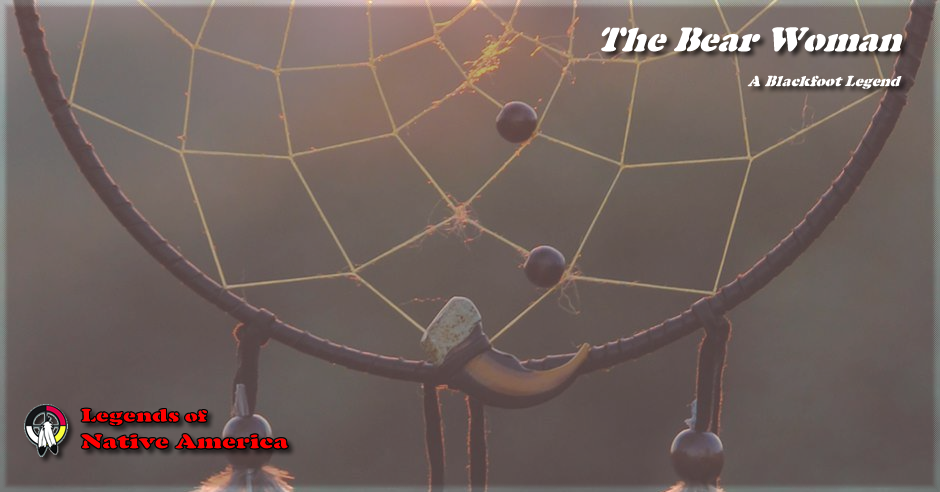 Once there was a young woman with many suitors; but she refused to marry. She had seven brothers and one little sister. Their mother had been dead many years and they had no relatives, but lived alone with their father.

Every day the six brothers went out hunting with their father. It seems that the young woman had a bear for her lover and, as she did not want any one to know this, she would meet him when she went out after wood.

She always went after wood as soon as her father and brothers went out to hunt, leaving her little sister alone in the lodge. As soon as she was out of sight in the brush, she would run to the place where the bear lived.

As the little sister grew older, she began to be curious as to why her older sister spent so much time getting wood. So one day she followed her. She saw the young woman meet the bear and saw that they were lovers. When she found this out, she ran home as quickly as she could, and when her father returned she told him what she had seen. When he heard the story he said, "So, my elder daughter has a bear for a husband. Now I know why she does not want to marry."

Then he went about the camp, telling all his people that they had a bear for a brother-in-law, and that he wished all the men to go out with him to kill this bear. So they went, found the bear, and killed him. When the young woman found out what had been done, and that her little sister had told on her, she was very angry.

She scolded her little sister vigorously, then ordered her to go out to the dead bear, and bring some flesh from his paws. The little sister began to cry, and said she was afraid to go out of the lodge, because a dog with young pups had tried to bite her. "Oh, do not be afraid!" said the young woman. "I will paint your face like that of a bear, with black marks across the: eyes and at the corners of the mouth; then no one will touch you." So she went for the meat. Now the older sister was a powerful medicine76 woman. She could tan hides in a new way. She could take up a hide, strike it four times with her skin-scraper and it would be tanned.

The little sister had a younger brother that she carried on her back. As their mother was dead, she took care of him. One day the little sister said to the older sister, "Now you be a bear and we will go out into the brush to play." The older sister agreed to this, but said, "Little sister, you must not touch me over my kidneys." So the big sister acted as a bear, and they played in the brush. While they were playing, the little sister forgot what she had been told, and touched her older sister in the wrong place.

At once she turned into a real bear, ran into the camp, and killed many of the people. After she had killed a large number, she turned back into her former self. Now, when the little sister saw the older run away as a real bear, she became frightened, took up her little brother, and ran into their lodge. Here they waited, badly frightened, but were very glad to see their older sister return after a time as her true self.

Now the older brothers were out hunting, as usual. As the little sister was going down for water with her little brother on her back, she met her six brothers returning. The brothers noted how quiet and deserted the camp seemed to be. So they said to their little sister, "Where are all our people?" Then the little sister explained how she and her sister were playing, when the elder turned into a bear, ran through the camp, and killed many people.

She told her brothers that they were in great danger, as their sister would surely kill them when they came home. So the six brothers decided to go into the brush. One of them had killed a jack-rabbit. He said to the little sister, "You take this rabbit home with you. When it is dark, we will scatter prickly-pears all around the lodge, except in one place. When you come out, you must look for that place, and pass through."

So the little sister arose quickly, took her little brother on her back, and said, "I am going out to look for wood."

As she went out, she followed the narrow trail through the prickly-pears and met her six brothers in the brush. Then they decided to leave the country, and started off as fast as they could go.

The older sister, being a powerful medicine-woman, knew at once what they were doing. She became very angry and turned herself into a bear to pursue them. Soon she was about to overtake them, when one of the boys tried his power. He took a little water in the hollow of his hand and sprinkled it around. At once it became a great lake between them and the bear.

Then the children hurried on while the bear went around. After a while the bear caught up with them again, when another brother threw a porcupine-tail (a hairbrush) on the ground. This became a great thicket; but the bear forced its way through, and again overtook the children. This time they all climbed a high tree. The bear came to the foot of the tree, and, looking up at them, said, "Now I shall kill you all."

So she took a stick from the ground, threw it into the tree and knocked down four of the brothers. While she was doing this, a little bird flew around the tree, calling out to the children, "Shoot her in the head! Shoot her in the head!" Then one of the boys shot an arrow into the head of the bear, and at once she fell dead. Then they came down from the tree.

Now the four brothers were dead. The little brother took an arrow, shot it straight up into the air, and when it fell one of the dead brothers came to life. This he repeated until all were alive again. Then they held a council, and said to each other, "Where shall we go? Our people have all been killed, and we are a long way from home. We have no relatives living in the world." Finally they decided that they preferred to live in the sky.

The Bear Woman
A Blackfoot Legend