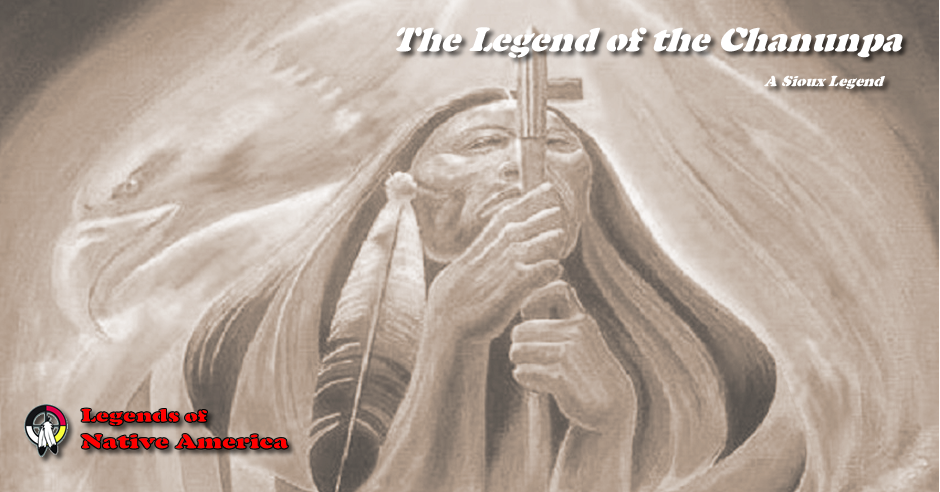 One summer so long ago that nobody knows how long, the Oceti-Shakowin, the seven sacred council fires of the Lakota Oyate, the nation, came together and camped. The sun shone all the time, but there was no game and the people were starving. Every day they sent scouts to look for game, but the scouts found nothing.

Among the bands assembled were the Itazipcho, the Without-Bows, who had their own camp circle under their chief, Standing Hollow Horn. Early one morning the chief sent two of his young men to hunt for game. They went on foot, because at that time the Sioux did not yet have horses. They searched everywhere but could find nothing. Seeing a high hill, they decided to climb it in order to look over the whole country. Halfway up, they saw something coming toward them from far off, but the figure was floating instead of walking. From this they knew that the person was waken, holy.

At first they could make out only a small moving speck and had to squint to see that it was a human form. But as it came nearer, they realized that it was a beautiful young woman, more beautiful than any they had ever seen, with two round, red dots of face paint on her cheeks. She wore a wonderful white buckskin outfit, tanned until it shone a long way in the sun. It was embroidered with sacred and marvelous designs of porcupine quill, in radiant colors no ordinary woman could have made. This wakan stranger was Ptesan-Wi, White Buffalo Woman, also called Ptecincala Ska Wakan Winan. In her hands she carried a large bundle and a fan of sage leaves. She wore her blue-black hair loose except for a strand at the left side, which was tied up with buffalo fur. Her eyes shone dark and sparkling, with great power in them.

The two young men looked at her open-mouthed. One was overawed, but the other desired her body and stretched his hand out to touch her. This woman was lila wakan, very sacred, and could not be treated with disrespect. Lightning instantly struck the brash young man and burned him up, so that only a small heap of blackened bones was left. Or as some say that he was suddenly covered by a cloud, and within it he was eaten up by snakes that left only his skeleton, just as a man can be eaten up by lust.

To the other scout who had behaved rightly, White Buffalo Woman said: "Good things I am bringing, something holy to your nation. A message I carry for your people from the buffalo nation. Go back to the camp and tell the people to prepare for my arrival. Tell your chief to put up a medicine lodge with twenty-four poles. Let it be made holy for my coming."

This young hunter returned to the camp. He told the chief, he told the people, what the sacred woman had commanded. The chief told the eyapaha, the crier, and the crier went through the camp circle calling:
"Someone sacred is coming. A holy woman approaches. Make all things ready for her."

So the people put up the big medicine tipi and waited. After four days they saw the White Buffalo Woman approaching, carrying her bundle before her. Her wonderful white buckskin dress shone from afar. The chief, Standing Hollow Horn, invited her to enter the medicine lodge. She went in and circled the interior sunwise. The chief addressed her respectfully, saying:
"Sister, we are glad you have come to instruct us."

She told him what she wanted done. In the center of the tipi they were to put up an owanka wakan, a sacred altar, made of red earth, with a buffalo skull and a three-stick rack for a holy thing she was bringing.

They did what she directed, and she traced a design with her finger on the smoothed earth of the altar. She showed them how to do all this, then circled the lodge again sunwise. Halting before the chief, she now opened the bundle. the holy thing it contained was the chanunpa, the sacred pipe. She held it out to the people and let them look at it. She was grasping the stem with her right hand and the bowl with her left, and thus the pipe has been held ever since.

Again the chief spoke, saying:
"Sister, we are glad. We have had no meat for some time. All we can give you is water."

They dipped some wacanga, sweet grass, into a skin bag of water and gave it to her, and to this day the people dip sweet grass or an eagle wing in water and sprinkle it on a person to be purified.

White Buffalo Woman showed the people how to use the pipe. She filled it with chan-shasha, red willow-bark tobacco. She walked around the lodge four times after the manner of Anpetu-Wi, the great sun.

This represented the circle without end, the Sacred Hoop, the road of life. The woman placed a dry buffalo chip on the fire and lit the pipe with it. This was peta-owihankeshini, the fire without end, the flame to be passed on from generation to generation. She told them that the smoke rising from the pipe was Tunkashila's breath, the living breath of the great Grandfather Mystery.

White Buffalo Woman showed the people the right way to pray, the right words and the right gestures. She taught them how to sing the pipe-filling song and how to lift the pipe up to the Great Spirit, up toward Father Sky, and down toward Mother Earth, and then to the four directions of the universe.

"With this holy pipe," she said, "you will walk like a living prayer. With your feet resting upon the earth and the pipestem reaching into the sky, your body forms a living bridge between the Sacred Beneath and the Sacred Above. Wakan Tanka smiles upons us, because now we are as one: earth, sky, all living things, the two-legged, the four-legged, the winged ones, the trees, the grasses. Together with the people, they are all related, one family. The pipe holds them all together."

"Look at this pipe," said White Buffalo Woman. "Its stone represents the buffalo, but also the flesh and blood of the red man. The buffalo represents the universe and the four directions, because he stands on four legs, for the four ages of man. The buffalo was put in the west by Wakan Tanka at the making of the world, to hold back the waters. Every year he loses one hair, and in every one of the four ages he loses a leg. The Sacred Hoop will end when all the hair and legs of the great buffalo are gone, and the water comes back to cover the Earth.

The wooden stem of this chanunpa stands for all that grows on the earth. Twelve feathers hanging from where the stem- the backbone- joins the bowl- the skull- are from Wanblee Galeshka, the spotted eagle, the very sacred, who is the Great Spirit's messenger and the wisest of all who cry out to Tunkashila. Look at the bowl. Engraved in it are seven circles of various sizes. They stand for the seven ceremonies you will practice with this pipe, and for the Ocheti Shakowin, the seven sacred campfires of our Lakota nation."

The White Buffalo Woman then spoke to the women, telling them that it was the work of their hands and the fruit of their bodies which kept the people alive. "You are from the Earth Mother," she told them. "What you are doing is as great as what warriors do."

And therefore the sacred pipe is also something that binds men and women together in a circle of love. It is the one holy object in the making of which both men and women have a hand. The men carve the bowl and make the stem; the women decorate it with bands of colored porcupine quills. When a man takes a wife, they both hold the pipe at the same time and red cloth is wound around their hands, thus tying them together for life.