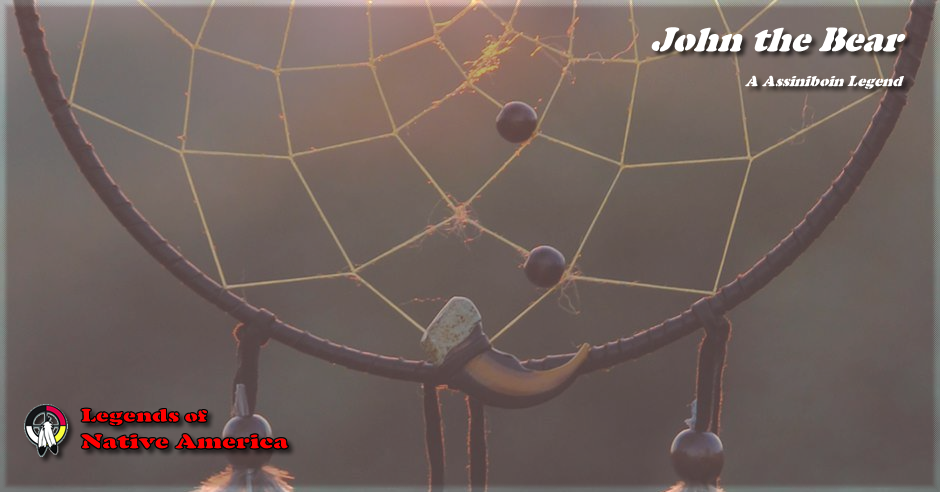 A man was living with his wife. It was summer. The woman was pregnant. One day, while she was picking berries, a big bear saw and abducted the woman, whom he kept in his cave.

Before spring, the woman gave birth to a child begotten by her first husband, but with plenty of hair on his body, wherefore he was called Icmá (Plenty-of-Hair). In the spring the bear came out of his cave.

The boy looked outside and told his mother, "We had better run away to where you first came from."

But the bear had stopped up the entrance with a big rock, and the woman said, "We can't get out, the rock is too heavy."

The boy tried it, and was able to lift it. They fled before the bear returned. They were already near the Indian camp when they heard the bear coming in pursuit. The woman was exhausted, but the boy packed her on his back and ran to the camp. At first, the woman went to a stranger's lodge. Then someone told her husband that his wife was back. The chief then took both her and his son home.

The boy used to play with other boys. Once he quarreled with one of them and killed him with a single blow. This happened again on another occasion. Then Icmá said to his father, "I don't like to kill any more boys; I'll go traveling."

He started out and met two men, who became his comrades. One of them was called Wood-Twister, the other Timber-Hauler. They got to a good lodge, and decided to stay there together. On the first day, Icmá and Wood-Twister went hunting. They bade Timber-Hauler stay home and cook.

While they were away, an ogre that lived in the lodge came out, threw Timber-Hauler on his back, and killed him. The two other men found him dead, but Icmá restored him to life. The next day Icmá said, "Wood-Twister, you stay home, I'll go hunting with Timber- Hauler." At sunset Wood-Twister began cutting firewood.

He saw something coming out of the lodge that looked like a man, but wearing a beard down to its waist and with nails as long as bear-claws. It assaulted Wood-Twister, who was found dying by his friends, but was restored by Icmá. The next day Icmá said "You two go hunting, I will stay home."

As he was beginning to chop wood, the monster appeared and challenged him to fight. Icmá seized its head, cut it off, and left the body in the lodge.

When his comrades returned, Icmá asked them, "Why did not you kill him like this?" Then he said, "I don't like this house; let us, go traveling."

They started out and got to a large camp. The chief said, "My three daughters have been stolen by a subterranean being. Whoever brings them back, may marry them all." Icmá told Timber-Hauler to get wood and ordered Wood-Twister to twist a rope of it. Then he made a hole in the ground and put in a box to lower himself in.

He descended to the underground country and pulled the rope to inform his friends of his arrival. He found the three girls. The first one was guarded by a mountain-lion, the second by a big eagle, the third by giant cannibals. Icmá killed the lion. The girl said, "You had better turn back, the eagle will kill you."

But he slew the eagle. Then the girl said, "The cannibals are bad men, you had better go home."

"I'll wait for them." The twelve cannibals approached yelling; they were as big as trees. The girl said, "Run as fast as you can."

But Icmá remained, and made two slings. With the first he hurled a stone that went clean through six of the men and killed them; and with the other sling he killed the remaining cannibals in the same way. One of the girls gave him a handkerchief, another one a tie, and the youngest one a ring. He took them to his box, and pulled the rope.

His two comrades hoisted up the oldest one. Both wanted to marry her, but Icmá pulled the rope again, and they hauled up the second girl. Then Icmá sat down in the box with the youngest, and pulled the rope.

As they were hauling them up, Wood-Twister said, "Let us cut the rope." The other man refused, but Wood-Twister cut the rope, and Icmá fell down. He stayed there a long time, while his companions took the girls to the chief.

At last Icmá begged a large bird to carry him above ground. The bird said he did not have enough to eat for such a trip. Then Icmá killed five moose, and having packed the meat on the bird's back, mounted with the third girl. Flying up, Icmá fed the bird with moose-meat, and when his supply was exhausted, he cut off his own flesh and gave it to the bird to eat. Icmá came up on the day when his false friends were going to marry the girls.

All the people were gathered there. Icmá arrived, saying, "I should like to go into the lodge before they get married."

When he came in, Wood-Twister was frightened. "I should like to go out, I'll be back in a short time," he said.

But he never returned. Then the chief asked, "Which of you three rescued the girls?" Then Icmá showed the handkerchief, the tie and the ring given him by the girls, and got all the three girls for his wives.