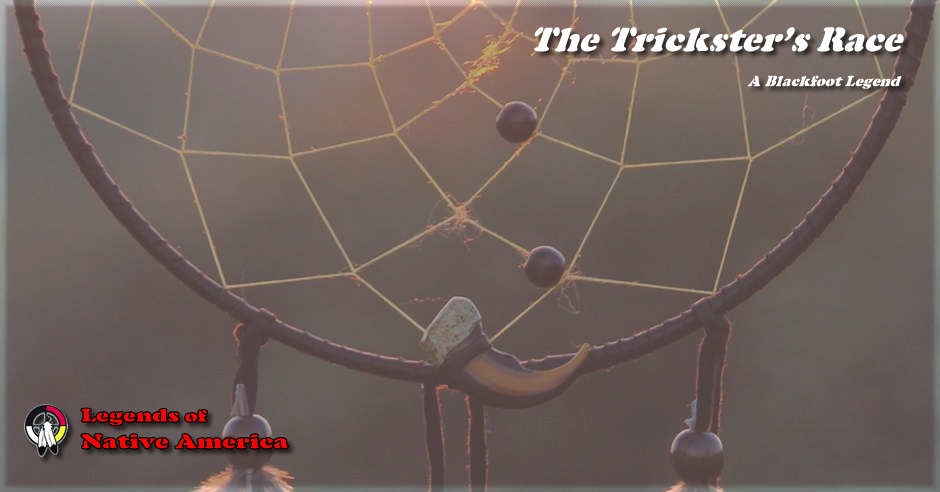 Now Old Man went on and came to a place where deer and elk were playing a game called "Follow your leader." Old Man watched the game a while.

Then he asked permission to play. He took the lead, sang a song, and ran about this way and that, and finally led them up to the edge of a cliff. Old Man jumped down and was knocked senseless. After a while he got up and called to the rest to follow.

Then the elk all jumped down and were killed.

Then Old Man said to the deer, "Now, you jump."

"No," said the deer, "we shall not jump down, because the elk are all killed."

So the deer jumped down and were all killed. Now, when the elk were about to jump over, there was a female elk about to become a mother, and she begged Old Man not to make her jump, so he let her go. A few of the deer were also let go for the same reason. If he had not done this, all the elk and deer would have been killed.

Old Man was now busy butchering the animals that had been killed by falling over the cliff. When he was through butchering, he went out and found a place to camp. Then he carried his meat there and hung it up to dry. When he was all alone, a Coyote came to him. This Coyote had a shell on his neck, and one leg was tied up as if badly hurt. The Coyote said to Old Man, "Give me something to eat."

Old Man said to him, "Give me that shell on your neck to skim the soup, and I will give you something to eat."

Finally Coyote agreed. They were to run to a distant point, then back again. Coyote started out very slow, and kept crying for Old Man to wait, to wait. At last Coyote and Old Man came to the turning-point.

Then Coyote took the bandage off his leg, began to run fast, and soon left Old Man far behind. He began to call out to all the coyotes, the animals, and mice, and they all came rushing up to Old Man's camp and began to eat his meat. It was a long time before Old Man reached the camp; but he kept calling out, "Leave me some meat, leave me some meat.

The Trickster’s Race
A Blackfoot Legend