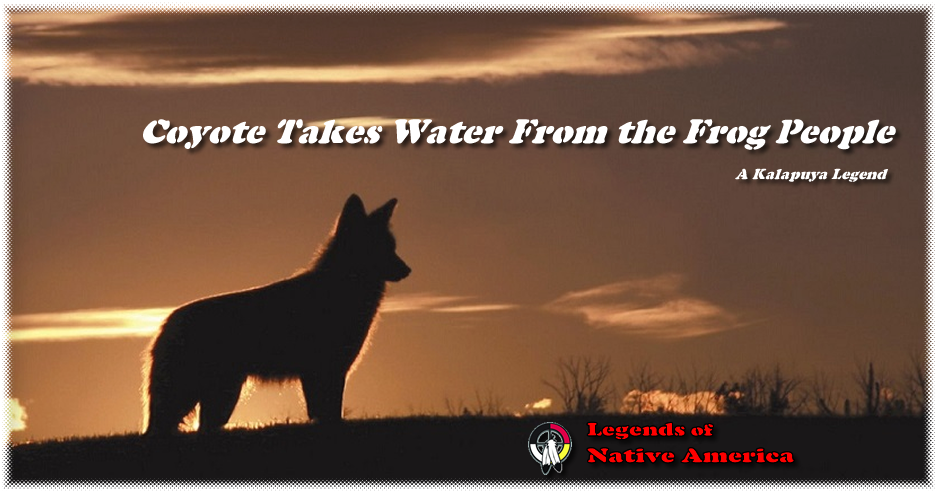 Coyote was out hunting and he found a dead deer. One of the deer's rib bones looked just like a big dentalia shell, and Coyote picked it up and took it with him. He went up to see the frog people. The frog people had all the water. When anyone wanted any water to drink or cook with or to wash, they had to go and get it from the the frog people.

Coyote came up. "Hey, frog people, I have a big dentalia shell. I want a big drink of water--I want to drink for a long time.,p>"Give us that shell," said the frog people, "and you can drink all you want."

Coyote gave them the shell and began drinking. The water was behind a large dam where Coyote drank.

"I'm going to keep my head down for a long time," said Coyote, "because I'm really thirsty. Don't worry about me."

Coyote began drinking. He drank for a long time. Finally one of the frog people said, "Hey, Coyote, you sure are drinking a lot of water there. What are you doing that for?"

Coyote brought his head up out of the water. "I'm thirsty."

After a while one of the frog people said, "Coyote, you sure a drinking a lot. Maybe you better give us another shell."

"Just let me finish this drink," said Coyote, putting his head back under water.

The frog people wondered how a person could drink so much water. They didn't like this. They thought Coyote might be doing something.

Coyote was digging out under the dam al the time he had his head under the water. When he was finished, he stood up and said, "That was a good drink. That was just what I needed."

Then the dam collapsed, and the water went out into the valley and made creeks and rivers and waterfalls.

The frog people were very angry. "You have taken all the water, Coyote!"

"it's not right that one people have all the water. Now it is where everyone can have it."

Coyote did that. Now anyone can go down to the river and get a drink of water or some water to cook with, or just swim around.