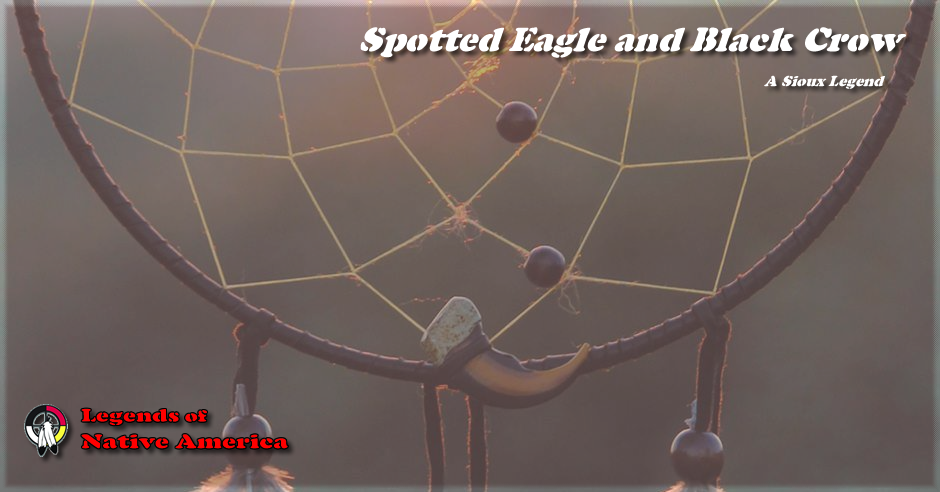 Many lifetimes ago there lived two brave warriors. One was named Wanblee Gleshka, Spotted Eagle. The other was Kangi Sapa, Black Crow. They were friends but, as it happened, were also in love with the same girl, Zintkala Luta Win--Red Bird. She was beautiful as well as accomplished in tanning and quillwork, and she liked Spotted Eagle best, which made Black Crow unhappy and jealous.

Black Crow went to his friend and said: "Let's go on a war party against the Pahani. We'll get ourselves some fine horses and earn eagle feathers."

"Good idea," said Spotted Eagle, and the two young men purified themselves in a sweat bath. They got out their war medicine and their shields, painted their faces, and did all that warriors should do before a raid. Then they rode out against the Pahani.

The raid did not go well. The Pahani were watchful, and the young warriors could not get near the herd. Not only did they fail to capture any ponies, they even lost their own mounts while they were trying to creep up to the enemy's herd. Spotted Eagle and Black Crow had a hard time escaping on foot becasue the Pahani were searching for them everywhere. At one time the two had to hide underwater in a lake and breathe through long, hollow reeds which were sticking up above the surface. But at least they were clever at hiding, and the Pahani finally gave up the hunt.

Traveling on foot made the trip home a long one. Their moccoasins were tattered, their feet bleeding. At last they came to a hight cliff. "Let's go up there," said Black Crow, "and find out whether the enemy is following us." Clambering up, they looked over the countryside and saw that no one was on their trail. But on a ledge far below them they spied a nest with two young eagles in it. "Let's get those eagles, at least," Black Crow said. There was no way to climb down the sheer rock wall, but Black Crow took his lariat, made a loop in it, put the rope around Spotted Eagle's chest, and lowered him.

When his friend was on the ledge with the nest, Black Crow siad to himself: "I can leave him there to die. When I come home alone, Red Bird will marry me." He threw his end of the rope down and went away without looking back or listening to Spotted Eagles cries.

At last it dawned on Spotted Eagle that his friend had betrayed him, that he had been left to die. The lariat was much too short to lower himself to the ground; an abyss of three hundred feet lay beneath him. he was alone with the two young eagles, who screeched angrily at the strange, two-legged creature that had invaded their home.

Black Crow returned to his village. "Spotted Eagle has died a warrior's death," he told the people. "The Pahanis killed him." There was loud wailing throughout the village, because everybody had liked Spotted Eagle. Red Bird slashed her arms with a sharp knife and cut her hair to make her sorrow plain to all. But in the end because life must go on, she became Black Crow's wife.

Spotted Eagle, however, did not die on his lonely ledge. The eagles got used to him, and the old eagles brought him plenty of food--rabbits, prairie dogs, and sage hens--which he shared with the two chicks. Maybe it was the eagle medicine in his bundle which he carried on his chest that made the eagles accept him. Still , he had a very hard time on that ledge. it was so narrow that he had to tie himself to a little rock sticking out of the cliff to keep from falling off in his sleep. In this way he spent some uncomfortable weeks; after all, he was a human being and not a bird to whom a crack in the rock face is home.

At last the young eagles were big enough to practice flying. "What will become of me now?" thought the young man. "Once the fledglings have flown the nest, the old birds won't bring any more food." Then he had a n inspiration, and told himself, "Perhaps I'll die. Very likely I will. But I won't just sit here and give up."

Spotted Eagle took his little pipe out of his medicine bundle, lifted it up to the sky and prayed: "Wakan Tanka, onshimala ye: Great Spirit, pity me. You have created man and his brother, the eagle. You have given me the eagle's name. Now I will try to let the eagles carry me to the ground. Let the eagles help me; let me succeed."

He smoked and felt a surge of confidence. Then he grabbed hold of the legs of the two young eagles. "Brothers," he told them, "you have accepted me as one of your own. Now we will live together, or die together. Hoka-hey!" and he jumped off of the ledge.

He expected to be shattered on the ground below, but with a mighty flapping of wings, the two yound eagles broke his fall and the three landed safely. Spotted Eagle said a prayer of thanks to the ones above. Then he thanked the eagles and told them that one day he would be back with gifts and have a giveaway in their honor.

Spotted Eagle returned to his village. The excitement was great. He had been dead an had come back to life. Everybody asked him how it happened that he was not dead, but he wouldn't tell them. "I escaped," he said, "that's all." He saw his love married to the treacherous friend and bore it in silence. He was not one to bring strife and enmity to his people, to set one family against another. Besides, what had happened could not be changed. Thus, he accepted his fate.

A year or so later, a great war party of the Pahani attacked his village. The enemy outnumbered the Sioux tenfold, and Spotted Eagle's band had no chance for victory. All the warriors could do was fight a slow rear-guard action to give the aged, the women, and children time to escape across the river. Guarding their people this way, the handful of Sioux fought bravely, charging the enemy again and again, forcing the Pahani to halt and regroup. Each time, the Sioux retreated a little, taking up a new position on a hill or across a gully. In this way they could save their families.

Showing the greatest courage, exposing their bodies freely, were Spotted Eagle and Black Crow. In the end they alone faced the enemy. Then, suddenly, Black Crow's horse was hit by several arrows and collapsed under him. "Brother, forgive me for what I have done," he cried to Spotted Eagle, let me jump on your horse behind you."

Black Crow answered: "I am a Fox. I shall pin my sash. I will win here or die here." He sang his death song. He fought stoutly. There was no one to release him by unpinning him and taking him upon a horse. He was hit by lances and arrows and died a warrior's death. Many Pahani died with him.

Spotted Eagle had been the only one to watch Black Crow's last fight. At last he joined his people across the river, where the Pahani did not follow them. "You husband died well," Spotted Eagle told Red Bird.

After some time had passed, Spotted Eagle married Red Bird. And much, much later told his parents and no one else, how Black Crow had betrayed him. "I forgive him now," he said, "because once, long ago, he was my friend, and because he died as a warrior should, fighting for his people, and also because Red Bird and I are happy now."

After a long winter, Spotted Eagle told his wife when spring came again: "I must go away for a few days to fulfill a promise. And I have to go alone." He rode off by himself to that cliff and stood again at its foot, below the ledge where the eagles' nest had been. He pointed his sacred pipe to the four directions, then down to Grandmother Earth and up to the Grandfather, letting the smoke ascend to the sky, calling out: "Wanblee, Mishunkala, little Eagle Brothers, hear me."

High above in the clouds appeared two black dots, circling. These were the eagles who had saved his life. They came at his call, their huge wings spread royally. Swooping down, uttering a shrill cry of joy and recognition, they alighted at his feet. He stroked them with his feather fan. thanked them many tmes, and fed them choice morsels of buffalo meat. He fastened small medicine bundles around their legs as a sign of friendship, and spread sacred tobacco offering around the foot of the cliff. Thus he made a pact of friendship and brotherhood between Wanblee Oyate--the eagle nation--and his own people. Afterwards the stately birds soared up again into the sky, circling motionless, carried by the wind, disappearing into the clouds. Spotted Eagle turned his horse's head homeward, going back to Red Bird with deep content.

This story of two warriors, of jealousy, and of eagles was first told by the great Mapiya Luta--Chief Red Cloud of the Oglalas