Legend of the White Raven Spirit 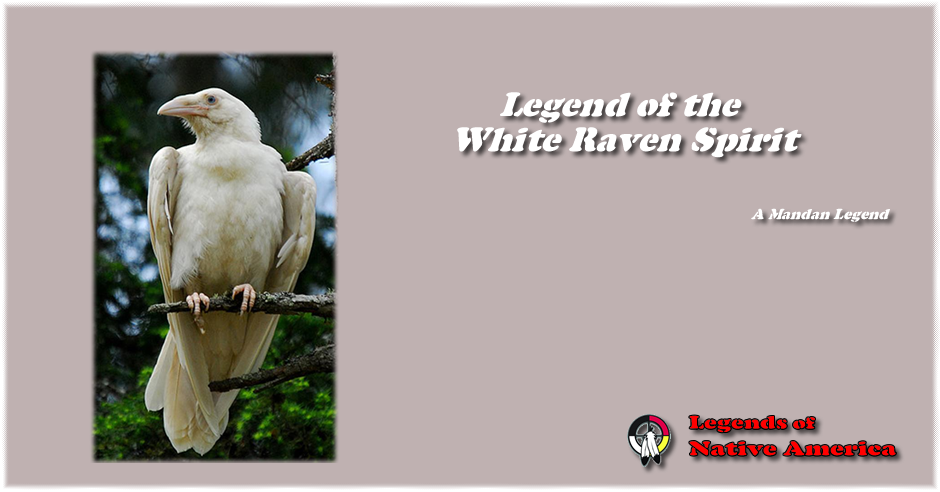 At the beginning, when the Earth was fresh and new, the Great Spirit, sent down His Raven to enjoy this new creation. As Raven soared down from cloud to cloud he began to take the color of the snow crystals that touched his wings, each crystal being different, like the creation on the earth. The Great Spirit told him, you will be like the snow flakes you have gathered on your wings, a part of everything new, everything that I have created. You will be for all people. As White Raven soared in the clouds the cool air rushed under his wings, he was singing and shouting songs of praise to his Creator.

One day he wanted to touch and feel the ground and taste the earth below. He wanted someone to keep him company, but he knew when he landed he would soil his feathers having to settle on the ground below. So the Great Spirit, wishing to please this special one, created a special spirit mate for White Raven, a White Buffalo where he could land and rest. Now there were many of these new Buffalo but only one as white as the snow. They moved about and covered many lands. White Raven found his spirit mate, the White Buffalo below and would ride on his back, resting and smelling the sweetness of earth, making many pleasant sounds in thanks for his new home. Now he could help White Buffalo and his brothers and sisters find good places to roam for food.

Every day White Raven would fly high into the air soaring around, spotting fine places of grass for his brother. When he would look down, he could see White Buffalo as bright as the mornings sun among the others earth colored ones. White Buffalo could be found easily and then led to the good eating places. He would sing to the White Buffalo, "Come here, come here, come here, the grass is good, good, good, then laugh". They would fly, and run, and play, and eat, and enjoy all that was given to them.

Then came a time when the Great Spirit put new creatures on the Earth. They were called humans and walked on two legs. The humans were the color of the earth, the place where they came from, and were very smart. They would sing and make fires to The Creator in thanks for their life and the beauty He had given them. But the human became very hungry and asked the Great Spirit what they should do. The Great Spirit pointed them to the White Raven and told them, "I gave to the White Raven the White Buffalo, so he could guide him to places where his brothers and sisters could eat the good grasses. Now I will give you any buffalo except the White one, to fill your lodges and stomachs and keep you warm so you and your families will never go hungry and never be cold. But remember without the White Buffalo it will be hard to see the others and hunt because they are like you, the color of the Earth.

The humans did what they were told, and after a hunt would first thank the Great Spirit, then the buffalo for his spirit, food and skin for warmth and protection. All things were very happy and gave thanks every day.

One morning, White Raven woke up from a good sleep on the soft back of White Buffalo, and stretched his wings. Flying high into the air looked for a nice place for his brother to eat for the day. While high above the hills he saw a different kind of human, although they looked the same he could feel their hearts were not the same as the others he had known. The new humans were thoughtless caring only for themselves and killed many animals that they could not eat or use for their families. White Raven talked to the Great Spirit asking what are these humans doing, they do not thank You or the ones whose spirit they send to You. They gather up much that they cannot take or use and it goes to waste. The Great Spirit said He was unhappy with these ones.


On that very day, one of the new humans saw the beautiful White Buffalo who was not paying attention to the ground, but looking up in the air to follow White Raven to a new area to eat and play. The new human creeped up on White Buffalo and took his life and spirit, not following the command of the Great Spirit. Then the new human did not thank The Great Spirit or the White Buffalo for this spirit, food or skin, leaving much of the body there to rot in the sun.

This made The Great Spirit very sad and angry. He began to cry from the clouds and sent sharp streaks of bright anger to the ground.. White Raven was very sad, his spirit mate had been taken from him and he had no place to stand or sleep any longer. White Buffalos brothers and sisters ran off causing a great rumbling that went to the heavens and began to shake the earth and the clouds. The Great Spirit let His tears begin to fall from the clouds showing His sorrow. White Raven cried and yelled as he circled his spirit mates lifeless body from high above.

As the days past and the tears continued, White Raven began to tire since he no longer had his place to rest. The streams began to overflow and the seas and the lakes rose to a point where there was very little dirt left. After many days, exhausted and soaked with rain, White Raven landed on a small piece of of muddy ground. The dirt splashed up on his body and wings. He tried to move about but he got more and more discolored with the mud . He began to change color to black as the mud spread all over his body, flopping around trying to get back into the air. A day or two passed and White Raven now was completely black and covered with mud. The water had risen to a point where the only piece of ground left was being covered with the rising flood. Far away White Raven saw an old man and his family floating towards him in a large canoe and he cried out "here, here, come, here, come here !"

The Elder noticed him and came over to him and picked him up.. The elder was very kind and wise, he fed him and dried him off. Now by this time the entire earth was covered with water and the tears had stopped. The Great Spirit now would mourn silently.

White Raven told the elder of his journey and what had happened to him and his friend, White Buffalo. Elder told him that The Great Spirit had spared him from the great rains to look for anything good, but there was much evil in the world and there was not much to save. The elder explained that again, along time in the future not only will there be good on the earth but evil also. When this time comes the Great Spirit will have to again cleanse the earth of this evil.

White Raven was now strong enough to fly back into the heavens. As he left the elder and his family he thanked him for his kindness and began to soar back to The Great Spirit. The Great Spirit told the elder he would He would create only black Ravens, to remind all peoples of the evil that man can create. The Great Spirit at a the time in the future when the earth is filled with evil will again send His White Raven. This time he will not turn to black or be soiled, but remain forever the color The Great Spirit had given him in the beginning. One will see White Raven and he will give this message to many Nations and to all who will listen to him and what he says about The Great Spirit. This one will be giving a warning to all, of bad times that are coming. White Raven will again have the soft white back of his spirit mate to rest on, and everyone should listen to his warning;" Return to the Great Spirit, give Him songs of praise. Burn fires that will let their smokes rise up to Him as a pleasing smell. Put away your evil ways and desires, putting The Great Spirit as the Way to follow, so He will be pleased with us."

White Raven then soared up towards the Great Spirit, into the clouds. The snow crystals began to cleanse the feathers of White Raven as he flew through the clouds going ever higher until heagain became as he was in the beginning, The Way, The Great Spirit had meant him to be.

So we must all be waiting and looking for this time that is in the future. For the return of the White Raven.

This time will come to turn to the Great Spirit again. We will still try our evil ways, destroying what He has done for us. Will we do the things that we were meant to do in the beginning. Love The Great Spirit, live in peace with all, love The Way The Great Spirit loves us, and treat everyone as He treats us. This is what is written, this is The Way it must be.