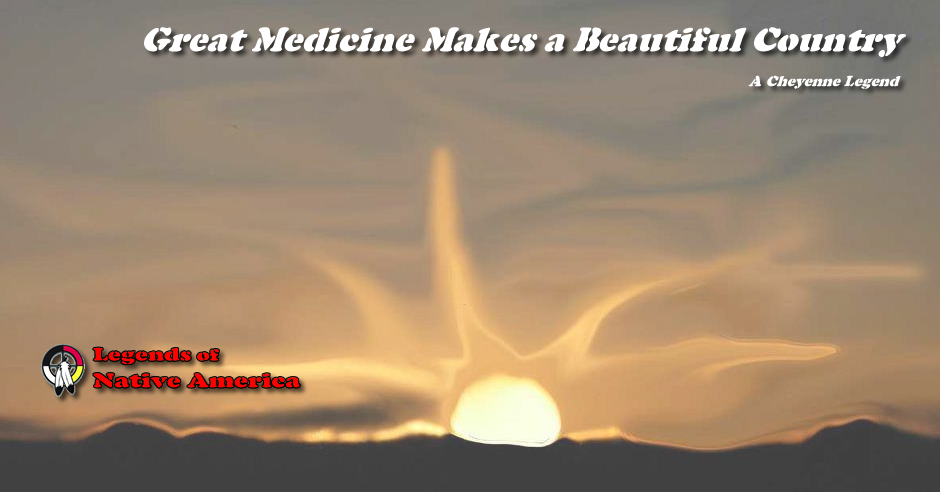 In the beginning the Great Medicine created the earth, and the waters upon the earth, and the sun, moon, and stars. Then he made a beautiful country to spring up in the far north. There were no winters, with ice and snow and bitter cold. It was always spring; wild fruits and berries grew everywhere, and great trees shaded the streams of clear water that flowed through the land. In this beautiful country the Great Medicine put animals, birds, insects, and fish of all kinds. Then he created human beings to live with the other creatures.

Every animal, big and small, every bird, big and small, every fish, and every insect could talk to the people and understand them. The people could understand each other, for they had a common language and lived in friendship. They went naked and fed on honey and wild fruits; they were never hungry. They wandered everywhere among the wild animals, and when night came and they were weary, they lay down on the cool grass and slept. During the days they talked with the other animals, for they were all friends.

The Great Spirit created three kinds of human beings: first, those who had hair all over their bodies; second, white men who had hair all over their heads and faces and on their legs; third, red men who had very long hair on their heads only. The hairy people were strong and active. The white people with the long beards were in a class with the wolf, for both were the trickiest and most cunning creatures in that beautiful world. The red people were good runners, agile and swift, whom the Great Medicine taught to catch and eat fish at a time when none of the other people knew about eating meat.

After a while the hairy people left the north country and went south, where all the land was barren. Then the red people prepared to follow the hairy people into the south. Before they left the beautiful land, however, the Great Medicine called them together. On this occasion, the first time the red people had all assembled in one place, the Great Medicine blessed them and gave them some medicine spirit to awaken their dormant minds. From that time on they seemed to possess intelligence and know what to do. The Great Medicine singled out one of the men and told him to teach his people to band together, so that they could all work and clothe their naked bodies with skins of panther and bear and deer. The Great Medicine gave them the power to hew and shape flint and other stones into any shape they wanted --- into arrow and spearheads and into cups, pots, and axes. The red people stayed together ever afterwards.

They left the beautiful country and went southward in the same direction the hairy people had taken. The hairy people remained naked, but the red people clothed themselves because the Great Medicine had told them to. When the red men arrived in the south, they found that the hairy men had scattered and made homes inside of hills and in caves high up in the mountains. They seldom saw the hairy men, for the hairy ones were afraid and went inside their caves when the red men came. The hairy people had pottery and flint tools like those of the red men, and in the caves they slept on beds made out of leaves and skins.

For some reason they decreased in numbers until they finally disappeared entirely, and today the red men cannot tell what became of them. After the red men had lived in the south for some time, the Great Medicine told them to return north, for the barren southland was going to be flooded. When they went back to that beautiful northern land, they found that some of the white-skinned, long-bearded men and some of the wild animals were gone. They were no longer able to talk to the animals, but this time they controlled all other creatures, and they taught the panther, the bear, and similar beasts to catch game for them. They increased in numbers and became tall and strong and active.

Then for a second time the red people left the beautiful land to go south. The waters had gone, grass and trees had grown, and the country had become as beautiful as the north. While they were living there, however, another flood swept over the land and scattered the red men. When the great waters at last sank and the ground was dry, the red people did not come together again. They traveled in small bands, just as they had done in the beginning before the Great Medicine told them to unite.

The flood destroyed almost everything, and they were on the point of starvation. So they started back to their original home in the north as they had done before. But when they reached the north country this time, they found the land all barren. There were no trees, no living animals, not a fish in the water. When the red people looked upon their once-beautiful home, the men cried aloud and all the women and children wept. This happened in the beginning, when the Great Medicine created us. The people returned to the south and lived as well as they could, in some years better, in others worse.

After many hundreds of years, just before the winter season came, the earth shook, and the high hills sent forth fire and smoke. During that winter there were great floods. The people had to dress in furs and live in caves, for the winter was long and cold. It destroyed all the trees, though when spring came there was a new growth. The red men suffered much and were almost famished when the Great Medicine took pity on them. He gave them corn to plant and buffalo for meat, and from that time there were no more floods and no more famines. The people continued to live in the south, and they grew and increased. There were many different bands with different languages, for the red men were never united after the second flood.

The descendants of the original Cheyenne had men among them who were magicians with supernatural wisdom. They charmed not only their own people, but also the animals that they lived on. No matter how fierce or wild the beast, it became so tame that people could go up to it and handle it. This magic knowledge was handed down from the original Cheyenne, who came from the far north. Today Bushy Head is the only one who understands that ancient ceremony, and the Cheyenne consider him equal in rank to the medicine-arrow keeper and his assistants.