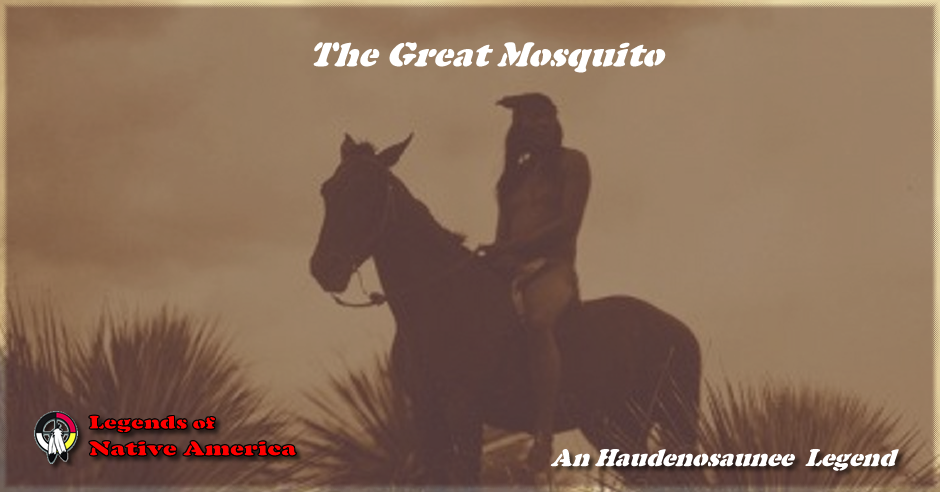 An immense bird preyed upon tiie red men in all parts of the country. Their homes were at no time safe from its ravages. Often it would carry away children playing beside the wigwams, or, like a bolt of lightning, dart from the sky and strike a woman or man bleeding and dying to the earth. Whole fields of corn had been destroyed in a single night by its ravages, and its coming was so swift and terrible that the Indians hardly dared stir from the shelter of their houses. A strong party of Cayugas and Onondagas finally determined upon its death, no matter at what cost to themselves. A young warrior offered himself for the sacrifice. He was provided with a quantity of raw-hide thongs, and repaired to one of the open spaces, where it was believed the dreaded monster would discover and descend upon him.

The young brave was to bind one of the thongs upon the bird's feet or upon some portion of its body, if possible, before he killed him, and then his companions, rushing from their place of concealment, would try to slay the enemy that had been snared with such difficulty. The preparations were elaborately made, and the young brave went forth on his dangerous mission.

Three days he sat, chanting his death-song and awaiting the coming of his terrible fate. On the morning of the fourth day the sky was suddenly darkened and the watchers saw that the great bird was slowly circling above the heroic young Cayuga. He ceased his chanting, and, standing upright, shouted defiance to the almost certain death that awaited him.

With a scream that turned the hearts of the waiting Indians cold with terror, the bird dropped upon its victim like a panther on his prey. A short and terrible struggle took place and then the concealed warriors rushed forth to finish the work of their brave young companion, who had succeeded in throwing one of the thongs over the great mosquito's neck. They brought willing and ready hands to the battle, and the arrows poured upon the struggling mass like a storm of hail. After a long encounter the bird was killed, and the young Cayuga smiled in triumph as his last glance rested upon the dead body of the monster.

Runners were at once dispatched to the villages to inform the Indians of the victory, and soon vast numbers of them came to look upon their longdreaded enemy that had been slain at such cost. Its body was larger than that of the largest bear they had ever seen, and the breadth of its outstretched wings was as great as the height of three men. Its talons were as long as arrows, and its monstrous beak was lined with sharp teeth. There was much rejoicing over the great mosquito's death, and for several days feasting and dancing were held in honor of the bravery of those who had rid the country of such a terrible scourge. Soon, however, swarms of the poisonous little flies that have been the pests of all nations since that time, infested the woods, and the Indians discovered that they came from the body of the dead bird. Too late they realized that the body of the great mosquito should have been burned when it was first slain, for fire is ever the destroyer of evil spirits.