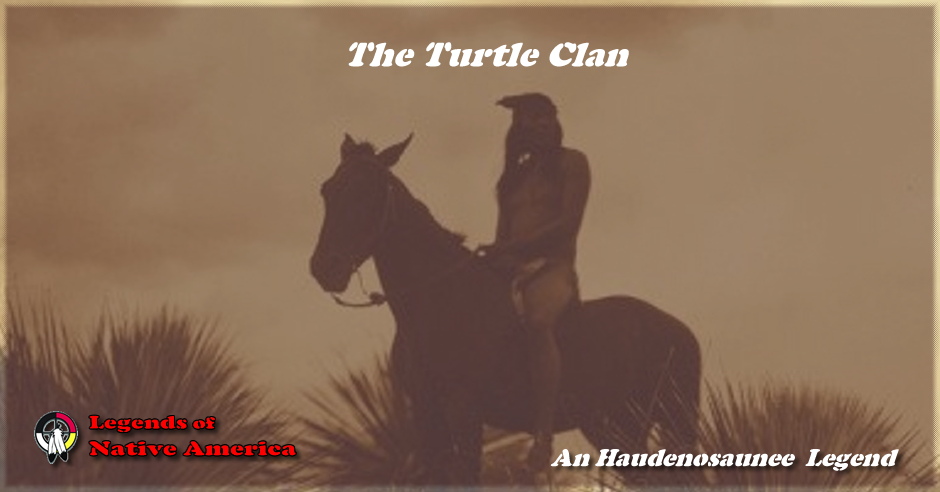 Then the Great Spirit created the turtles he gave them a vast lake in and about which they could reside, and where they would never be molested by either animals or people. But the turtles were not satisfied with the shape of the lake, and found fault with the hard, gravelly bottom and clear water. So they set to work to bring all the mud they could find on the plains surrounding it, and spread the loads of loose soil over the bottom of the lake where they were accustomed to lie. So many of them carried on the work that the lake was finally filled with the mud, and became so shallow that during one particularly hot summer it was entirely dry. Then the turtles held council and decided that the only way left to them was to set out to find a place where there was good water. One, a particularly wise and intelligent old fellow, urged his brethren to decide first upon some fixed course to follow and then by all means to remain together. Said he: "If we do this we will not only know exactly where we are going, but we can help each other.

There are a great many of us, and if any foe attacks us we can together repel the attack, for with our stone backs and sharp jaws we are well equipped for battle. Let me tell you, my brothers, that the world is full of dangers, and unless we are banded together and stand by each other, we will be scattered and lose our standing as a nation."

To this wise counsel the turtles apparently agreed, but each one wanted the honor of presenting the plan that was to be followed, and each also wanted the distinction of being chosen to lead his fellows. The wise old turtle made every effort at conciliation and proposed several plans, any one of which if accepted would have made the turtles a great and powerful nation, but they could come to no agreement. At last the commotion became so great that the voice of the wise turtle was drowned in the clamor, and he was powerless to counsel his fellows any further. Finally each turtle started off by himself, bound to follow his own inclinations, as the turtles have done ever since. At this foolish course the wise turtle became very angry. * ' Fools I " he cried, " I am ashamed to be counted as one of the turtle race, and although in memory of the forefathers whom 1 honor, I will always bear on my breast the form of a turtle, henceforth I will not be a turtle."

With a tremendous effort he threw the shell from his back and leaped forth, a fully armed and painted warrior. The turtles were terribly frightened and made off as fast as they could. From that day they have been wanderers.

The wise turtle became the progenitor of the turtle clan. He taught his children to deliberate carefully upon all matters of importance; to give attention and careful consideration to the counsels of their elders; and to work in unity in whatever they undertook.