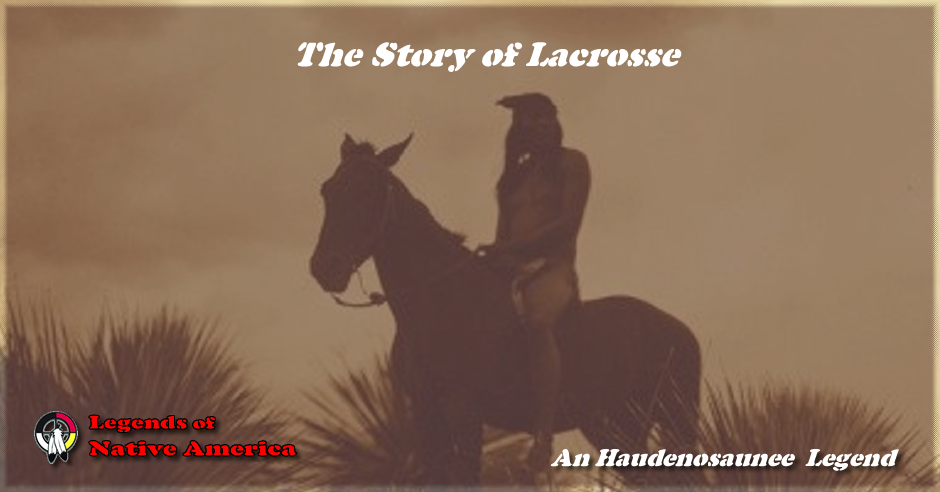 Lacrosse was a gift to us from the Creator, to be played for his enjoyment and as a medicine game for healing the people. The Haudenosaunee people know that all creatures, no matter how big or small, are significant and have a contribution to make to the overall cycle of life. Long ago our we were told the following story about a great ball game that took place between the four-legged animals and the winged birds…

The captains for the four-legged animals were: The Bear – whose weight overpowers all opposition, The Deer – whose speed and agility to stop and go made him invaluable to the team, and The Great Turtle – who could withstand the most powerful blows and still be able to advance towards the opposition.

The captains for the winged birds were: The Owl – who excelled in the ability to keep his eye on the ball, no matter what position or direction the ball may be traveling. The Hawk and Eagle – both excell in quick, swift movements. These three represented all the winged animals.

While the birds were preparing for the game, they noticed two small creatures, hardly larger than a feather, climbing up a tree where the winged leaders were perched. Upon reaching the top, they humbly asked the captains to be allowed to join the lacrosse game.

The Eagle, easily noticing that they were a squirrel and a mouse, inquired as to why they didn’t ask to join the animal team. The little creatures explained that they had asked, but had been laughed at and rejected because of their small size.

On hearing their story, the bird captains took pity on them, but wondered how they could join the birds’ teams if they had no wings. After some discussion, it was decided to that they would try to make wings for the little fellows, but how would they to do it?

By happy inspiration, one bird thought of the water drum that is used in social and ceremonial gatherings. Perhaps a piece of the drums leather could be taken from the drumhead, cut and shaped and attached to the legs of one of the small creatures. It was done and thus originated the bat.

The ball was now tossed into the air, the bat was told to catch it. With his skill in dodging and circling he kept the ball constantly in motion never allowing it to hit the ground. Through his impressive performance he convinced the birds that they had gained a valuable ally.

The birds thought they could do the same for the squirrel, but, to their dismay, all the leather had been used on the making of the bat’s wings. There was no time to send for more. At the last minute it was suggested that perhaps stretching the skin of the squirrel itself could make suitable wings. So, by tugging and pulling the fur between the front and hind feet, the task was completed and there originated the flying squirrel. When all was ready, they began the game.

Eagle and Bear met, a face-off ensued and the flying squirrel caught the ball, cradled it up the tree and passed it off the Hawk. Hawk kept it in the air for some time. Then, just as the ball was to hit the ground, the Eagle seized it. Eagle, dodging and doubling, maintained possession and kept the ball from even the Deer, the opposition… the fastest of the four-legged team. Eagle then faked to Squirrel and passed to Bat, who moved in hard and left to score the goal. This goal won the victory for the birds.

Our grandfathers tell us that when lacrosse originated it was played for healing and the enjoyment of our creator. Regardless of how unworthy you may feel an individual is, that person may have the qualities that could be a great help to you some day.

Before each game, players are reminded of the reason for their participation. Lacrosse is played for the enjoyment of OUR CREATOR. Lacrosse should not be played for money, fame, or personal gain; you should be humble and of a good mind when you take your lacrosse stick in hand.

Some players will ask the spirit of an animal for guidance so that he may have the eyes of the Hawk, and the agility of the Deer. There is often a blessing where sacred tobacco is placed into the fire so that the smoke will rise, carrying this message to the land of the creator…

Today, when the Haudenosaunee see their young men play, it makes all who are in attendance feel proud to be the originators of such a great game. Each spring marks the beginning of not only the warmer seasons, but also the start of Lacrosse in our communities.