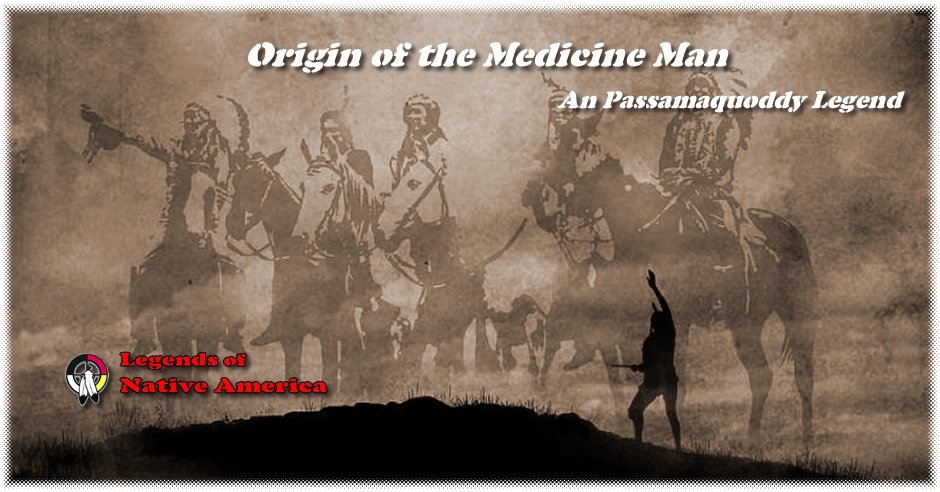 The Medicine Man is Glooscap, the Good-Spirit. Legend has it that the father of Glooscap is a being who lives under a great waterfall beneath the earth. His face is half-red, and he has a single all- seeing eye. He can give to anyone coming to him the medicine he desires. Glooscap is still busy sharpening his arrows off in a distant place, preparing sometime to return to earth and make war.

Passamaquoddies tell all of their old stories as truth. But of other stories, they speak of them as "what they hear," or hearsay.

This is a legend of long, long ago about a Passamaquoddy Indian woman who travelled constantly back and forth and through the woods. From every bush she came to, she bit off a twig, and from one of these she became pregnant. Bigger and bigger she grew, until at last she could not travel, but she built a wigwam near the mouth of a fresh-running stream.

In the night, the woman gave birth to a child. She thought at first that she should kill the child. Finally, she decided to make a bark canoe in which she placed her child. She set it adrift and let it float down the stream. Though the water was rough in places, the child was not harmed, or even wet.

The canoe floated to an Indian village, where it became stranded on the sandy shore near a group of wigwams. One of the women found the baby and brought it to her home. Every morning thereafter, it seemed that a baby of the village died. The villagers did not know what was the matter with their babies.

A neighbour noticed how the rescued child toddled off to the river every night and returned shortly after. She wondered if this could have anything to do with the death of so many babies. Then she saw the child return to its wigwam with a small tongue, roast it, and eat it. Then it lay down to sleep all night.

On the next morning, a report circulated that another child had died. Then the Indian woman was certain she knew who the killer was. She alerted the parents of the dead child and found that the child's tongue had been removed, and the child had bled to death.

Tribal deliberations were held to decide what should be done with the murderer. Some said, cut up the person and throw him into the river. Others said, burn the fragments; this they did after much consultation. They burned the fragments of the wayward child, until nothing but its ashes remained.

Naturally, everyone understood the child was dead. But that night it came back to camp again with a small tongue, which it roasted and ate. The next morning another child was found to have died in the night. The weird child was found sleeping in its usual place, just as before its cremation. He said to everyone that he would never kill any more children, and that now he had become a big boy, in fact.

The big boy announced he would take one of his bones out of his side. This he started to do, and all of his bones spilled out of his body at the same time. He closed his eyes by drawing his fingers over his eyelids, hiding his eyes. He could not move without bones and he began to grow very fat.

He surprised the Passamaquoddies by becoming a great Medicine Man. Anything they desired within reason, he granted. Later, however, his tribe moved away from their old camp. Before they left, they built a fine wigwam for the Medicine Man. So accustomed had they become to call upon his powers that they still returned to make their requests. His tribal members asked him for medicine of all kinds. When he granted their wishes, he asked them, "Turn me over and you will find your medicine beneath me."

A young man came and wished to have the love of a woman, so he asked for a love potion. The Medicine Man said, "Turn me over." The young man turned over the conjurer and found an herb. "You must not give this away or throw it away," said the old man. The young Passamaquoddy went back to his own wigwam.

Soon he was aware that all the young women followed him in the camp, at all times. In fact, he longed to be alone for a change. He did not like to be chased by the women. At last when he became too troubled by the tribal women, he returned to the Medicine Man and gave back the herbal love portion. The young Passamaquoddy left without it. Another young man went to the conjurer for help. The Medicine Man asked, "What is it you want?" This man said, "I want to live as long as the world shall stand."

"Your request is a hard one to consider, but I will do my best to answer it," replied the Medicine Man. "Now turn me over," and underneath his body was an herb. He said, "Go to a place that is bare of everything, so bare it is destitute of all vegetation, and just stand there." The Medicine Man pointed out this direction for the young man.

The young man went according to the Medicine Man's instructions, but looking back at the conjurer, the standing man saw branches and twigs sprouting all over his own body. He had been changed into a cedar tree, to stand there forever--useless to everyone.