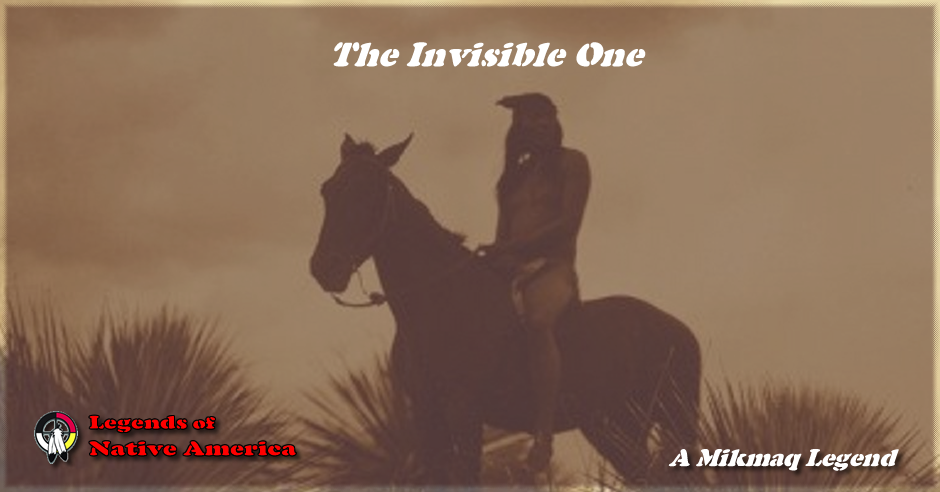 There was once a large Indian village situated on the border of a lake, --Nameskeek' oodun Kuspemku. At the end of the place was a lodge, in which dwelt a being who was always invisible. He had a sister who attended to his wants, and it was known that any girl who could see him might marry him. Therefore there were indeed few who did not make the trial, but it was long ere one succeeded.

And it passed in this wise. Towards evening, when the Invisible One was supposed to be returning home, his sister would walk with any girls who came down to the shore of the lake. She indeed could see her brother, since to her he was always visible, and beholding him she would say to her companions, "Do you see my brother?" And they would mostly answer, "Yes," though some said, "Nay," -- alt telovejich, aa alttelooejik. And then the sister would say, "Cogoowa' wiskobooksich?" "Of what is his shoulder-strap made?" But as some tell the take, she would inquire other things, such as, "What is his moose-runner's haul?" or, "With what does he draw his sled?" And they would reply, "A strip of rawhide," or "A green withe," or something of the kind. And then she, knowing they had not told the truth, would reply quietly, "Very well, let us return to the wigwam!"

As they entered the place she would bid them not to take a certain seat, for it was his. After they had helped to cook the supper they would wait with great curiosity to see him eat. Truly he gave proff that he was a real person, for as he took off his moccasins they became visible, and his sister hung them up; but beyond this they beheld nothing not even when they remained all night, as many did.

There dwelt in the village an old man, a widower, with three daughters. The youngest of these was very small, weak, and often ill, which did not prevent her sisters, especially the eldest, treating her with great cruelty. The second daughter was kinder , ans sometimes took the part of the poor abused little girl, but the other would burn her hands and face with hot coals; yes, her whole body was scarred with marks made by torture, so that people called her OOchigeaskw (the rough-faced girl). And when her father, coming home, asked what it meant that the child was so disfigured, her sister would promptly say that it was the fault of the girl herself, for that, having been forbidden to go near the fire, she had disobeyed and fallen in.

Now it came to pass that it entered the heads of the the two elder sisters of this poor girl that they would go and try their fortune at seeing the Invisible One. So they clad themselves in their finest and strove to look their fairest; and finding his sister at home when with her to the wonted walk down to the water. Then when He came, being asked if they saw him, they said, "Certainly," and also replied to the question of the shoulder-strap or sled cord, "A piece of rawhide." In saying which, they lied, like the rest, for they had seen nothing, and got nothing for their pains.

When their father returned home the next evening, he brought with him many of the pretty little shells from which weiopeskool, or wampum, was made, and they were soon engaged napawejik (stringing them).

That day poor little OOchigeaskw', the burnt-faced gir, who had always run barefoot, got a pair of her father's old moccasins, and put them into water that they might become flexible to wear. And begging her sissters for a few wampum shells, the eldest did but call her "a lying little pest," but the other gave her a few. And having no clothes beyond a few pawltry rags, the poor creature went forth and got herself from the woods a few sheets of birch bark, of which she made a dress, putting some figures on the bark. And this dress she shaped like those worn of old. So she made a petticoat and a loose gown, a cap, leggins, and handkerchief, and, having put on her father's great old moccasins,--whcih came nearly up to her knees,--she went forth to try her luck. For even this little thing would see the Invisible One in the great wigwam at the end of the village.

Truly her luck had a most auspicious beginning, for there was one long storm of ridicule and hisses, yells and hoots, from her own door to that of which she went ot seek. Her sisters tried to shame her, and bade her to stay home, but she would not obey; and all the idlers, seeing this strange little creature in her odd array, cried, "Shame!" But she went on, for she was greatly resolved; it may be that some spirit inspired her.

Now this poor small wretch in her mad attire, with her hair singed off and her little face as full of burns and scars as there are holes in a sieve, was, for all this, mostly kindly received by the sister of the Invisible One; for this noble girl knew more than the mere outside of thins as the world knows them. And as the brown of the evening sky became black, she took her down to the lake. And erelong the girls knew that He had come. Then the sister said, "Do you see him?" And the other replied in awe, "Truly I do, --and He is wonderful." "And what is his sled string?" "It is," she replied, "the Rainbow." And great fear was on her. "But, my sister," said the other, "what is his bow-string?" "His bow-string is Ketaksoowowcht: (the Spirit's Road, the Milky Way).

"Thou hast seen him, said the sister. And, taking the girl home, she bathed her, and as she washed all the scars disappeared from face and body. Her hair grew again; it was very long, and like a blackbird's wing. Her eyes were like stars. In all the world was no such beauty. Then from her treasures she gave her a wedding garment, and adorned her. Under the comb, as she combed her, her hair grew. It was a great marvel to behold.

Then, having done this, she bade her take the wife's seat in the wigwam,--that by which her brother sat, the seat next the door. And when He entered, terrible and beautiful, he smiled and said, "Wajoolkoos!" "So we are found out!" "Alajulaa." "Yes," was her reply. So she became his wife.

"Legends & Lore of the American Indians" Edited by Terri Hardin