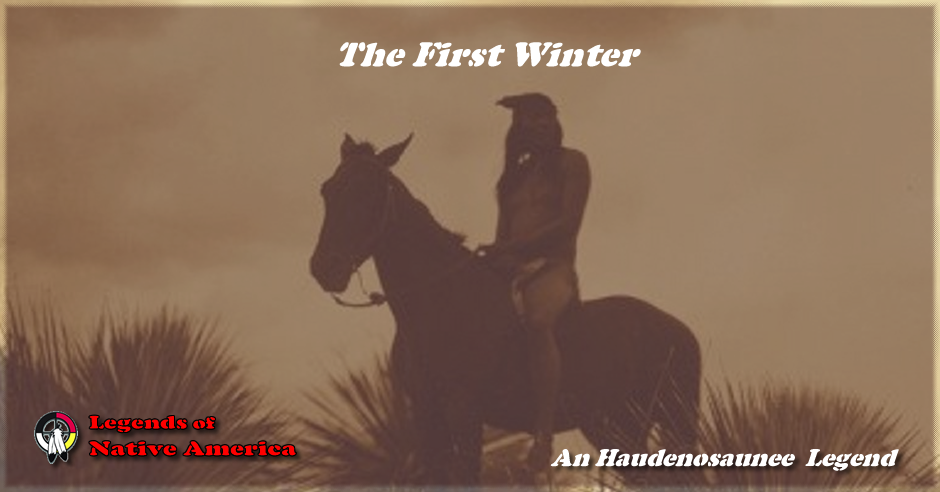 There was a time when the days were always of the same length, and it was always summer. The red men lived continually in the smile of the Great Spirit, and they were happy. But there arose a chief who was so powerful that he at last declared himself mightier than the Great Spirit, and taught his brothers to go forth to the plains and mock the Great Spirit. They would call upon the Great Spirit to come and fight with them, or would challenge him to take away the crop of growing corn, or drive the game from the woods ; they would say he was an unkind father to keep to himself and their dead brothers the Happy Hunting-Grounds, where the red men could hunt forever without weariness. They laughed at their old men, who had feared for so many moons to reproach the Great Spirit for his unfair treatment of the Indians, who were compelled to hunt and fish for game for their wives and children, while their women had to plant the corn and harvest it. "In the Happy Hunting-Grounds, " they said, " the Great Spirit feeds our brothers and their wives and does not let any foes or dangers come upon them, but here he lets us go hungry many times. If he is as great as you have said, why does he not take care of his children here ?"

Then the Great Spirit told them he would turn his smiling face away from them, so that they should have no more light and warmth, and must build fires in the forests if they would see.

But the red men laughed and taunted him, telling him that he had followed one trail so long that he could not get out of it, but would have to come every day and give them light and heat. Then they would dance and make faces at him and taunt him with his helplessness.

In a few days the quick eyes of some of the red men saw in the morning the face of the Great Spirit appear where it was not wont to appear, but they were silent, fearing the jibes of their brothers. Finally duller eyes noticed the change, and alarm and consternation spread among the people. Each day brought less and less of the Great Spirit's smile and his countenance was often hidden by dark clouds, while terrible storms beat upon the frightened faces turned in appeal toward the heavens. The strong braves and warriors became as women ; the old men covered their heads with skins and starved in the forests; while the women in their lodges crooned the low, mournful wail of the death-song, and the papooses crawled among the caves in the rocks and mountains and died unheeded. Frosts and snows came upon an unsheltered and stricken race, and many of them perished.

Then the Great Spirit, who had almost removed his face from the sight of the red men, had pity, and told them he would come back. Day after day the few that remained alive watched with joy the return of the sun. They sang in praise of the approaching summer, and once more hailed with thankfulness the first blades of growing corn as it burst from the ground. The Great Spirit told ^his children that every year, as a punishment for the insults they had given their Father, they should feel for a season the might of the power they had mocked; and they murmured not, but bowed their heads in meekness.

From the bodies of those who had perished of cold and hunger sprang all manner of poisonous plants, which spread themselves over the earth to vex and endanger the lives of the Indians of all generations; and in after years when any of the Indians from any reason "ate of the fatal root," it was said of them that they had * * eaten of the bodies of their brothers who had defied the Great Spirit."