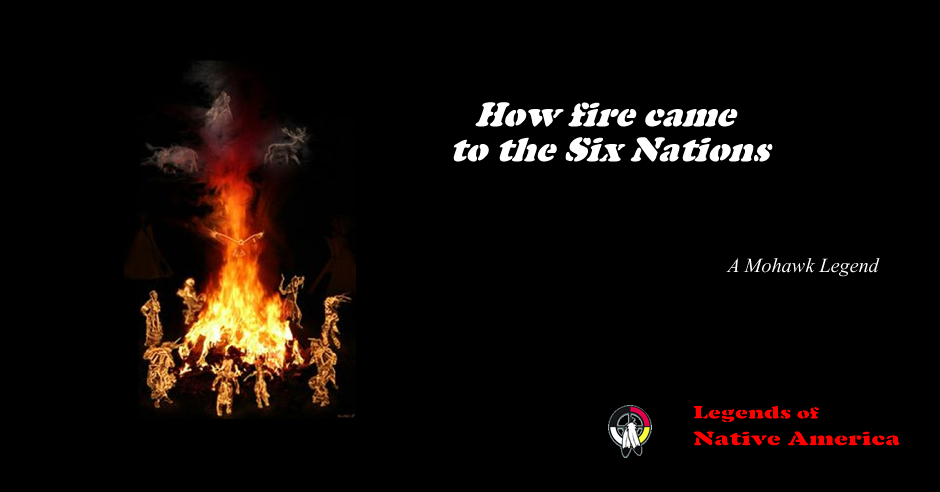 Often, around the fire in the long house of the Iroquois, during the Moon of the Long Nights, this tale is told.

Three Arrows was a boy of the Mohawk tribe. Although he had not yet seen fourteen winters he was already known among the Iroquois for his skill and daring. His arrows sped true to their mark. His name was given him when with three bone-tipped arrows he brought down three flying wild geese from the same flock.

He could travel in the forest as softly as the south wind and he was a skilful hunter, but he never killed a bird or animal unless his clan needed food. He was well-versed in woodcraft, fleet of foot, and a clever wrestler. His people said, 'Soon he will be a chief like his father.'

The sun shone strong in the heart of Three Arrows, because soon he would have to meet the test of strength and endurance through which the boys of his clan attained manhood. He had no fear of the outcome of the dream fast which was so soon to take.

His father was a great chief and a good man, and the boy's life had been patterned after that of his father. When the grass was knee-high, Three Arrows left his village with his father.

They climbed to a sacred place in the mountains. They found a narrow cave at the back of a little plateau. Here Three Arrows decided to live for his few days of prayer and vigil. He was not permitted to eat anything during the days and nights of his dream fast.

He had no weapons, and his only clothing was a breechclout and moccasins. His father left the boy with the promise that he would visit him each day that the ceremony lasted, at dawn. Three Arrows prayed to the Great Spirit. He begged that soon his clan spirit would appear in a dream and tell him what his guardian animal or bird was to be. When he knew this, he would adopt that bird or animal as his special guardian for the rest of his life.

When the dream came he would be free to return to his people, his dream fast successfully achieved. For five suns Three Arrows spent his days and nights on the rocky plateau, only climbing down to the little spring for water after each sunset. His heart was filled with a dark cloud because that morning his father had sadly warned him that the next day, the sixth sun, he must return to his village even if no dream had come to him in the night.

This meant returning to his people in disgrace without the chance of taking another dream fast. That night Tree Arrows, weak from hunger and weary from ceaseless watch, cried out to the Great Mystery. 'O Great Spirit, have pity on him who stands humbly before Thee. Let his clan spirit or a sign from beyond the thunderbird come to him before tomorrow's sunrise, if it be Thy will.'

As he prayed, the wind suddenly veered from east to north. This cheered Three Arrows because the wind was now the wind of the great bear, and the bear was the totem of his clan. When he entered the cavern he smelled for the first time the unmistakable odor of a bear: this was strong medicine.

He crouched at the opening of the cave, too excited to lie down although his tired body craved rest. As he gazed out into the night he heard the rumble of thunder, saw the lightning flash, and felt the fierce breath of the wind from the north.

Suddenly a vision came to him, and a gigantic bear stood beside him in the cave. Then Three Arrows heard it say, 'Listen well, Mohawk. Your clan spirit has heard your prayer. Tonight you will learn a great mystery which will bring help and gladness to all your people.'

A terrible clash of thunder brought the dazed boy to his feet as the bear disappeared. He looked from the cave just as a streak of lightning flashed across the sky in the form of a blazing arrow. Was this the sign from the thunderbird ? Suddenly the air was filled with a fearful sound. A shrill shrieking came from the ledge just above the cave. It sounded as though mountain lions fought in the storm; yet Three Arrows felt no fear as he climbed toward the ledge.

As his keen eyes grew accustomed to the dim light he saw that the force of the wind was causing two young balsam trees to rub violently against each other. The strange noise was caused by friction, and as he listened and watched fear filled his heart, for, from where the two trees rubbed together a flash of lightning show smoke. Fascinated, he watched until flickers of flames followed the smoke.He had never seen fire of any kind at close range nor had any of his people. He scrambled down to the cave and covered his eyes in dread of this strange magic. Then he smelt bear again and he thought of his vision, his clan spirit, the bear, and its message. This was the mystery which he was to reveal to his people. The blazing arrow in the sky was to be his totem, and his new name - Blazing Arrow.

At daybreak, Blazing Arrow climbed onto the ledge and broke two dried sticks from what remained of one of the balsams. He rubbed them violently together, but nothing happened. 'The magic is too powerful for me,' he thought. Then a picture of his clan and village formed in his mind, and he patiently rubbed the hot sticks together again.

His will power took the place of his tired muscles. Soon a little wisp of smoke greeted his renewed efforts, then came a bright spark on one of the sticks. Blazing Arrow waved it as he had seen the fiery arrow wave in the night sky. A resinous blister on the stick glowed, then flamed - fire had come to the Six Nations!