The Creation Story (The beginning) 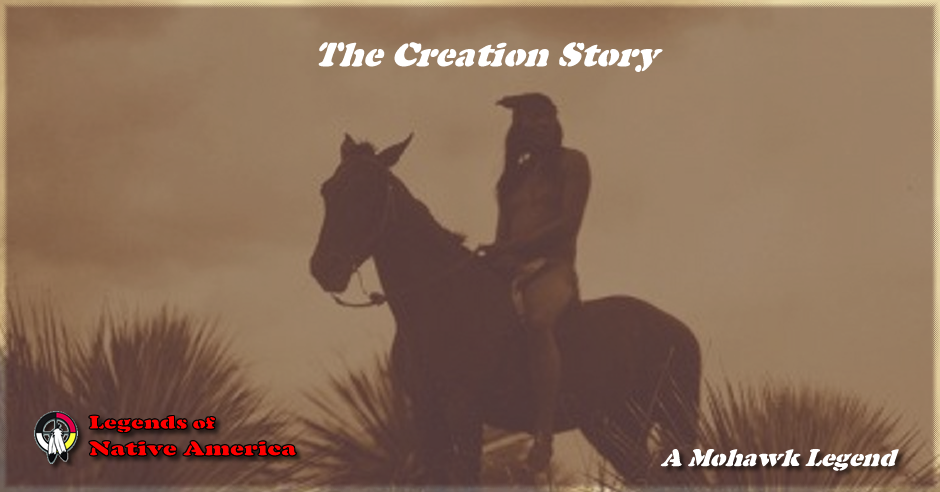 It is said that in the regions above the world where we live, there were beings who did not know what it was to cry, feel pain, or die. They lived in lodges with their families, in a clearing in the forest. There was one house where a man and woman being lived: the man was called tehnino:taton, meaning he had special powers, and had to be protected from others while he was growing up.

The man being became sick although no one in the Sky World knew what it was to be sick. As time passed he became more weak and soon died. He was placed in a burial case and placed near the ceiling of his house.

Soon the woman being appeared to be pregnant. The people of the village repeatedly asked her who the father of the baby was, but she did not answer. One day she gave birth to a female being named Aientsik which means Fertile Earth.

The child-being was healthy and grew very fast. One day though, she began to cry. Nothing the people of the village did would make her stop. The mother placed her in front of the burial case, and she stopped crying. After a long time she felt better, and came back to the rest of the village.

This happened many times. The people of the village could sometimes hear her talking, but they did not know who she was talking to. One day she came back from visiting her father, and told her mother that she was to be married. Her mother made bread of corn softened by boiling, and mixed berries in with it. When she was finished, she put it into a basket for Aientsik.

The next day the young woman set out for the village of Tharonhiawakon, or He Who Holds Up the Sky. This is the place where her father told her to go. Everything on the way was just as her father had told her.

The young woman offered this man the corn and berry bread, and he accepted. She stayed there for three nights. During this time the man began to feel sick. He had a dream that made him feel uncomfortable. He gathered the people of his village to find the meaning of the dream.

The next day the man brought Aientsik to the Tree of the Standing Light. He asked her to uproot the tree, saying that he would feel better once the tree was lifted. She did as he asked. He then told her to look into the hole. As she leaned forward to see what was below that tree, the man pushed her into the hole. Surprised, she grabbed for help and took the roots of the strawberry, corn and tobacco with her as she fell.

She fell in darkness for some time, but soon she could see water below her with animals in it. The Loon looked up to see this woman falling, and asked the Turtle if she could land on his back. Turtle agreed. The geese and ducks flew up to meet her and carry her safely on their backs to meet the others. It is because the animals first saw her when she was falling from the sky, that she is often referred to as Skywoman.

Three animals tried to bring up dirt from the bottom of the great waters. The first two failed. The muskrat took a deep breath and was gone for a long time, but he came up with dirt clenched in his tiny paws. He placed the mud on the back of the Turtle.

Every day Aientsik walked around the edge of the Turtle, noticing that every time she completed walking in a circle, the dirt had grown and the land was becoming larger. Soon plants were beginning to grow from the roots she had grabbed when she had fallen into this world. Every day when she returned to her resting place there was a fire and corn or beans and squash for her to eat. Corn, beans and squash have been known ever since as the three sisters, providers for the Kanienkeha (Mohawk) people.