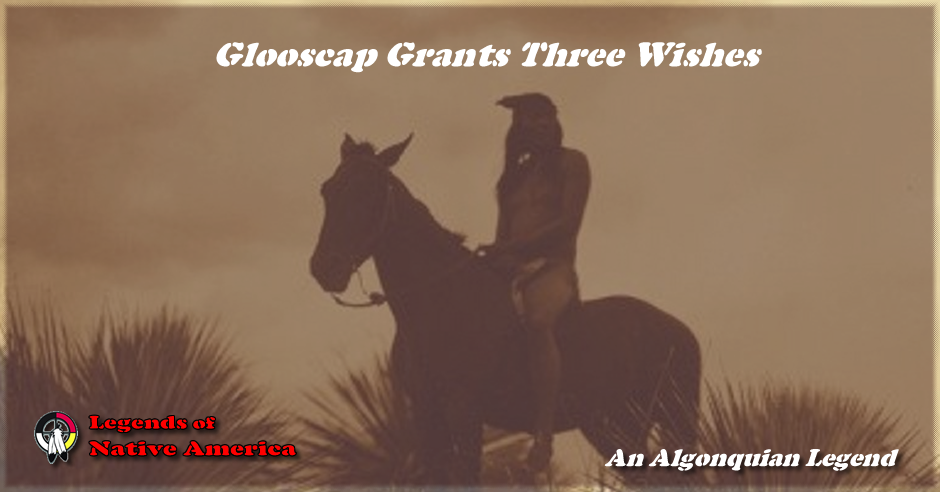 Even the great Glooscap can behave like a trickster, especially shen people ask him for the frivolous. When men had heard that Glooscap, the lord of men and beasts, would grant a wish to anyone who could come to him, three Indians resolved to attempt the journey.

One was a Maliseet from St. John, and the other two were Penobscots from Old Town. The path was long and the way hard, and they suffered much during the seven years that it took them. But while they were still three months' journey from his home, they heard the barking of his dogs, and as they drew nearer day by day, the noise was louder. And so after great trials, they foundhim, and he made them welcome and entertained them.

Before they went, he asked them what they wanted. And the eldest, an honest, simple man with no standing at home because he was a bad hunter, said he wanted to be a master at catching and killing game. Then Glooscap gave him a flute, or magic pipe, which pleases every ear and has the power of persuading every animal to follow him who plays it. The man thanked the lord and left.

The second Indian, on being asked what he would have, replied, "the love of many women." And when Glooscap asked how many, he said, "I don't care how many, just so there are enough and more than enough." The god seemed displeased to hear but, smiling, gave the man a bag which was tightly tied and told him not to open it until he reached home. So the second Indian thanked the lord and left.

The third Indian was a gay and handsome but foolish young fellow whose whole heart was set on making people laugh. When asked what he chiefly wanted, he said he would like to be able to make a certain quaint and marvelous sound, like breaking wind or belching, which was frequently heard in those primitive times among all the Wabanaki. The effect of this noise is such that they who hear it always burst out laughing. And to him Glooscap was also affable, secruig from the woods a certain magic root which, when eaten, would create the miracle the young man sought. But Glooscap warned him not to touch the root until he got home. Elated, the man thanked the lord and left.

It had taken the three Indians seven years to get there, but seven days were all they needed to return home. Yet only one of the men ever saw his lodge again. This was the hunter, who trudged through the woods with his pipe in his pocket and peace in his heart, happy to know that as long as lived he would always have venison in his larder.

But the man who loved women, yet had never even won a wife, was anxious to know whether Glooscap's magic would work. He hadn't gone very far into the woods before he opened the bag. And there flew out by the hundreds, lie white doves swarming about him, beautiful girls with black burning eyes and flowing hair. Wild with passion, they threw their arms around him and kissed him as he responded to their embraces. But they crowded thicker and thicker, wilder and more passionate. He asked them to give him air, but they would not, and he tried to escape, but he could not; and so, panting, crying for breath, he smothered. And those who came that way found him dead, but what became of the girls no man knows.

Now, the third Indian went merrily along the path when all at once it flashed on his mind that Glooscap had given him a present. And without the least though of Glooscap's warning, he drew out the root and ate it. Scarcely had he done this before he realized that the had the power of uttering the weird and mystic sound to perfection. It rang over the hills and woke the distant echoes until it was answered by a solemn owl, and the young man felt that it was indeed wonderful. So he walked on gayly, trumpeting as he went, happy as a bird.

But by and by he began to feel weary of his performance. Seeing a deer, he drew an arrow, stole closer, and was just about to shoot when in spite of himselft the wild, unearthly sound broke forth like a demon's warble. The deer bound away, and the young man was cursed. By the time he reached Old Town half dead with hunger, he was not much to laugh over, though at first the Indians did chuckle, which cheered him up a little. But as the days went on they wearied of his joke and began to avoid him. His unpopularity made him feel that his life was a burden, and he went into the woods and killed himself.