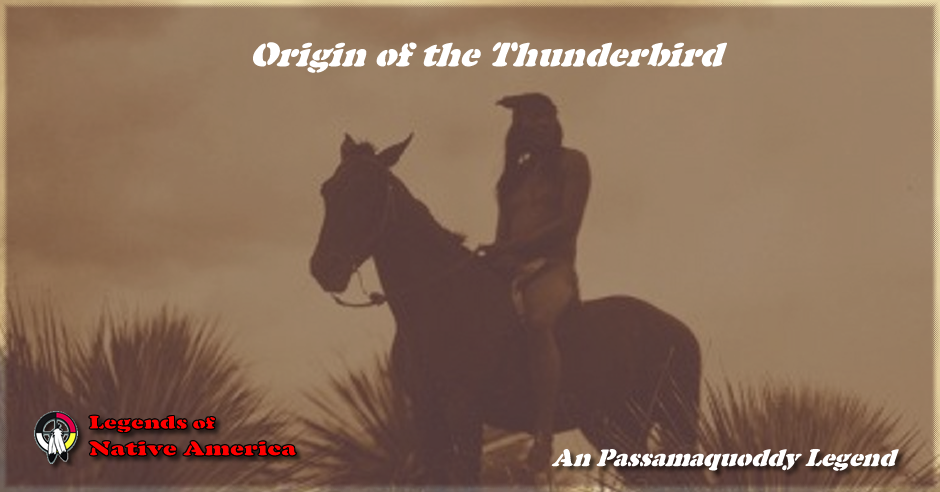 This is a legend of long, long ago times. Two Indians desired to find the origin of thunder. They travelled north and came to a high mountain. These mountains performed magically. They drew apart, back and forth, then closed together very quickly.

On the other side, the first Indian saw a large plain with a group of wigwams, and a number of Indians playing a ball game. After a little while, these players said to each other, "It is time to go." They disappeared into their wigwams to put on wings, and came out with their bows and arrows and flew away over the mountains to the south. This was how the Passamaquoddy Indian discovered the homes of the thunderbirds.

The remaining old men of that tribe asked the Passamaquoddy Indian, "What do you want? Who are you?" He replied with the story of his mission. The old men deliberated how they could help him.

They decided to put the lone Indian into a large mortar, and they pounded him until all of his bones were broken. They moulded him into a new body with wings like thunderbird, and gave him a bow and some arrows and sent him away in flight. They warned him not to fly close to trees, as he would fly so fast he could not stop in time to avoid them, and he would be killed.

The lone Indian could not reach his home because the huge enemy bird, Wochowsen, at that time made such a damaging wind. Thunderbird is an Indian and he or his lightning would never harm another Indian. But Wochowsen, great bird from the south, tried hard to rival Thunderbird. So Passamaquoddies feared Wochowsen, whose wings Glooscap once had broken, because he used too much power.

A result was that for a long time air became stagnant, the sea was full of slime, and all of the fish died. But Glooscap saw what was happening to his people and repaired the wings of Wochowsen to the extent of controlling and alternating strong winds with calm.