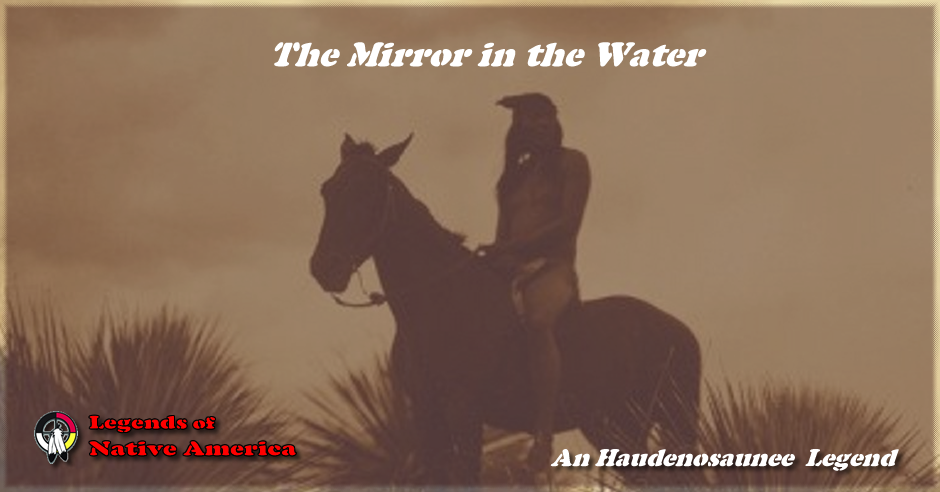 When the Great Spirit made the earth and put the water in the deep valleys to form lakes, and built the springs in the mountains to form streams and rivers, he did not give to the water the power to show within its surface his children's faces or to make the trees appear to grow with their branches pointing deep into the ground. For many thousands of summers the younger sister of the sun was never seen far down in the bosom of the lake at night, and many times young men grew old and died before the sun could see himself in the river, the warriors could put on their war-paint by the deep pool in the woods, or the maidens plait their braids with their smiling faces reflected from the laughing stream that flowed beside the wigwams.

The red men lived together peacefully and happily then beside a great river. One day the young hunters came home in haste from the chase and reported the coming of many strange people from beyond the river. They said the strange men carried bows twice the height of the tallest chief known in the peaceful tribes, or held in their hands branches of trees to which were attached sharpened stones of great size. The chiefs and wise men assembled, and scouts and runners were sent forth to see if the young hunters had not been deceived by the evil spirits of the woods. But the young hunters had not looked with double eyes, and the strange warriors were as many as the pebbles on the bank of the river. The hearts of the red men were filled with fear, for they knew not then how to fight against such numbers, and the sachems arose from the council-fire and went forth to the cave in the rocks where the Great Spirit talked with them. The Great Spirit told his children that he would care for them and protect them from the strange warriors, and he told the people to fear not, but to obey the three fathers and firekeepers of the nation. When the night came the fathers told the men and women to build many fires on the shore of the river, and when the fires were built the red men were filled with fear to see burning, deep down in the water, a fire for each fire on the shore.

The water never changed again, for the Great Spirit saw it gave his children pleasure, and he loved his children then.