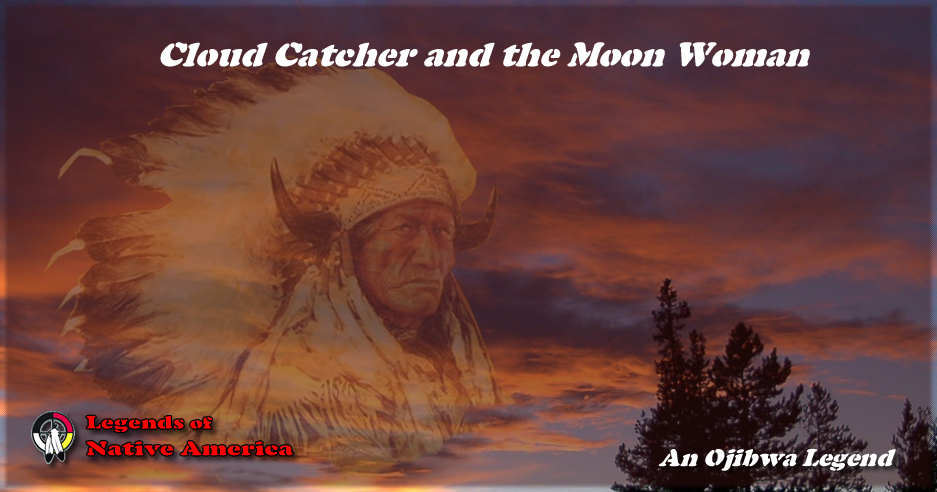 "Cloud Catcher, I have come for you," she said. And as she turned away he felt impelled to rise and follow. But, instead of walking, she began to move into the air with the flight of an eagle, and, endowed with a new power, he too ascended beside her. The earth was dim and vast below, stars blazed as they drew near them, yet the radiance of the woman seemed to dull their glory. Presently they passed through a gate of clouds and stood on a beautiful plain, with crystal ponds and brooks watering noble trees and leagues of flowery meadow; birds of brightest colors darted here and there, singing like flutes; the very stones were agate, jasper and chelcedony. An immense lodge stood on the plain, and within were embroideries and ornaments, couches of rich furs, pipes and arms cut from jasper and tipped with silver. While the young man was gazing around him with delight, the brother of his guide appeared and reproved her, advising her to send the youn man back to earth at once, but, she flatly refused to do so, he gave a pipe and bow and arrows to Cloud Catcher, as a token of his consent to their marriage, and wished them happiness, which, in fact, they had.

This brother, who was commanding, tall, and so dazzling in his gold and silver ornaments that one could hardly look upon him, was abroad all day, while his sister was absent for a part of the night. He permitted Cloud Catcher to go with him on one of his daily walks, and as they crossed the lovely Sky Land they glanced down through open valley bottoms on the green earth below. The rapid pace they struck gave to Cloud Catcher an appetite and he asked if there were no game. "Patience," counseled his companion. On arriving at a spot where a large hole had been broken through the sky they reclined on mats, and the tall man loosing one of his silver ornaments flung it into a group of children playing before a lodge. On of the little ones fell and was carried within, amid lamentations. Then the villagers left their sports and labors and looked up at the sky. The tall man cried, in a voice of thunder, "Offer a sacrafice and the child shall be well again." A white dog was killed, roasted, and in a twinkling it shot up the the feet of Cloud Catcher, who, being empty, attacked it voraciously.

Many such walks and feasts came after, and the sights of earth and taste of meat filled the mortal with longing to see his people again. He told his wife that he wanted to go back. She consented, after a time, saying, "Since you are better pleased with the cares, the ills, the labor, and the poverty of the world than with the comfort and abundance of Sky Land, you may return; but remember you are still my husband, and beware how you venture to take an earthly maiden for a wife."

She arose lightly, clasped Cloud Catcher by the wrist, and began to move with him through the air. The motion lulled him and he fell asleep, waking at the door of his father's lodge.

His relatives gathered and gave him welcome, and he learned that he had been in the sky for a year. He took the privatations of a hunter's and warrior's life less kindly than he though to, and after a time he enlivened its monotony by taking to wife a bright-eyed girl of his tribe. In four days she was dead. The lesson was unheeded and he married again. Shortly after, he stepped from his lodge one evening and never came back. The woods were filled with a strange radiance on that night, and it is asserted that Cloud Catcher was taken back to the lodge of the Sun and Moon, and is now content to live in heaven..