Birth of the Arbutus 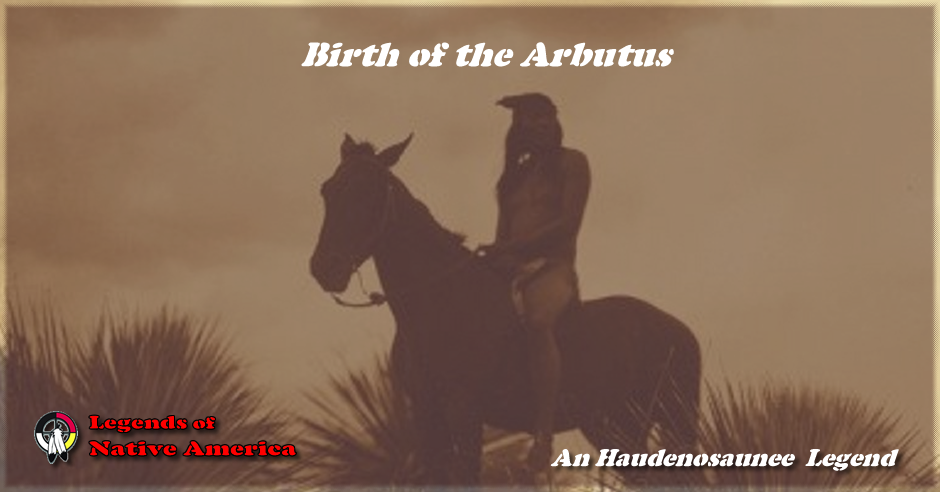 Many, many moons ago there lived an old man alone in his lodge beside a frozen stream in the great forest beyond the wide waters of the northern lakes, locks were long and white with age and frost. The fur of the bear and cunning beaver covered his body, but none too warmly, for snow and ice were everywhere. Over all the earth there was winter. The winds came down the bleak mountain sides and wildly hurried through the branches of the trees and bushes, looking for songbirds that they might chill to the heart. Even the evil spirits shivered in the desolation and sought to dig for themselves sheltering caves in the deep snow and ice. Lonely and halting the old man went abroad in the forest, looking for the broken branches that had fallen from the trees that he might keep alive the fire in his lodge. Few fagots could he find, and in despair he again sought his lodge, where, hovering over the fading embers on his hearth, he cried in anguish to the Great Spirit that he might not perish.

Then the wind moaned in the tree-tops and circling through the forests came back and blew aside the skin of the great bear hanging over his lodge door, and, lo! a beautiful maiden entered. Her cheeks were red like the leaves of wild roses; her eyes were large and glowed like the eyes of the fawn at night; her hair was black as the wing of the crow, and so long that it brushed the ground as she walked. Her hands were clad in willow buds; over her head was a crown of flowers; her mantle was woven with sweet grasses and ferns, and her moccasins were white lilies, laced and embroidered with the petals of honeysuckle. When she breathed, the air of the lodge became warm, and the cold winds rushed back in affright.

The old man looked in wonder at his strange visitor, and then opened his lips and said: ''My daughter, thou art welcome to the poor shelter of my cheerless lodge. It is lonely and desolate, and the Great Spirit has covered the fallen branches of the trees with his death-cloth that I may not find them and light again the fire of my lodge. Come, sit thou here and tell me whom thou art that thou dost wander like the deer in the forest. Tell me also of thy country and what people gave thee such beauty and grace, and then I, the desolate Manito, will tell thee of my victories till thou dost weary of my greatness."

The maiden smiled, and the sunlight streamed forth and shot its warmth through the roof of the lodge. The desolate Manito filled his pipe of friendship, and when he had drawn of the fragrant tobacco, he said: "When 1, the Manito, blow the breath from my nostrils the waters of the river stand still, the great waves on the lakes rest,
and the murmurings of the streams die away in silence."

Then the maiden said: "The Manito is great and strong and the waters know the touch of his breath ; but when I, the loved of the birds, smile, the flowers spring up over all the forest and the plains are covered with a carpet of green."

Then said the Manito: "I shake my locks, and lo! the earth is wrapped in the death-cloth of snow." Then the maiden replied: " I breathe into the air and the warm rains come and the death-cloth vanishes like the darkness when the great fire awakens from its bed in the morning."

Then the Manito said : "When 1 walk about, the leaves die on the trees and fall to the ground ; the birds desert their nests and fly away beyond the lakes; the animals bury themselves in holes in the earth or in caves in the mountain side, and the winds wail the death-chant over all the land."

"Ah, great is the Manito," said the maiden, *'and his mighty name is feared by all living things in the land. 'Great is the Manito,' says all the world, and his fame has spread among the children of the Great Spirit till they crouch with fear and say: 'Mighty and cruel is the Manito! Terrible is the Manito, and more cruel and cunning in his tortures than the red men. His strength is greater than the strength of the giant trees of the forest, for does he not rend them with his mighty hands . But when I, the gentle maiden, walk forth, the trees cover with many leaves the nakedness which thou, the great Manito, hath caused; the birds sing in the branches and build again the nests from which thou drivest them ; the animals seek their mates and rear their young; the wind sings soft and pleasant music to the ears of the red man, while his wives and papooses sport in the warm sunshine near his wigwam."

As the maiden spoke, the lodge grew warm and bright, but the boasting Manito heeded it not, for his head drooped forward on his breast, and he slept.

Then the maiden passed her hands above the Manito's head and he began to grow small. The blue birds came and filled the trees about the lodge and sang, while the rivers lifted up their waters and boiled with freedom. Streams of water poured from the Manito's mouth, and the garments that covered his shrunken and vanishing form turned into bright and glistening leaves.

Then the maiden knelt upon the ground and took from her bosom most precious and beautiful rosewhite flowers. She hid them under the leaves all about her, and as she breathed with love upon them, said:

"I give to you, oh! precious jewels, all my virtues and my sweetest breath, and men shall pluck thee with bowed head and on bended knee." Then the maiden moved over the plains, the hills and the mountains. The birds and the winds sang together in joyous chorus, while the flowers lifted up their heads and greeted her with fragrance.

Wherever she stepped, and nowhere else, grows the arbutus.