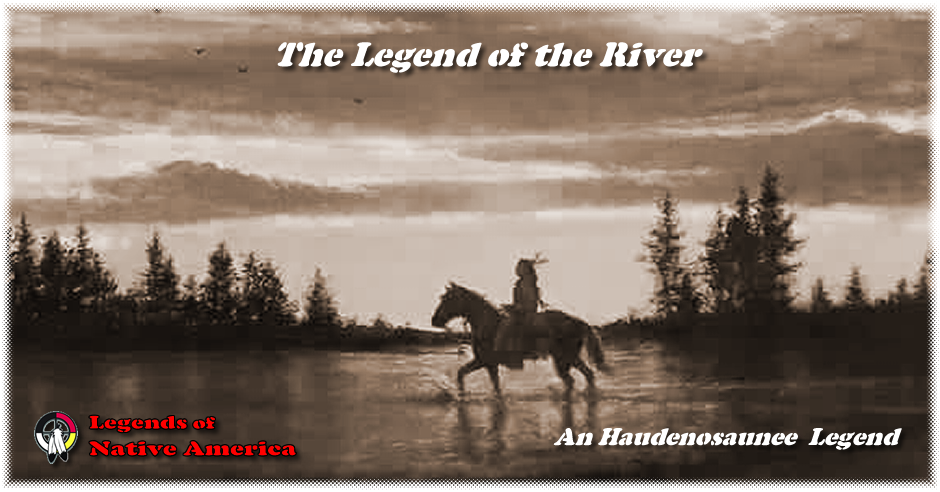 Many hundred moons ago there dwelt among the Senecas a maiden named Tonadahwa, whom every young chief coveted to grace his wigwam. One of the young braves of her tribe had won her heart by imperiling his life to save her from impending danger, and to none other would she listen. Her smiles were all for her hero, and her eyes lighted like the sunbeams when he was near.

One day the maiden was urging her canoe swiftly along the river, little thinking that great danger awaited her and threatened her life and happiness. Darting along the bank of the stream, unseen by Tonadahwa, was a young Seneca warrior, who had been a suitor for her hand, but whom she had spurned and avoided. Her light canoe had borne her far from the village of the Senecas, when she suddenly heard what she supposed was the call of her lover on the shore. Resting on her paddle, Tonadahwa listened and again heard the welcome call that deepened the rich color in her rounded cheeks. Answering with a cry of joy, she headed the canoe toward the bank, and with a few strokes sent it gliding underneath the overhanging branches.

But it was not the form of Tonadahwa's lover that sprang suddenly into the canoe. It was that of the dark and angry rival, and she saw in his face a look of evil triumph.

The maiden uttered no shriek, gave expression to no surprise, though her eyes darkened and her cheeks assumed a duskier hue. With an exclamation that almost drove hope from Tonadahwa's heart, the hated lover caught the paddle from her hands and sent the light craft rapidly towards the middle of the stream.

Suddenly a bright object cleft the air and an arrow sped from the bank of the river and buried itself between the shoulders of the cowardly abductor as he bent forward to clasp the shrinking maiden in his arms. With a cry, the defeated rival leaped into the river, hurling the paddle from him as he sprang, and with his last remaining effort pushed the canoe and its occupant far out into the rapid current. The whirling, seething rapids caught the helpless craft and bore it onward with terrific speed. Tonadahwa waved a farewell to her lover, and, chanting her death-song, which the pines along the shore caught and whispered, the canoe went flying amid the mist and spray of that roaring tide.

Green as the emerald, save where whipped into white foam or enshrouded in mist, the river rushed on, and the frail canoe, tossed as a plaything at the sport of the current, was whirled onward until lost in the roar and tumult of the impetuous flood.

Like the wind the despairing lover flew along the shore to the high banks overlooking the falls. There he paused a moment until the canoe and its precious freight were lost to view. Then, raising his arms a moment toward the Happy Hunting- Grounds, he leaped into the fearful abyss.

But amid the pelting spray and beating flood appeared myriads of shadowy forms—spirits of the mighty braves who long before had found the land of pleasant forests. Swiftly, yet gently, they lowered the form of the hero until he stood unharmed beneath the fall of roaring water, and received in his arms the unconscious form of Tonadahwa, which was held by the braves to await his coming.

Clinging to the broken rocks, buffeted and blinded by the awful flood, the daring and triumphant Seneca bore his loved burden to a place of safety and watched with thankfulness her return to consciousness and life.

The pine trees ever after gently murmured Tonadahwa's song, and, mingled with the roar of waters, listening lovers through all succeeding time can often hear the strange, weird cry of Tonadahwa's lover as he plunged headlong after the beloved maiden.