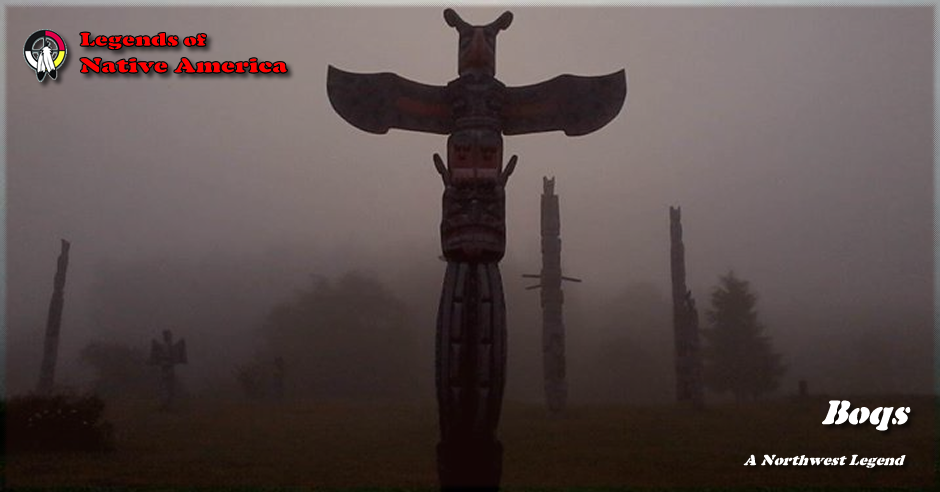 Not many years ago a certain Bella Coola man named Qaklis was encamped with his wife and child in the Bay of the Thousand Islands, Altukwlaksos, about two miles above Namu, one of the haunts of the boqs.

He heard a number of the creatures in the forest behind him and seized his gun, at the same time calling out to them to go away. Instead, the breaking of branches and beating upon tree-trunks came nearer. Becoming alarmed, he called out once more: "Go away, or you shall feel my power." They still approached and Qaklis fired in the direction of the sounds. There followed a wild commotion in the forest, roars, grunts, pounding, and the breaking of branches. The hunter, now thoroughly alarmed, told his wife and child to embark in the canoe while he covered their retreat with his gun. He followed them without molestation, and anchored his craft not far from shore. The boqs could be heard plainly as they rushed to and fro on the beach, but only the vague outlines of their forms were visible in the darkness.

Presently, though there was no wind, the canoe began to roll as if in a heavy sea. Qaklis decided to flee to Restoration Bay, but before he had gone far his paddle struck bottom, although he was in mid-channel. Looking up, he saw that the mountains were higher than usual; the boqs had, by their supernatural power, raised the whole area so that the water had been almost entirely drained away. They are the only supernatural beings with this power. Qaklis jumped overboard into the water which reached only to his knees, and towed his canoe to Restoration Bay, the boqs following him along the shore.

This is not the only occasion on which boqs have appeared near Restoration Bay. Within the life-time of the father of an informant, a chief set out with some friends from Kwatna, bound for Namu. They traveled overland to Restoration Bay, thence by canoe, making the journey without incident. When returning, they decided to gather clams on the rocky point of the bay. As the craft shot around the tip of the promontory, they saw a boqs gathering shellfish. The paddlers backed their canoe behind some rocks whence they could watch without being seen. The creature acted as if frightened, it kept looking backwards, then hurriedly scraped up some clams with its forepaws, dashed off with these into the forest, and came back for more.

The chief decided to attack the animal. A frontal approach was impossible owing to the lack of cover, so he landed and crept stealthily through the forest, armed with his Hudson's Bay Company's musket. Presently he stumbled upon a heap of clams which the animal had collected. He waited until it returned with another load, then raised his musket and fired. Instead of killing the boqs, its supernatural power was so great that the hunter's musket burst in his hands, though he himself was not injured. The boqs shrieked and whistled as if in anger, and at once hordes of its mates came dashing out through the forest. The frightened chief rushed out on the beach and called to his comrades to save him. They brought the canoe close to the shore so that he could clamber aboard, and then paddled away unharmed.

The Bella Coola believe that the boqs, unlike most supernatural animals, have not abandoned the country since the coming of the white man. One man was most insistent that they still lived on King Island, and promised to point one out if a visit were made to that spot. This man refuses to camp at the place where he affirmed, boqs are common. Another informant stated that though he had never seen one of the monsters, a horde of them surrounded his camp near Canoe Crossing for a week.

Every night he heard them roaring and beating on trees and branches. A curious blending of old and new beliefs was recorded in connection with this statement. This man remarked that once he was gathering firewood when he heard the creatures closing in on him. His head swam with terror, until he remembered he was a Christian; he called on Jesus to help him, grasped his axe, and dashed towards the place from which the loudest sounds were coming. He heard the animals moving off all around him, but failed to see any of them.

Boqs have been heard as recently as 1924 according to popular belief. In January of that year a number of young Bella Coola were returning home in a motor-boat from Ocean Falls. They camped for the night on Burke Channel, and were alarmed to hear a crashing of bushes and a beating on tree-trunks. Thoroughly frightened, they directed the beams of several electric torches in the direction of the sounds without avail and at last started the engine of their motor-boat, the noise of which frightened the animals away.