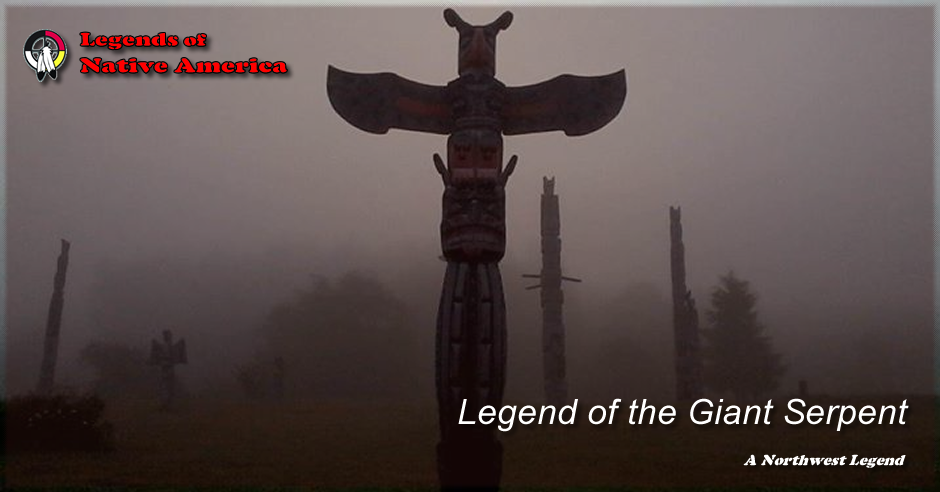 At the time when the events described took place, there were Squamish natives living on what is now Kitsilano Beach in Vancouver; and another group at the site of Tum-ta- mayh-tun, a point which divides Burrard Inlet from the Indian Arm.

One summer the Haidas came-down from the Queen Charlotte Islands, and landed on Kitsilano Beach in the oyster grey hours before dawn, catching the Squamish tribe asleep. The fierce battle that ensued was an absolute massacre, and only two children escaped, to tell the tale of horrors. A girl of fourteen and her little brother aged six, crept away while the Haidas were celebrating their victory. Carrying her brother, the girl struggled though the forest along the shore of Burrard Inlet; tramping in salal bushes, resting the small boy occasionally on fallen logs; calming his fears, after the shock of the battle. The distance to Tum-ta-mayh-tun was about seventeen miles, and she arrived completely exhausted.

When she and her brother had been given some food, she put him to sleep, and then made her appeal for vengeance. She implored the Chief (of Tum-ta-mayh-tun) to call his men together and paddle swiftly down to fight the Haidas and wipe them out. The Chief explained that he hadn‘t enough men for the expedition to have any chance of success, as the Haidas had a reputation for being very great warriors. In vain the girl pleaded, until, worn-out after the long walk, and disappointed that her parent‘s death could not be avenged, she fell asleep. In her sleep she had a curious dream.

She and her little Brother were alone on the beach. A big wave rolled in, and from its curling foam a giant serpent emerged. Terrified, she was about to seize Little Brother and run away with him, but the serpent‘s quiet voice stopped her. He assured her that they were in no danger, and added that he had certain instructions to give her about the care of her Little Brother.

He will be a big medicine man. Your brother will lead and everyone will follow his order, if you bring him up as I tell you. Are you willing to obey me?

Hoping the Giant Serpent might be offering her a chance to avenge the death of her parents, she agreed. The Serpent raised himself higher out of the water so that his voice might be more clearly heard above the swish and splash of restless waves. .You are to tell the Chief that he must send men up this hill to build a teepee for you and your brother. There you must live all alone with him. No one must ever be allowed to see him until his time comes. They must put food for you half way up the hill every evening; and you must fetch it yourself and take it to your teepee. Every morning at sunrise, bring your brother down to this shore to bathe. Warn the Chief that no one may come near this place until the sun is high. Take your brother for long walks in the forests, that he may be strong. Feed him on mowithce (deer meat) and fish, and father herbs in the woods to make good broth for him. He must get wood for your fire; you must put fresh moss on the floor of your teepee every day..

The Giant Serpent turned and was carried away by a monster wave, and the girl woke up. Beside her lay her small brother, still fast asleep. She gazed at him in awe, wonder what tasks lay before him, then she carried him part way up the hill and hid him behind a bush. He woke up as she laid him down. .Lie there and keep quiet until I return,. she ordered him.

The women were told to put food each evening at a place chosen by the girl; and everyone received orders that the hill, the lake and the forest above it were out of bounds. Taking food with her, the girl rejoined her brother and they spent their first night on the hillside where she had hidden him. Next day they moved into their own teepee.

For nine and half years they lived as they had been ordered. They bathed each day before dawn; they went for long walks in the forest gathering herbs, and fresh moss for their teepee. Then one morning, as they were enjoying themselves bathing in the sparkling waters of the Inlet, diving, swimming, and splashing each other with spray, which glistened like diamonds on their red bronze bodies, the Giant Serpent suddenly appeared, seized Little Brother and carried him off beneath the waves. In her dismay his sister began to cry bitterly, thinking her Little Brother was drowned; for the Serpent had coiled around the boy, so he had no chance to save himself. The Serpent reappeared, gliding gently up the shallow waters of the beach.

Fear not,. said he, .Your brother will return. Go on living in your teepee and let no one else come there.. With a few smooth twists of his powerful body, he slid back and a huge wave rolled up to carry him away. For a few moments the girl sat still, thinking over not only what the Serpent had just said, but his first instruction and promises too. Finally she wended her way sadly up the hill, dreading the loneliness of the life she must now lead, and wondering how long it would be before Little Brother would be back.

Six months later, there came a day, when returning from her walk, her arms full of herbs, she saw when she reached the entrance to the teepee that a man was lying on Little Brother‘s pile of deer skins. Dropping her bundle she rushed across the moss- strewn floor, bitterly reproaching the stranger for daring to invade her privacy. The man woke up, and turned over, smiling at her the while. It was Little Brother, grown so much taller that she could hardly believe it was him until he spoke. For a short space of time, he listened to her endearments, and the tale of how much she had missed him; but then staying her speech, began to give her orders.

You must go to see the Chief. Tell him to choose eleven of his strongest young men and bid them make twelve staves of hardwood with sharply pointed ends. They must get a canoe ready and practice daily together, so that they can paddle swiftly. This must be done in twelve days. When that time has passed, at flood tide, I will go down to the beach. Do not tell them what I propose, for I intend to take them up the North Arm to kill the serpent who lives on top of the cliff, beside the lake.. (Buntzen Lake)

To kill the serpent?.

Yes, because there is better hunting and fishing up there than anywhere else, but no one ever dares to go because they fear the serpent may come down and kill them..

But I thought — I hoped — that you were preparing to fight the Haidas..

Later, sister. First I must win the men‘s confidence. If they follow me where none have ever dared to venture and we kill the monster, they will consider themselves seasoned warriors, ready to follow me again, wherever I lead. Then we can fight the Haidas that they will never again dare to disturb these waters.

Disappointed, puzzled, but still loyal to her beloved Little Brother, Big Sister went down to see the Chief. All the tribe was astonished to hear that the boy they thought was drowned had returned a full-grown man. The girl had made no mention of the Giant Serpent carrying him off, but let them infer had been drowned when bathing, caught by some treacherous undertow. That he had now returned was a miracle, and great haste was made to obey his orders. On the appointed day, eleven young men, armed with the twelve staves, waited by the beach with their canoe.

When Little Brother, now an important medicine man, came down, he directed them to put rocks in the canoe. These were quickly collected and the youths stood waiting for further orders. The Medicine Man handed a herb to each young man and told him to eat it; for he knew that these herbs would banish their fears and so they would have more courage. He then seated himself in the bow of the canoe, and when the crew had taken their places turned to speak to them.

Paddle very swiftly past the place where the serpent comes down. When he sees us he will come rushing at us. You must throw the rocks so that the spray, when they hit the water, will hide us from him. Then we can dash in to one side, where he won‘t expect us, and pierce him with these staves until he is dead..

Seizing their paddles, they shot around the point, heading up the North Arm. The serpent came tearing down the rocky slopes into the water, but Little Brother‘s strategy was successful. The Big Serpent was truly blinded by the spray, and attacking him on one side, as he stood in the bow of the canoe, Little Brother struck with such force that he alone nearly killed the monster, who soon died from the many wounds he received.

The return to Tum-ta-mayh-tun relieved a period of great tension. The Chief had worried and wondered if he had done right in risking young lives. But their triumphant return, towing the carcass of the Big Serpent, dispelled his fears. A feast was quickly prepared and special offerings produced for the young Medicine Man, who was treated as a god. Seated beside the Chief at the feast, he ate sparingly, pondering on what he should say. When the feast ended, he stood up and revealed the purpose of his training. He called on the Chief and all the tribe to attack the Haidas and avenge the death of their kinsmen. Six weeks later, after a period of strenuous training, the attack was made; the Haidas were all killed, and Big Sister‘s hopes were at last fulfilled.