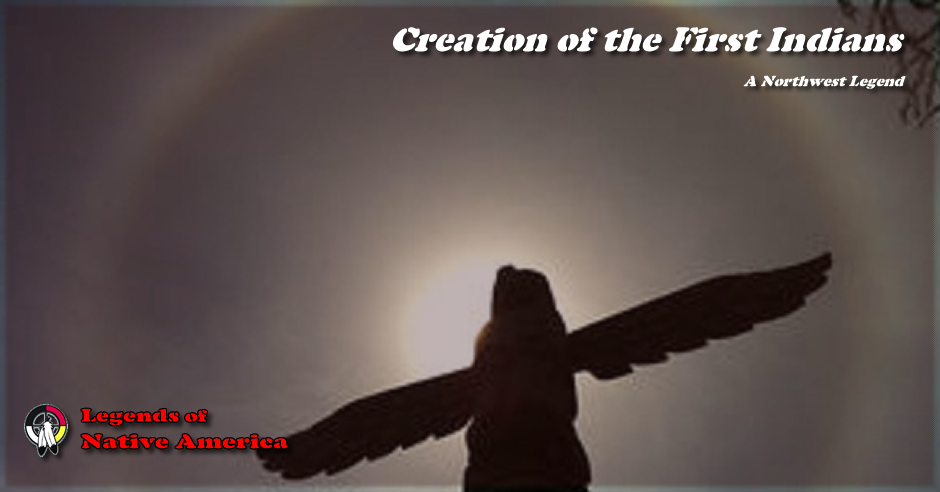 This story is told by the Chelan Indians, who live beside a long lake in the central part of the state of Washington. The lake is called Lake Chelan (pronounced sha- lan), meaning "Beautiful Water".

Long, long ago, the Creator, the Great Chief Above, made the world. Then he made the animals and the birds and gave them their names--Coyote, Grizzly Bear, Deer, Fox, Eagle, the four Wolf Brothers, Magpie, Bluejay, Hummingbird, and all the others.

When he had finished his work, the Creator called the animal people to him. "I am going to leave you," he said. "But I will come back. When I come again, I will make human beings. They will be in charge of you."

The Great Chief returned to his home in the sky, and the animal people scattered to all parts of the world.

After twelve moons, the animal people gathered to meet the Creator as he had directed. Some of them had complaints. Bluejay, Meadowlark, and Coyote did not like their names. Each of them asked to be some other creature.

"No," said the Creator. "I have given you your names. There is no change. My word is law.

Then he took something from his right side and put it in the river. It swam, and the Creator named it Beaver.

"Now I will give you another law," said the Great Chief Above. "The one of you who keeps strong and good will take Beaver from the water some day and make it into a human being. I will tell you now what to do. Divide Beaver into twelve parts. Take each part to a different place and breathe into it your own breath. Wake it up. It will be a human being with your breath. Give it half of your power and tell it what to do. Today I am giving my power to one of you. He will have it as long as he is good."

When the Creator had finished speaking, all the creatures started for their homes--all except Coyote. The Great Chief had a special word for Coyote.

"You are to be head of all the creatures, Coyote. You are a power just like me now, and I will help you do your work. Soon the creatures and all the other things I have made will become bad. They will fight and will eat each other. It is your duty to keep them as peaceful as you can.

"When you have finished your work, we will meet again, in this land toward the east. If you have been good, if you tell the truth and obey me, you can make the human being from Beaver. If you have done wrong, someone else will make him."

Then the Creator went away.

It happened as the Creator had foretold. Everywhere the things he had created did wrong. The mountains swallowed the creatures. The winds blew them away. Coyote stopped the mountains, stopped the winds, and rescued the creatures. One winter, after North Wind had killed many people, Coyote made a law for him: "Hereafter you can kill only those who make fun of you."

Everywhere Coyote went, he made the world better for the animal people and better for the human beings yet to be created. When he had finished his work, he knew that it was time to meet the Creator again. Coyote thought that he had been good, that he would be the one to make the first human being.

But he was mistaken. He thought that he had as much power as the Creator. So he tried, a second time, to change the laws of the Great Chief Above.

"Some other creature will make the human being," the Creator told Coyote. "I shall take you out into the ocean and give you a place to stay for all time."

So Coyote walked far out across the water to an island. There the Creator stood waiting for him, beside the house he had made. Inside the house on the west side stood a black suit of clothes. On the other side hung a white suit.

"Coyote, you are to wear this black suit for six months," said the Creator. "Then the weather will be cold and dreary. Take off the black suit and wear the white suit. Then there will be summer, and everything will grow.

"I will give you my power not to grow old. You will live here forever and forever."

Coyote stayed there, out in the ocean, and the four Wolf brothers took his place as the head of all the animal people. Youngest Wolf Brother was strong and good and clever. Oldest Wolf Brother was worthless. So the Creator gave Youngest Brother the power to take Beaver from the water.

One morning Oldest Wolf Brother said to Youngest Brother, "I want you to kill Beaver. I want his tooth for a knife."

"Oh, no!" exclaimed Second and Third Brothers. "Beaver is too strong for Youngest Brother."

All the animal persons had seen Beaver and his home. They knew where he lived. They knew what a big creature he was. His family of young beavers lived with him.

But they made the four spears he had asked for.

At dusk, the Wolf brothers tore down the dam at the beavers' home, and all the little beavers ran out. About midnight, the larger beavers ran out. They were so many, and they made so much noise, that they sounded like thunder. Then Big Beaver ran out, the one the Creator had put into the water to become clean.

"Let's quit!" said Oldest Wolf Brother, for he was afraid. "Let's not try to kill him."

"No!" said Youngest Brother. "I will not stop."

It pierced the skin of Big Beaver and stayed there. Out of the lake, down the creek, and down Big River, Beaver swam, dragging Youngest Brother after it.

Youngest Wolf called to his brothers, "You stay here. If I do not return with Beaver in three days, you will know that I am dead."

Three days later, all the animal persons gathered on a level place at the foot of the mountain. Soon they saw Youngest Brother coming. He had killed Beaver and was carrying it. "You remember that the Creator told us to cut it into twelve pieces," said Youngest Brother to the animal people.

But he could divide it into only eleven pieces.

Then he gave directions. "Fox, you are a good runner. Hummingbird and Horsefly, you can fly fast. Take this piece of Beaver flesh over to that place and wake it up. Give it your breath."

"There have to be twelve tribes," said Youngest Brother. "Maybe the Creator thinks that we should use the blood for the last one. Take the blood across the Shining Mountains and wake it up over there. It will become the Blackfeet. They will always look for blood."

When an animal person woke the piece of Beaver flesh and breathed into it, he told the new human being what to do and what to eat.

"Here are roots," and the animal people pointed to camas and kouse and to bitterroot, "You will dig them, cook them, and save them to eat in the winter.

"Here are the berries that will ripen in the summer. You will eat them and you will dry them for use in winter."

The animal people pointed to chokecherry trees, to serviceberry bushes, and to huckleberry bushes.

"There are salmon in all the rivers. You will cook them and eat them when they come up the streams. And you will dry them to eat in the winter."

When all the tribes had been created, the animal people said to them "Some of you new people should go up Lake Chelan. Go up to the middle of the lake and look at the cliff beside the water. There you will see pictures on the rock. From the pictures you will learn how to make the things you will need."

The Creator had painted the pictures there, with red paint. From the beginning until long after the white people came, the Indians went to Lake Chelan and looked at the paintings. They saw pictures of bows and arrows and of salmon traps. From the paintings of the Creator they knew how to make the things they needed for getting their food.

Note: The paintings (or pictographs) on the lower rocks have been covered by water since a dam was built at the foot of the lake. Surprisingly high on the rocks that are almost perpendicular walls at the north end of the lake, the paintings remained for a long, long time. Then white people with guns and little respect for the past ruined them--for fun.