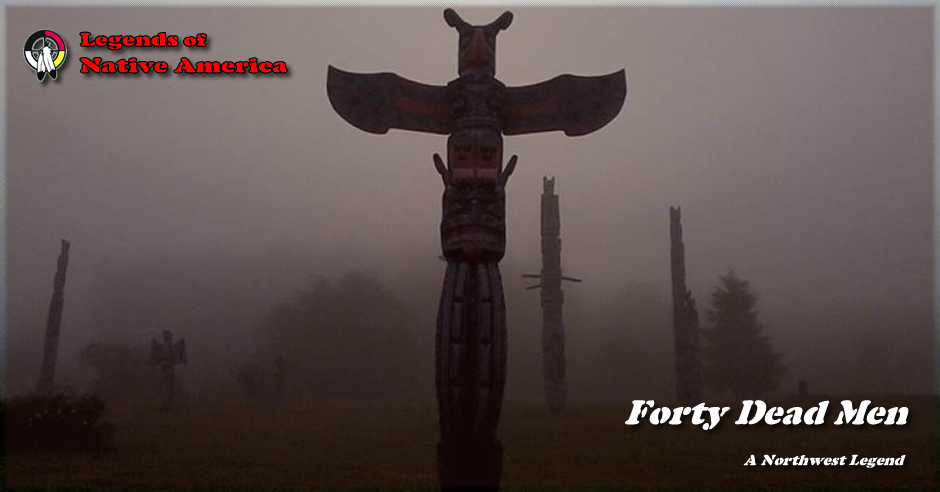 At Ozette two brothers undertook whaling, although their father had not been a whaler. The elder was unsuccessful, but the younger killed several whales the first season. Thereafter he was always lucky, while his brother always failed. The elder often asked how he got his power, but the younger whaler told nothing.

The younger brother often lay all day with his back to the fire, and he slept there at night. He seldom ate, and then only a little. The way he obtained his power was this: He dreamed of forty ghosts, and then cleared a place in the woods back of the village. Around it was a thick jungle of crab trees, which he made impenetrable by interweaving the trees and brush he had cut down, leaving only a narrow entrance. In the clearing he arranged some brush and small poles in the form of a canoe and four whales in a row. The whales were so large that he could place two corpses under them. Around the edge of the clearing he placed boards so as to make a shelf about two feet from the ground, and on it, bough to upright stakes, he stood forty dead bodies. Each held a stick in it's right hand, and he arranged a rope so that by pulling it he caused all of them to strike with their batons the board on which they stood. Another line raised the left arms of the corpses at the will of the whaler. In the brush canoe he had a full crew of seven dead men, and by means of ropes he made them paddle when he gave the order. In visiting this place the whaler always rested four times after leaving the burial ground, and on reaching the clearing he walked around it four times inside the line of corpses.

One day a son of the elder brother died, and the body was placed in a hole and covered with stones. On the fourth night the younger brother left the house. The other heard him, and softly followed him to the new grave, and silently watched him remove the stones, take out the body, and fill the hole with stones. With the body on his back, and walking in the fashion of whalers at such times, the young man went along the beach and then turned into the woods. The elder brother cautiously followed, pausing when the other rested. Whenever the whaler stopped he screeched like an owl, and prayed, "May I be given a chance to spear a whale, and may the people say it was I that did it!" When finally they reached the clearing, it was dawn.

The whaler threw the body beside the first whale, and made the dead men strike the boards with their sticks. Then he stood the new body beside the stake and lashed it there. He slowly got into the canoe, took up a harpoon, and hurled it at the first brush whale. At that instant his brother sprang through the hedge. The whaler fell unconscious, and the elder leaped upon him. When the whaler opened his eyes, he begged, "Spare my life, and I will show you how to do everything! I will let you use all this, and tell you the best places to wash!"

"Why did you not let me have this when I asked you?" demanded the elder man. "The people have been laughing at me long enough! I asked you this many years ago, but you told me nothing. Now I can take everything you have. If you had told me, this would never have happened. And you took my dead son so soon after I buried him! Though you are my brother, I cannot spare your life!" He stabbed him, but did not kill him. Still the whaler pleaded, "Let me go! Whatever I have shall be yours! If you kill me, you will have no good from these things, because you will not know how to use them. If you try to use them by yourself, you will die soon!" But the elder brother stabbed him to death. Then he lashed the warm body to the other side of the stake that supported his own son. It was now broad daylight, adn the man went home and told his wife all.

Four or five days later he returned to the clearing. He pulled on the rope, and the sticks struck the boards. Then he prayed as he had heard his brother do. He got into the brush canoe, threw the harpoon at the first whale, and said, "I have forty dead men for my power! May I spear a while, and may the people say it was I that speared it!" He heard a sound from his dead brother, then the words: "You should be ashamed! You are not doing it the right way!" Then he went home feeling very ill, and that night he died.