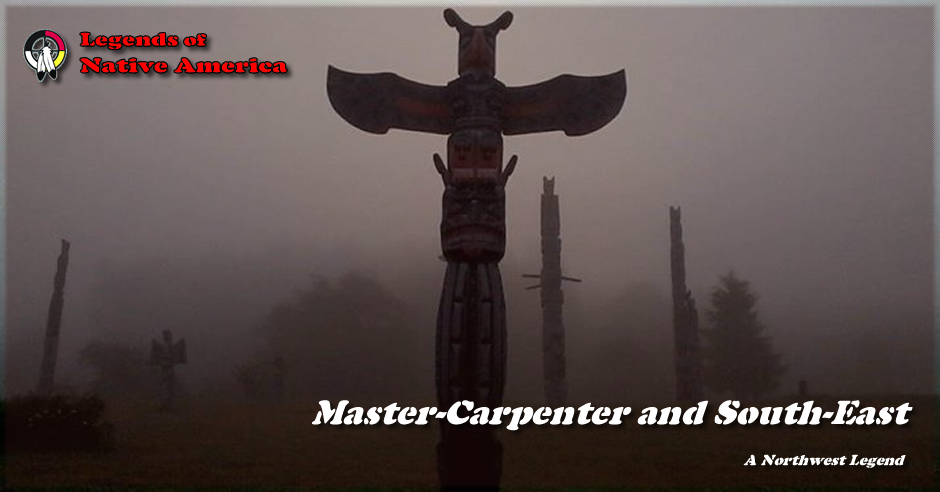 A Haida myth relates how Master-carpenter, a supernatural being, went to war with South-east (the south-east wind) at Squ-i, the town lying farthest south on the Queen Charlotte Islands. The south-east wind is particularly rude and boisterous on that coast, and it was with the intention of punishing him for his violence that Master-carpenter challenged him. First of all, however, he set about builiding a canoe for himself. The first one he made split, and he was obliged to throw it away. The second also split, notwithstanding the fact that he had made it stouter than the other. Another and another he built, making each one stronger than the last, but every attempt ended in failure, and at last, exceedingly vexed at this unskilfulness, he was on the point of giving the task up. He would have done so, indeed, but for the intervention of Greatest Fool. Hitherto Master-carpenter had been trying to form two canoes from one log by means of wedges.

Greatest Fool stood watching him for a time, amused at his clumsiness, and finally showed him that he ought to use bent wedges. And though he was perhaps the last person from whom Master-carpenter might expect to learn anything, the unsuccessful builder of canoes adopted the suggestion, with the happiest results. When at length he was satisfied that he had made a good canoe he let it down into the water, and sailed off in search of South-east.

By and by he floated right down to his enemy's abode, and when he judged himself to be above it he rose in the canoe and flung out a challenge. There was no reply. Again he called, and this time a rapid current began to float past him, bearing on its surface a quantity of seaweed. The shrewd Master-carpenter fancied he saw the matted hair of his enemy floating among the seaweed. He seized hold of it, and after it came South-east. The latter in a great passion began to call on his nephews to help him. The first to be summoned was Red-storm-cloud. Immediately a deep red suffused the sky. Then the stormy tints died away, and the wind rose with a harsh murmur.

When this wind had reached its full strength another was summoned, Taker-off-of-the-tree-tops. The blast increased to a hurricane, and the tree-tops were blown off and carried away and fell thickly about the canoe, where Master-carpenter was making use of his magic arts to protect himself. Again another wind was called up, Pebble-rattler, who set the stones and sand flying about as he shrieked in answer to the summons.

Maker-of-the-thick-sea-mist came next, the spirit of fog which strikes terror into the hearts of those at sea, and he was followed by a numerous band of other nephews, each more to be dreaded than the last. Finally Tidal-wave came and covered Master-carpenter with water, so that he was obliged to give in. Relinquishing his hold on South-east, he managed to struggle to the shore. It was said by some that South-east died, but the shamans, who ought to know, say that he returned to his own place.

South-east's mother was named To-morrow, and the Indians say that if they utter that word they will have bad weather, for South-east does not like to hear his mother's name used by any one else.