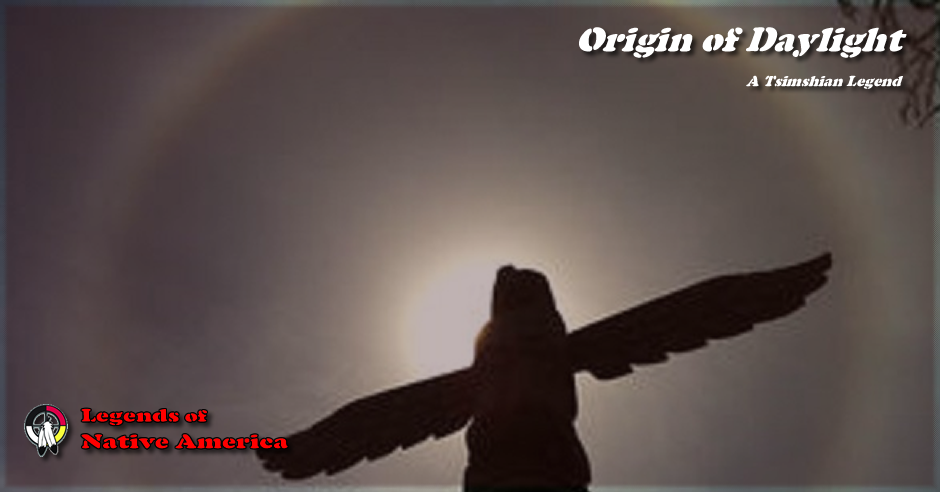 Giant flew inland (toward the east). He went on for a long time, and finally he was very tired, so he dropped down on the sea the little round stone which his father had given to him. It became a large rock way out at sea.

Giant rested on it and refreshed himself, and took off the raven skin.

At that time there was always darkness. There was no daylight then. Again Giant put on the raven skin and flew toward the east. Now, Giant reached the mainland and arrived at the mouth of Skeena River. There he stopped and scattered the salmon roe and trout roe. He said while he was scattering them, "Let every river and creek have all kinds of fish!"

Then he took the dried sea-lion bladder and scattered the fruits all over the land, saying, "Let every mountain, hill, valley, plain, the whole land, be full of fruits!"

The whole world was still covered with darkness. When the sky was clear, the people would have a little light from the stars; and when clouds were in the sky, it was very dark all over the land. The people were distressed by this. Then Giant thought that it would be hard for him to obtain his food if it were always dark. He remembered that there was light in heaven, whence he had come. Then he made up his mind to bring down the light to our world.

On the following day Giant put on his raven skin, which his father the chief had given to him, and flew upward. Finally he found the hole in the sky, and he flew through it. Giant reached the inside of the sky. He took off the raven skin and put it down near the hole of the sky. He went on, and came to a spring near the house of the chief of heaven. There he sat down and waited.

Then the chief's daughter came out, carrying a small bucket in which she was about to fetch water. She went down to the big spring in front of her father's house. When Giant saw her coming along, he transformed himself into the leaf of a cedar and floated on the water. The chief's daughter dipped it up in her bucket and drank it. Then she returned to her father's house and entered.

After a short time she was with child, and not long after she gave birth to a boy. Then the chief and the chieftainess were very glad. They washed the boy regularly. He began to grow up. Now he was beginning to creep about. They washed him often, and the chief smoothed and cleaned the floor of the house. Now the child was strong and crept about every day.

He began to cry, "Hama, hama!" He was crying all the time, and the great chief was troubled, and called in some of his slaves to carry about the boy. The slaves did so, but he would not sleep for several nights. He kept on crying, "Hama, hama!" Therefore the chief invited all his wise men, and said to them that he did not know what the boy wanted and why he was crying. He wanted the box that was hanging in the chief's house.

This box, in which the daylight was kept, was hanging in one corner of the house. Its name was Mā. Giant had known it before he descended to our world. The child cried for it. The chief was annoyed, and the wise men listened to what the chief told them. When the wise men heard the child crying aloud, they did not know what he was saying. He was crying all the time, "Hama, hama, hama!"

One of the wise men, who understood him, said to the chief, "He is crying for the mā." Therefore the chief ordered it to be taken down. The man put it down. They put it down near the fire, and the boy sat down near it and ceased crying. He stopped crying, for he was glad. Then he rolled the ma about inside the house. He did so for four days. Sometimes he would carry it to the door. Now the great chief did not think of it.

He had quite forgotten it. Then the boy really took up the mā, put it on his shoulders, and ran out with it. While he was running, some one said, "Giant is running away with the mā!" He ran away, and the hosts of heaven pursued him. They shouted that Giant was running away with the ma. He came to the hole of the sky, put on the skin of the raven, and flew down, carrying the mā. Then the hosts of heaven returned to their houses, and he flew down with it to our world.

At that time the world was still dark. He arrived farther up the river, and went down river. Giant had come down near the mouth of Nass River. He went to the mouth of Nass River. It was always dark, and he carried the ma about with him. He went on, and went up the river in the dark. A little farther up he heard the noise of the people, who were catching olachen in bag nets in their canoes.

There was much noise out on the river, because they were working hard. Giant, who was sitting on the shore, said, "Throw ashore one of the things that you are catching, my dear people!" After a while, Giant said again, "Throw ashore one of the things you are catching!" Then those on the water scolded him. "Where did you come from, great liar, whom they call Txä'msem?" The (animal) people knew that it was Giant.

Giant had repeated his request four times, but those on the water refused what he had asked for. Therefore Giant broke the ma. It broke, and it was daylight. The north wind began to blow hard; and all the fisherman, the Frogs, were driven away by the north wind. All the Frogs who had made fun of Giant were driven away down river until they arrived at one of the large mountainous islands.

Here the Frogs tried to climb up the rock; but they stuck to the rock, being frozen by the north wind, and became stone. They are still on the rock. The fishing frogs named him Txä'msem, and all the world had the daylight.