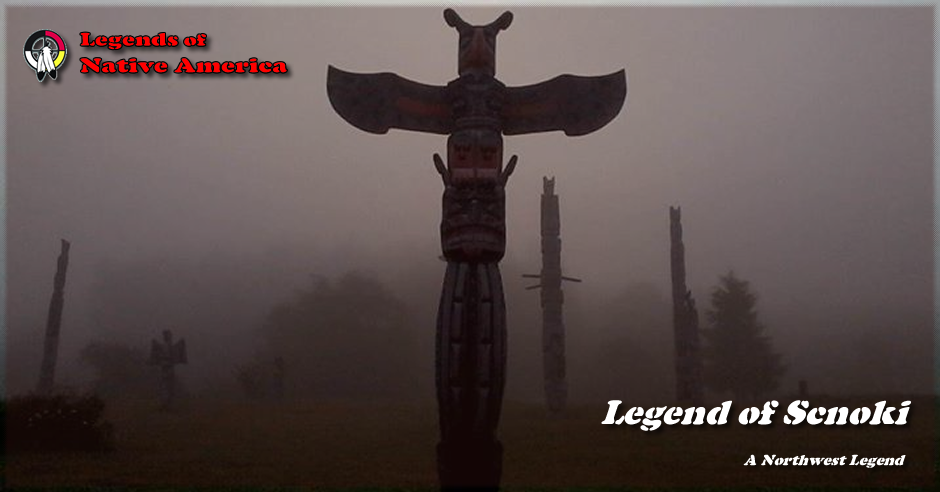 After the flood, when the waters were receding from the earth, they left a gigantic reptile, which the Indians know as .Scnoki. suspended like a huge one-span bridge over Burrard Inlet, in the vicinity of Belcarra Park where there used to be an Indian midden.

The terrible monster had heads at both ends, which were fastened to the rocks. No one dared to come near it because all living things that approached it would curl and twist up, and die instantly. People who wished to pass the dread spot had to portage their canoes around it at Brighton Beach and Buntzen.

Great was the fear of the people. The abode of the awful creature was a place of evil to be avoided by all. Even the wild habitués of the forest crept stealthily around it, letting their padded feet fall in the utmost silence.

All the birds that flew near there hushed their singing and escaped frantically to safer branches.

When storms rolled over the mountains there were sounds of awful portent mingled with the howling gale, and the fire of the lightning itself was not more deadly than the scorching rays of the reptile‘s glittering eyes. Only the gaunt old eagle soaring at dizzy heights above dared to gaze upon it, and even he flew over with a wild scream, as swiftly as his great wings could carry him.

The hearts of the people were cold with fear, and they longed for deliverance from the accursed thing, but none dared to approach it, much less attack it, lest in some vague mysterious manner vengeance should be wrought upon them A brother and sister lived together near where Belcarra Park now is. The sister was the older of the two and daily she bathed and cared for her little brother =till he was big enough to bathe himself. Then he went in to swim alone. Once, while his sister watched him from the shore, he disappeared from sight. Greatly alarmed, she called for help. Men launched their swift canoes to go to his rescue.

Once they caught sight of him swimming far beneath the deep, green water, but though they paddled with all their might, they could not catch up with him. When they neared the site of the city of Vancouver, they saw him for a moment waist-high above the waves. Then he disappeared and was seen no more, one more victim of the dread Scnoki.

The sister went sadly about her tasks at home, but never gave up hope that her brother would one day return. Every night she made his bed in readiness for him and listened for the sound of his footfall at the door.

And so the time passed =till a whole year had gone by since he sped away beneath the rushing waters of the Inlet. Then one night while all the people slept he came back and went to bed as though nothing had happened. Great was the joy of his sister to behold his face again.

When he arose in the morning he said he had been all over the world. He had been to many countries and had seen wonderful things. He had come back to kill Scnoki and to deliver the people from his baleful presence.

He went to the woods and made eight spears of pitch-wood. Very carefully and very strong he made them. Then he addressed the monster: .Depart from my people forever and take your curse with you,. hurling the spears as he spoke. His hand was steady and his sight was sure. One after another the spears found their mark and as the eighth went straight to the target Scnoki relaxed his hold on the rocks, slowly drew his colossal body across the Inlet, climbed over the mountains, disappeared into Lake Buntzen and was seen no more.

For the incredulous ones who doubt the truth of this story, the Indians will show the rocks on either side of the Inlet which still bear the marks where Scnoki‘s awful heads were fastened. It is said that on the ground over which his frightful body crawled as it travelled to the Lake, no living thing has ever grown. No blade of grass and no moss can thrive there to this day. And that is the story of Scnoki.

Author‘s Note: There are different versions of the serpent story, but the Schlawaltuch (Tsleil-Waututh) version, as told by Annie =Tah‘ George (Ce-qual-lia or Se-quail-yah), wife of Chief George Sla-holt, is as follows: