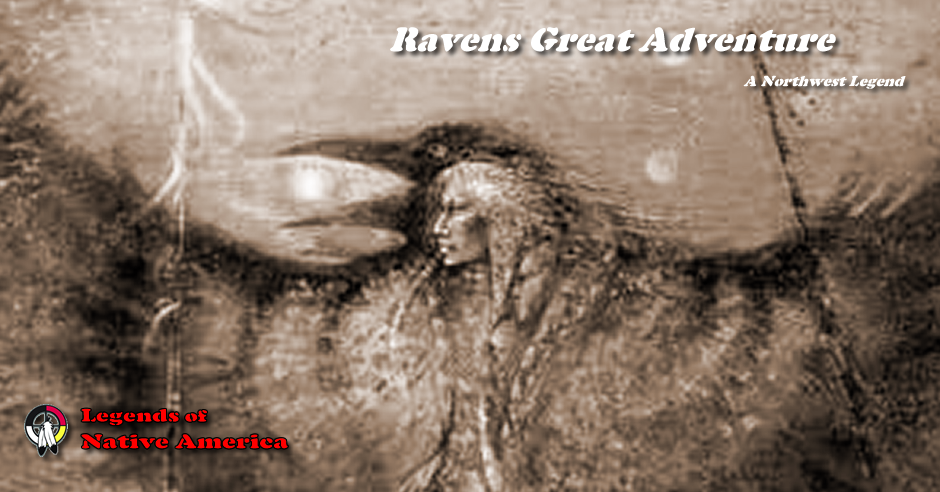 The Innu carve strange and beautiful figures, representing people, animals, birds, fish, and supernatural characters, then paint them with bright colors. The tallest red cedar trees are selected for totem poles, and are used for landmarks as well as illustrating the legends told from generation to generation.

On one of these poles was carved a stunning Raven, but he had no beak!

The Raven in Alaska was no ordinary bird. He had remarkable powers and could change into whatever form he wished. He could change from a bird to a man, and could not only fly and walk, but could swim underwater as fast as any fish.

One day, Raven took the form of a little, bent-over old man to walk through a forest. He wore a long white beard and walked slowly. After a while, Raven felt hungry. As he thought about this, he came to the edge of the forest near a village on the beach. There, many people were fishing for halibut.

In a flash, Raven thought of a scheme. He dived into the sea and swam to the spot where the fishermen dangled their hooks. Raven gobbled their bait, swimming from one hook to another. Each time Raven stole bait, the fishermen felt a tug on their lines. When the lines were pulled in, there was neither fish nor bait.

But Raven worked his trick once too often. When Houskana, an expert fisherman, felt a tug, he jerked his line quickly, hooking something heavy. Raven's jaw had caught on the hook! While Houskana tugged on his line, Raven pulled in the opposite direction.

Then Raven grabbed hold of some rocks at the bottom of the sea and called, "O rocks, please help me!" But the rocks paid no attention.

Because of his great pain, Raven said to his jaw, "Break off, O jaw, for I am too tired." His jaw obeyed, and it broke off.

Houskana pulled in his line immediately. On his hook was a man's jaw with a long white beard ! It looked horrible enough to scare anyone. Houskana and the other fishermen were very frightened, because they thought the jaw might belong to some evil spirit. They picked up their feet and ran as fast as they could to the chief's house.

Raven came out of the water and followed the fishermen. Though he was in great pain for lack of his jaw, no one noticed anything wrong because he covered the lower part of his face with his blanket.

The chief and the people examined the jaw that was hanging on the halibut hook. It was handed from one to another, and finally to Raven who said, "Oh, this is a wonder to behold!" as he threw back his blanket and replaced his jaw.

Raven performed his magic so quickly that no one had time to see what was happening. As soon as Raven's jaw was firmly in place again, he turned himself into a bird and flew out through the smoke hole of the chief's house. Only then did the people begin to realize it was the trickster Raven who had stolen their bait and been hooked on Houskana's fishing line.

On the totem pole, Raven was carved, not as the old man, but as himself without his beak, a reminder of how the old man lost his jaw.