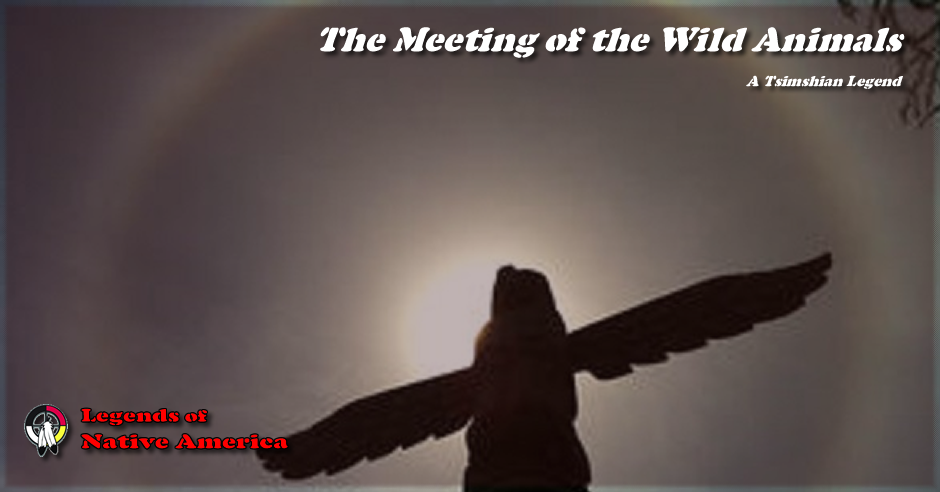 A long time ago, when the Tsimshian lived on the upper Skeen River in Prairie Town, they were the cleverest and strongest of all humans. They were good hunters and caught many animals. They went hunting the whole year round, and all the animals feared for their survival.

Grizzly Bear invited all the large animals to his house. "A terrible calamity has come to us with these hunting people, who pursue us even into our dens," he said. "I suggest we ask Him Who Made Us to give us more cold in winter and keep the hunters in their own houses and out of our dens!" All the large animals agreed, and Wolf said, "Let's invite all the small animals -- Porcupine, Beaver, Racoon, Marten, Mink, and even the really small ones such as Mouse and the insects -- to join us and increase our strength."

Then the chief speaker, Grizzly Bear, rose. "Friends," he said to the small animals and the insects. "you know very well how the people hunt us on mountains and hills, even pursuing us into our dens. Therefore, my brothers, we large animals have agreed to ask Him Who Made Us to give our earth cold winters, colder than ever, so that the people who hunt us cannot come to our dens and kill us and you! Large animals, is this so?"

The Panther said, "I fully support this wise counsel," and all the large animals agreed. Grizzly Bear turned to the small animals and said, "We want to know what you think of in this matter." The small animals did not reply at first. After they had been silent for a while, Porcupine rose and said, "Friends, let me say a word or two in response. Your strategy is very good for you, because all of you have plenty of warm fur for the most severe cold. But look at these little insects. They have no fur at all to warm them in the winter. Moreover, how can insects and small animals obtain food if winters are colder? Therefore I say this: don't ask for more cold." Then he sat down.

Grizzly Bear rose again. "We need not pay attention to what Porcupine says," he told the large animals. "You all agree, don't you, that we should ask for the severest cold on earth?" The large animals replied, "Yes, we do. We don't care for Porcupine's reasoning."

"Now, listen once more! I will ask you just one question," Porcupine said. "If it's that cold, the roots of the wild berries will freeze and die, and all the plants of the prairie will wither away. How will you get food? You large animals always roam the mountains wanting something to eat. When your request brings more winter frost, you will die of starvation in spring or summer. But we will survive, for we live on the bark of trees, the very small animals eat the gum of trees, and the smallest insects find their food in the earth."

After he had spoken, Porcupine put his thumb into his mouth, bit it off, said, "Confound it!" and threw his thumb out of his mouth to show the large animals how bold he was. He sat down again, full of rage. Therefore the hand of the Porcupine has only four fingers, no thumb.

The large animals were speechless at Porcupine's wisdom. Finally Grizzly Bear admitted, "It's true what you have said." And the large animals chose Porcupine as their wise man and as the first among the small animals.

Together all the animals agreed that the cold in winter should be the way it is now. And they settled on six months for winter and six months for summer.

Then Porcupine spoke again in his wisdom: "In winter we will have ice and snow. In spring we will have showers, and the plants will become green. In summer we will have warmer weather, and all the fishes will go up the rivers. In the fall the leaves will drop, it will rain, and the rivers and brooks will overflow. Then all animals, large and small, and those that creep on the ground, will go into their dens and hide for six months." And after they had all agreed to what Porcupine had proposed, they happily returned to their homes.

That's why wild animals, large and small, take to their dens in winter. Only Porcupine does not hide, but goes about visiting his neighbours. Porcupine also went to the animals who had slighted him at the meeting and struck them dead with the quills of his tail. That's why all the animals are afraid of Porcupine to this day.