The Bear Who Married a Woman 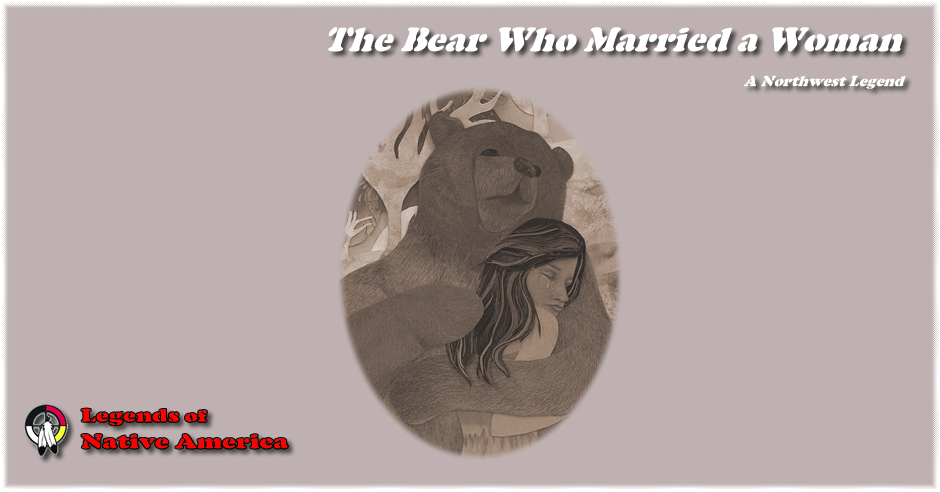 Once upon a time there lived a widow of the tribe of the Gispaxlâ'ts. Many men tried to marry her daughter, but she declined them all.

The mother said, "When a man comes to marry you, feel of the palms of his hands. If they are soft, decline him. If they are rough, accept him." She meant that she wanted to have for a son-in-law a man skillful in building canoes.

Her daughter obeyed her commands and refused the wooings of all young men. One night a youth came to her bed. The palms of his hands were very rough, and therefore she accepted his suit. Early in the morning, however, he had suddenly disappeared, even before she had seen him.

When her mother arose early in the morning and went out, she found a halibut on the beach in front of the house, although it was midwinter. The following evening the young man came back, but disappeared again before the dawn of the day. In the morning the widow found a seal in front of the house. Thus they lived for some time. The young woman never saw the face of her husband; but every morning she found an animal on the beach, every day a larger one. Thus the widow came to be very rich.

She was anxious to see her son-in-law, and one day she waited until he arrived. Suddenly she saw a red bear emerge from the water. He carried a whale on each side, and put them down on the beach. As soon as he noticed that he was observed, he was transformed into a rock, which may be seen up to this day. He was a supernatural being of the sea.