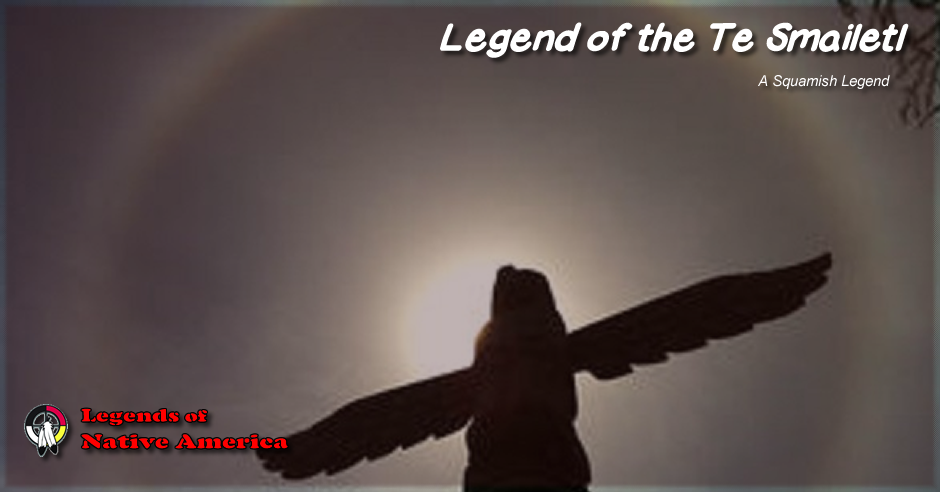 Once there was a [Squamish] chief who had an only daughter. He possessed also a male slave. Now this slave was accustomed to sleep at the foot of the daughter‘s bed, his bed lying crosswise at the foot of hers.

One night he crept to her side and ravished her while she slept. Some little while later she found herself with child, but was wholly ignorant of the person who had brought this shame upon her, not knowing that the slave had lain with her in her sleep. When she once realizes her condition she is anxious to find out who had visited her, and suspecting that the intruder would pay her another visit some night, she takes some paint and smears it all over the palms of her hands. Shortly after, the slave pays her a second visit. As it is dark she cannot discover who he is, but before he leaves her this time she presses her paint-smeared hands upon his shoulders and leaves thereon an impression of them without his knowledge.

In the morning she is greatly surprised to find that it was the slave who had visited her and whom she had painted on the shoulders. When the chief became conscious of his daughter‘s condition he was overwhelmed with shame. And, on learning who it was who had caused this disgrace to fall upon him, he took both the guilty slave and his hapless daughter away in his canoe, and, arriving at a certain lofty cliff which overhung the water, he landed them at its base and left them there to perish together. But, although the cliff was always regarded as inaccessible, in some mysterious way the pair managed to climb it. † After they had reached the top they travelled inland amongst the mountains till they came to a lake. Here they stopped and built themselves a house, and here the girl gave birth to her child.

In course of time many other children were born to them, and when these had come to maturity, as there were no others with whom they could mate, they took each other to husband and wife, and in time a large community grew up around the lake. Though living in a wild state, without proper tools or other utensils, they never forgot their mother‘s speech, but always conversed together in Squamish. The men were exceedingly tall and very keen of scent and great hunters. They always dressed in garments made from the untanned skins of the animals they had slain. From this habit they were called by the Squamish, Smailetl, or wild people.