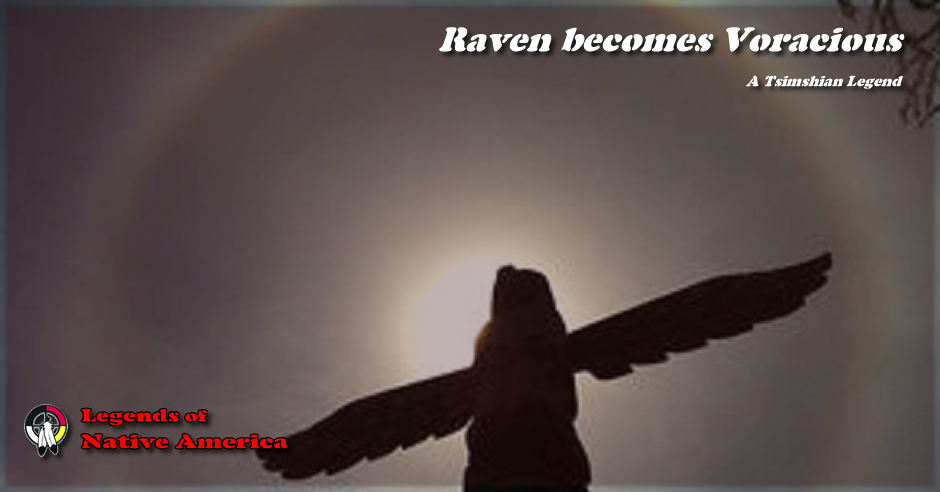 At one time the whole world was covered with darkness. At the southern point of Queen Charlotte Islands there was a town in which the animals lived. Its name was Kungalas.

A chief and his wife were living there, and with them a boy, their only child, who was loved very much by his parents. Therefore his father tried to keep him out of danger. He built for his son a bed above his own, in the rear of his large house. He washed him regularly, and the boy grew up to be a youth.

When he was quite large the youth became ill, and, being very sick, it was not long before he died. Therefore the hearts of his parents were very sad. They cried on account of their beloved child. The chief invited his tribe, and all the (animal) people went to the chief's house and entered. Then the chief ordered the child's body to be laid out; and he said, "Take out his intestines."

His attendants laid out the body of the chief's child, took out the intestines, burned them at the rear of the chief's house, and placed the body on the bed which his father had built for his son. The chief and the chieftainess wailed every morning under the corpse of their dead son, and his tribe cried with them. They did so every day after the young man's death.

One morning before daylight came, the chieftainess went again to wail. She arose, and looked up to where her son was lying. There she saw a youth, bright as fire, lying where the body of their son had been. Therefore she called her husband, and said to him, "Our beloved child has come back to life." Therefore the chief arose and went to the foot of the ladder which reached to the place where the body had been. He went up to his son, and said, "Is it you, my beloved son? Is it you?" Then the shining youth said, "Yes, it is I." Then suddenly gladness touched the hearts of the parents.

The tribe entered again to console their chief and their chieftainess. When the people entered, they were much surprised to see the shining youth there. He spoke to them. "Heaven was much annoyed by your constant wailing, so He sent me down to comfort your minds." The great tribe of the chief were very glad because the prince lived again among them. His parents loved him more than ever.

The shining youth ate very little. He staid there a long time, and he did not eat at all; he only chewed a little fat, but he did not eat any. The chief had two great slaves--a miserable man and his wife. The great slaves were called Mouth At Each End. Every morning they brought all kinds of food into the house. One day, when they came in from where they had been, they brought a large cut of whale meat. They threw it on the fire and ate it. They did this every time they came back from hunting. Then the chieftainess tried to give food to her son who had come back to life, but he declined it and lived without food.

The chieftainess was very anxious to give her son something to eat. She was afraid that her son would die again. On the following day the shining youth took a walk to refresh himself. As soon as he had gone out, the chief went up the ladder to where he thought his son had his bed. Behold, there was the corpse of his own son! Nevertheless he loved his new child.

Therefore the prince replied, "I will also try the scabs you speak about." Then the slave-woman said, "No, my dear! Don't desire to be as we are." The prince repeated, "I will just taste it and spit it out again." The male slave cut off a small piece of whale meat and put in a small scab. Then the female slave scolded her husband for what he was doing. "O bad man! what have you been doing to the poor prince?" The shining prince took up the piece of meat with the scab in it, put it into his mouth, tasted it, and spit it out again.

Then he went back to his bed. When the chief and the chieftainess came back from their visit, the prince said to his mother, "Mother, I am very hungry." The chieftainess said at once, "Oh, dear, is it true, is it true?" She ordered her slaves to feed her beloved son with rich food. The slaves prepared rich food, and the youth ate it all. Again he was very hungry and ate everything, and the slaves gave him more to eat than before.

Therefore the chief invited all the people in, and said, "I will send my child away before he eats all our provisions and we lack food." Then all the people agreed to what the chief had said. As soon as they had all agreed, the chief called his son. He told him to sit down in the rear of the house. As soon as he had sat down there, the chief spoke to his son, and said, "My dear son, I shall send you away inland to the other side of the ocean."

He gave his son a small round stone and a raven blanket and a dried sea-lion bladder filled with all kinds of berries. The chief said to his son, "When you fly across the ocean and feel weary, drop this round stone on the sea, and you shall find rest on it; and when you reach the mainland, scatter the various kinds of fruit all over the land; and also scatter the salmon roe in all the rivers and brooks, and also the trout roe; so that you may not lack food as long as you live in this world."

Then he started. His father named him Giant.